I have a question about the DDR4 trace routing on the server main board.

For clock and DQS signals, are they both considered differential signals?

I checked the Intel PDG; it shows that two specs for the impedance control on these signals.

I also saw a spec for clock and DQS in another layout guideline. It says that the trace of these signals should be routed as a "pseudo differential pair", which means that we should first consider one trace as single-ended (here the spec defines 50 Ohm), and then try to meet the spacing as in the spec.

Again, why should we define the single-ended impedance for a differential pair? 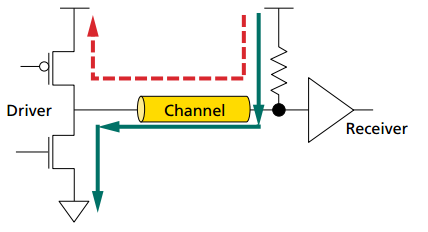 P.S. Strongly speaking, JEDEC Standard for DDR4 does not introduce DQS's clearly as "differential pairs", instead, it states the following in short (that "in full" is described in it later):

The data strobe DQS_t, DQSL_t and DQSU_t are paired with differential signals DQS_c, DQSL_c, and DQSU_c, respectively, to provide differential pair signaling to the system during reads and writes. DDR4 SDRAM supports differential data strobe only and does not support single-ended.

Compare that with the introduction of CK's signals in the same document:

CK_t and CK_c are differential clock inputs. All address and control input signals are sampled on the crossing of the positive edge of CK_t and negative edge of CK_c.

Not the answer you're looking for? Browse other questions tagged pcb pcb-design differential ddr or ask your own question.