How can I 'stretch' a signal in time using analog components?

How can a signal (e.g. an analog radio signal) be 'stretched' in time, so that the frequency is halved and the signal takes twice as much time? It's straightforward to do in a computer, but can it be done with analog components?

The transform I'm looking for is the same as recording an audio tape and then playing it at half the speed, so translating an input signal of for example

(This is different from what a heterodyne radio receiver does: it shifts a signal from a high to a lower frequency, but the signal still takes up the same amount of time.)

Recording and reading back at a slower speed would be one way to do this, but that would require slow mechanical components and not be able to deal with faster signals.

Background: I'm not building anything for which I need this, but I'm wondering if something like time division multiplexing could work in the pre-digital age or what it would take to create it. That is also why a method like recording to tape and slowed down playback would not work. If the multiplexed pieces of signal are short, the mechanical systems of a tape would not be able to keep up.

Edit The relation with time division multiplexing: I was thinking that tdm could be implemented with such a technique. Take two continuous signals, split them up into (say) microsecond intervals, squeeze each microsecond into half a microsecond (increasing the frequency), then interleave the squeezed segments of signal from both streams. To demodulate, reverse the process by stretching the odd or even intervals.

There IS one analog technology that can be used to do the job ... the CCD "bucket brigade" delay line.

It IS analog, but it has a lot in common with digital techniques in that it's a sampled-data system.

A typical CCD delay line has 512 or 1024 capacitors in a line, and a network of CMOS switches to interconnect them. It works roughly as follows:

The general idea is like a line of people passing buckets to one another, to try to fight a fire.

At this point, if you want to change the pitch, you need to store new data into a second CCD at the input sample rate, while you empty the first one at the new sample rate (in your case, half the original clock rate).

As the second CCD is full while the first is only half empty, you now have a problem : you have to dump some of the data. If you have more than 2 CCD delay lines you can "conceal" the joins by cross-fading from one to the other, while filling up a third, but it isn't a perfect technique.

CCDs have pretty poor noise and distortion specs, along with all the spectral and aliasing problems of digital audio, so you won't hear much about them this side of 1980.

One such example is the SAD1024 (datasheet here) used as a pitch shifter (with continually varying pitch, aka a flanger) here

I'd suggest recording the signal on a tape and playing it back at half the speed.

I cannot follow the reason why that does not satisfy you. Of course you could use other media (e.g. wires, disks etc.); the basic principle is the same.

If none of that is good for you, you have to specify the requirements further.

If the signal is periodic, then you can always use a sampling oscilloscope.

I mean, you can use any ADC provided its aperture window and jitter is small enough, but you asked for analog, so you gonna have to use the old diode bridge sampler like the wizards of old did... 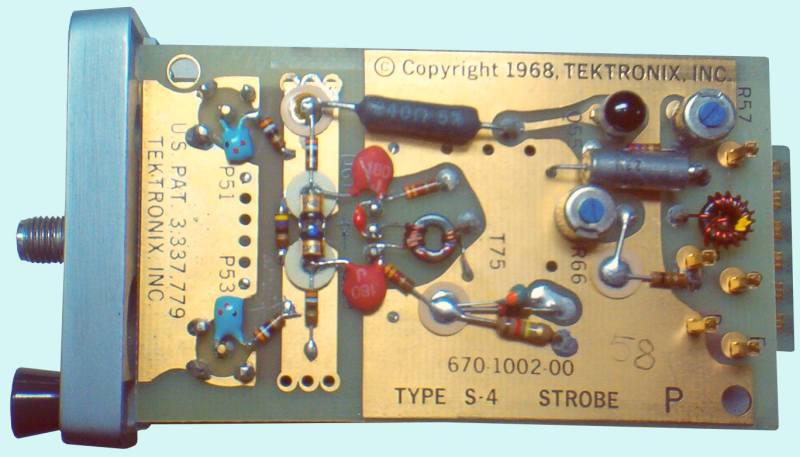 Other than firing a rocket that travels at half the speed of light and so stretches out the received signal, you need something that stores a sample of what you receive and then plays it back at a slower rate. Ultimately this means you never catch up with what was originally transmitted i.e. you have to store and play back at a slower rate. An analogue tape does this just fine but if you want this in IC form then digital storage methods are the best way.

Start with a chirped laser pulse that sweeps in wavelength. This can be generated by taking a very narrow, wideband pulse and sending it through a length of dispersion compensation fiber. Then amplitude modulate the chirped pulse with the signal you want to stretch. Then send the modulated pulse through a nice long piece of dispersion compensation fiber.

There's really no connection to TDM. Although the PSTN was digital before TDM was adopted, the same concept works with analog samples.

You just need to pick a sample rate that captures the information you want. Continuing with the PSTN example, that would be a sample rate of 8000 Hz, which captures audio falling in the range of 300-3400 Hz.

To interleave N voice channels, you need a communications channel that can handle 8000 × N samples/second. You send one sample from each of the voice channels, in succession, and then start the whole sequence over again 1/8000 second (125 µs) later.

You can either sample all of the voice channels simultaneously and then delay the samples by some fraction of 125 µs according to their channel number, or you can simply shift the phase of the sampling for each channel to begin with (which is what most PSTN equipment does).

The bottom line is, there's no need for "time compression" if the TDM frame rate matches the sample rate required for the individual channels.

This really can't be done analog. While people have thrown out a bunch of neat and interesting ideas, passive analog circuits can only (1) shift phase and (2) attenuate. Everything they can do is limited to this, which can be expressed mathematically by the transfer function (which will multiply all information in frequency domain by a complex function that both shifts the angle and attenuates the amplitude).

If you go for amplification as an analog active addition, obviously you can also boost some frequencies - but really that is all you get that is more.

There are ideas like bucket brigades, but as noted this is really going digital (or at least quasi-digital). In the old days, the idea of recording on one speed on tape and playing back at half speed is really the only practical approach.

This sort of thing is much easier to do digitally. Even there, however, you need to be clear about what you want. If you want to start at t=0 and stretch a signal that goes to t=1 and get it to come out over twice the time at the same initial time (so, output 0

It seems that you are providing the best answer yourself. You state, "It's straight forward to do in a computer." All you need then, is an "appropriate" A-D converter to feed the signal to the computer, and then a D-A converter to give you the final signal. The computer will give you all the flexibility you might need to process the signal.

Not the answer you're looking for? Browse other questions tagged analog signal-processing or ask your own question.