How can I make an Arduino accelerometer?

I'm helping a friend with a physics high school project and we are thinking about doing some rockets fueled with chemicals and a chain reaction for launching.

The general idea is: the first rocket will be launched manually, but when it starts to fall (velocity reaches 0 and acceleration becomes negative on the y-axis) an Arduino will release a lock to the second rocket, and so on. In order to do that, we would need some way to measure the acceleration of the rockets on air. Googling it a little, I've found some stuff about XBee devices, but it would make the project quite expensive.

Can you guys suggest me any other techniques?

The general idea is: the first rocket will be launched manually, but when it starts to fall (velocity reaches 0 and acceleration becomes negative on the y-axis)

You can use an accelerometer, it measures acceleration. In freefall the accelerometer measures zero on all axis. That is easy to detect. 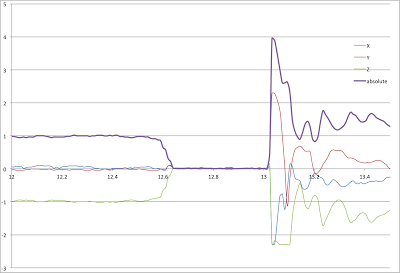 Accelerometers aren't expensive. Sparkfun sells various boards with analog and digital ones for around 10-20 USD. Just make sure you do not exceed the absolute maximum ratings.

There is a basic physics flaw in what you are trying to do. The problem is that the acceleration of the rocket measured in its own inertial frame is 0 as soon as the engine cuts out. A accelerometer is useless in finding the 0 velocity point where the rocket is at its highest altitude.

What you want to do is measure altitude, not acceleration. Look for things called altimeters. Release the next rocket when the altitude value levels off or starts going down again.

A arduino is also inappropriate here. On a rocket, size and weight matter a lot. You want to strip down this circuit to the smallest size and weight you can, so starting with something large designed for totally different tradeoffs makes no sense.

Use a small microcontroller directly. With the right electronics, maybe even a 8 bit A/D is good enough. Actually, even just a comparator input would be good enough with a analog circuit that gives you the derivative of the altitude. Something like a PIC 10F204 may be all you need. That has a built-in comparator. The rest is simple firmware to sequence, control, and time the process of starting the next rocket engine. A major feature of the 10F204 is that it comes in the tiny and light SOT23 package.

Not the answer you're looking for? Browse other questions tagged arduino accelerometer xbee or ask your own question.