Is it safe to use narrow but short PCB traces for high current flow?

I am trying to design a PCB which has high current traces on it.

According to this calculator 5mm width is enough to hold 15 Amps current flow at 70 °C. However, due to some design limitations I need to get the PCB trace narrower as 2mm.

For 2mm width trace, the calculator points that it can hold 11.2 Amps current flow at 125 °C which is too high. To demonstrate the situation please look at the PCB layout below: 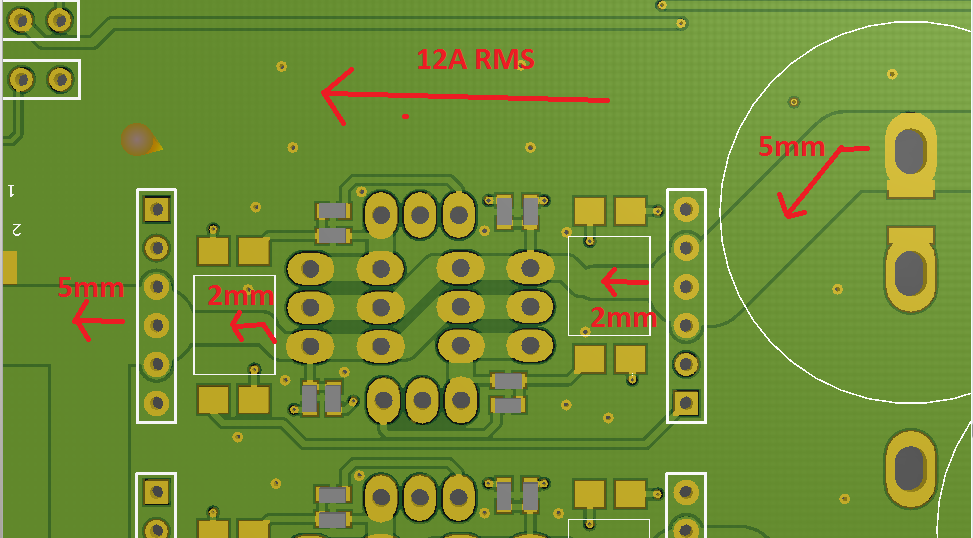 My question is, what happens if I put this PCB on work? I tried to keep narrow high current lines as short as possible but they are inevidable. I want to think that the thermal rise on narrow lines will be distributed over wide lines since they are conducted however, I am not really sure what will happen. Will those narrow lines burn out somehow? If so what are your practical advices?

I would recommend you to expose solder mask on that trace and use solder to thicken the trace. This is the usual way to increase current capability of such trace.

Copper foil will move the heat vertically into the air or into underlying traces or planes through the FR-4.

And the copper foil will move the heat laterally through the trace. The lateral thermal_resistance of 1 ounce/foot^2 foil is 70 degree Cent per watt per square.

From middle of the 200 mils to either end will be 350 degree Centigrade per watt.

Assuming heat is uniformly generated (a wrong assumption, because copper has 0.4% per degree Cent temperature coefficient) and that heat only flows along the trace, you'll get a parabolic rise in temperature from either end to middle of that 0.2" trace. For simplicity, assume you have 2 milliiWatts of heat generated in the entire 0.2" long (20 mil wide) trace. Assume 1mW needs to flow through 0.1" of trace, from middle to end. The R_thermal is 350 degree Centigrade per watt, thus only 3.5 degree Cent rise.

Not the answer you're looking for? Browse other questions tagged pcb pcb-design analog power-electronics high-current or ask your own question.