Does modern market has IC chips which can be fully reverse-engineered with optical microscope?

I'm planning a new course on digital electronics and semiconductors devices for my university. I think, it would be great to go to the lowest available level of abstraction, or, at least, slightly touch.

So, I naively think it would probably be a good lab assignment for students to grab microscopes and some acid, and try to completely reverse-engineer some simple chip. By “reverse-engineering” I mean not only looking at the picture of naked gates and conducting lines, but restoring the original model of the chip operation, without probing it electrically.

Back in history, it was quite common to have micrometer-scale integrated circuits which had only a dozen of isolated logic gates in a single package. Is it possible to buy something similar today?

I think the 4000 series chips remain at the micron level of fabrication (\$3\:\mu\$ metal gate and not self-aligned) technology. As a percentage of operating FABs, there are less of them still operating at this fabrication level. But they exist. (I like to think of it as a "hand-me-down" kind of process, where older FABs still perfectly operational and more cheaply supported now, get passed on to those who can make good use of them.) Some of these FABs wind up making things like detector diodes (which of course need to be 'large'.) Some for other reasons.

Many ICs destined for use in satellites in space must also have large feature sizes in order to tolerate radiation events. Even some (semi-) higher-end microcontrollers, for example, are still made with large feature sizes for those purposes. (I know because I worked on them, some time ago, as part of writing operating systems that are tolerant to such soft error events.)

I'd recommend contacting a few of the major companies and simply asking them for some good ideas, here. I think you'd find the response welcoming and positive. That's been my experience in the past. If you explain your goals, which seem quite reasonable to me, I'm sure you'd quickly find someone who'd help you think about the best way to develop the curriculum for it and to suggest some good alternatives to consider.

(Besides, if you involved them you would have zero worries about someone later giving you a phone call and asking about why you are exposing their "proprietary" devices in a classroom setting.)

So, to start, you should grab up some 4000 series devices and just "do it." See what you find. If that satisfies your need, you're golden. (I think they will, as there is quite a variety of devices there.)

Second, if you want to expose a microcontroller for classroom demonstration purposes (and not as a difficult assignment, which it probably would be), search out microcontrollers that are still being used for satellite use in space. These are so-called "radiation-hardened" but part of that hardening is about the feature size they use! So look for that, if it is of interest.

Third, contact a few companies and just ask for some ideas and help. I think you'll get it.

Is it possible to buy something similar today?

Yes, if you restrict yourself to simple chips like opamps, timers, standard logic.

Anything more advanced and that might already be the simplest and cheapest of microcontroller, then no, these mostly use processes with such small feature size that you probably would need an electron microscope. Also there's not much to learn if you do not know what you're looking at.

Also, getting a usable die photograph takes a lot of effort, time your students can spend in better ways.

Focus on digital: well the digital chips are also the ones with the most boring dies. The ones with like 100 k gates or more on them I mean. Have you looked at ZeptoBars yet and also at Electron Update ? If not do so and judge for yourself. The most interesting parts are the Analog parts. I know that as I design such structures myself ;-)

In old, simple, "vintage" chips the digital was designed by hand, those are interesting. In modern chips it is all syntesized and thus boring.

You could consider the venerable LM555 timer chip. You can find detailed schematics of the internals, high resolution die photos, and lucid explanations from the original designer.

Of course if you wish the students to discover it for themselves, having the die photos etc. freely available on the internet may be a disadvantage. 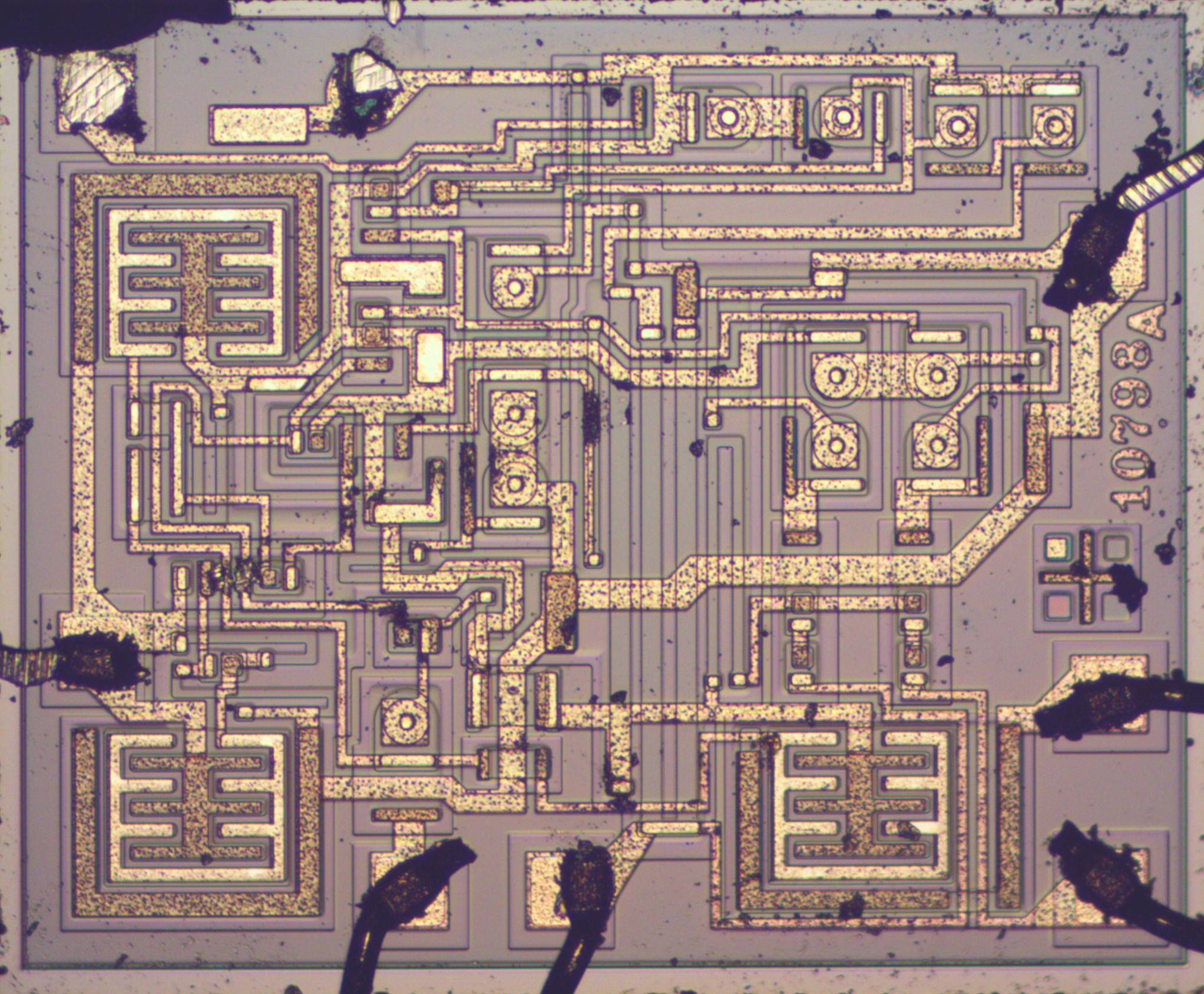 There's a bit of analog and a bit of digital in there- an SR flip-flop and two comparators with a 3-resistor divider across the power supply. All together only a couple dozen transistors.

Yes, you can still buy "old" designs, and there is little chance that would change soon.

For the very popular 74xx series of ICs, check out https://project5474.org/ which is a project to decap all of these "classic" chips, which are still being built into billions of devices to this day, and document the die shots.

I think this would allow you to pick an interesting IC before doing your first own decap.

You might want to just visually compare different kind of ICs qualitatively - simple, purely analog ICs like the NE555 and the (personally, probably easier to explain if you're into frequency mixers) SA612 simply look very different.

An idea to avoid dozens of students messing around with dangerous chemicals:

Look at LEDs that integrate a digital controller. I'm thinking of the neopixel things. They come in clear package, because the light has to exit somewhere! You might be able to polish the surface of the polymer that covers the die to be flat.

I also would like to encourage you to follow jonk's advice and ask manufacturers. They might even be giving you cut dies without the package around them - after all, that is a shape that they offer commercially for a lot of their "low end, high volume" devices for companies which directly bond the dies to the PCB and just encase them with a blob of epoxy. If that doesn't work out: I'm sure someone on aliexpress will happily sell you a couple hundred "music playing postcard" dies.

Also, a lot of ICs are available in lfcsp, lead-free chip-scale packages, where you'd only have to remove a thin layer of lacquer instead of a whole millimeter-thick package

Not the answer you're looking for? Browse other questions tagged integrated-circuit reverse-engineering or ask your own question.

0
If an IC has an external resistor for timing, can that be replaced with an analog voltage out from another IC?