Contexte: a DIY small wind turbine pancake generator, made with 2 rotor plates of 12 rectangular magnets, and one stator of 9 coil wired. After the generator, the 3 alternative electricity phases are transformed into direct current thanks to 3 bridges rectifier (one for each phase). After the rectifier, a LM317 circuit limits the voltage, in order to load battery, or an arduino board, or any else device.

Problem: at low speed of wind, when the generator charges a battery (or load arduino board, etc ...), the load generates a break onto the rotation of the wind turbine. The power of wind is not enough to maintain the rotation speed face to the reverse force generated by the load of the devices.

Question : Every things being equal, does the break phenomenon will be less important if we put magnets with low force (but with same shape) ?

Additional informations: Currently, I have build a DIY generator for a DIY vertical axis mini-wind-turbine. This generator is made with magnets and coils. The magnets currently used are very strong. The resistivity when it charges a battery is too important when wind is very low. Then, I wander if reducing the strength of magnets, choosing magnets with same surface, same shape of surface, but less strong than those currently used, without changing anything else, will reduce the resistivity ?

Said differently: For a pancake type generator, what will the effect of a reduce of the magnetism force of magnets (keeping the same magnet surface shape x*y, but decreasing the height h, the thickness) on the reverse electro magnetic force created when this pancake type generator is run by a mini wind turbine and feeds a charge (like a battery).

To better understand the system, I give you this following little sketch. You can see the general system. The type of pancake generator I'm talking about. The effect on rotation per minute when the generator loads a battery and when it does not, for a same low wind speed. And the question about the magnets. 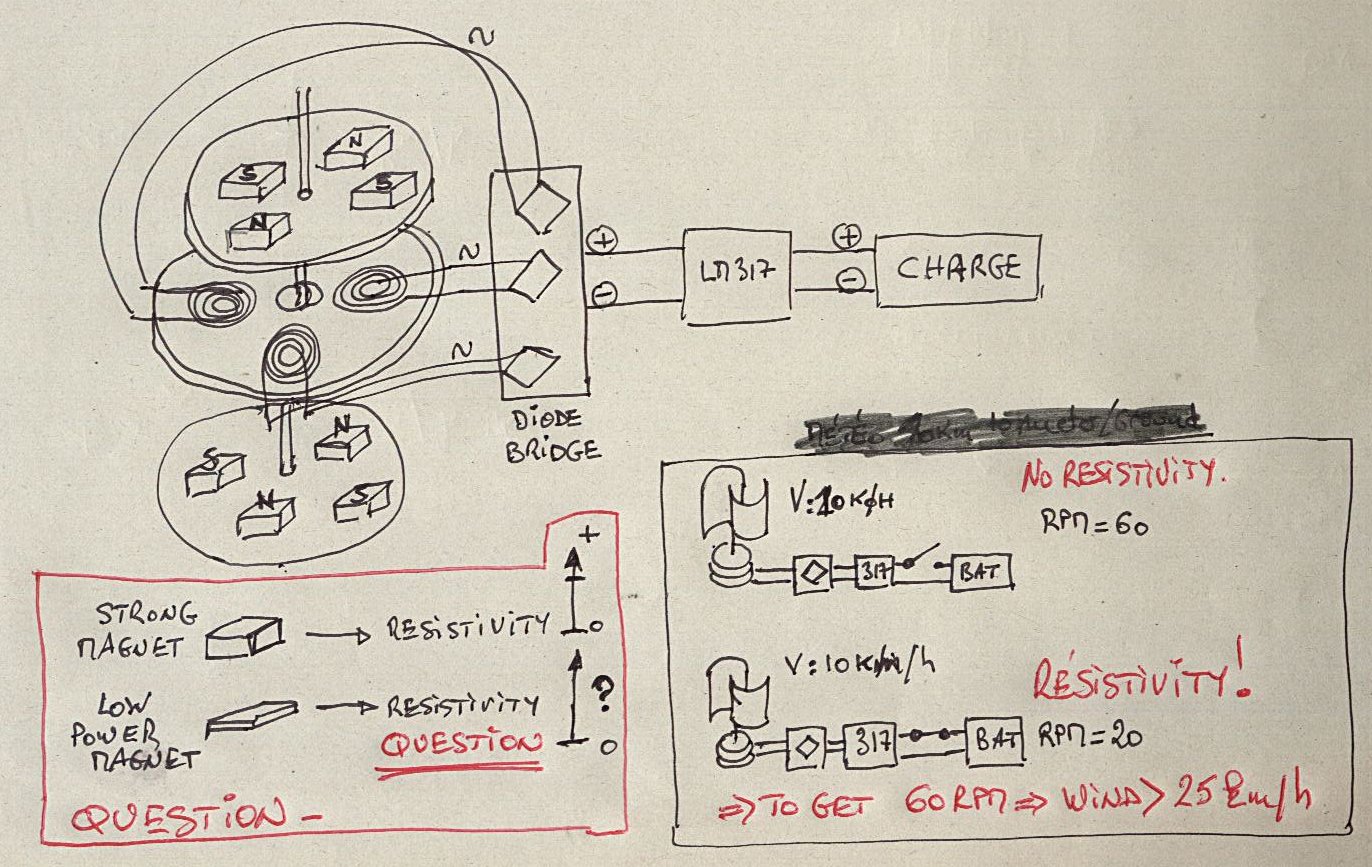 My question is really focused on effect of the change of magnet force, regarding the RPM when appears the reverse electromagnetic force due the load of a device, everything else equal. Will the RPM be less slowed with lower force magnets ?

Whatever the effect on voltage or intensity, the question is really only focused on effect of the change of magnet force.

I find it convenient to think of problems like this in terms of energy conservation. So let's put some numbers to it.

For the moment let's assume no losses in the system. The electrical power put out by the generator must equal the mechanical power put into the turbine.

In low wind, you want to keep torque \$\tau\$ low. Otherwise the turbine may not even overcome static friction, and not turn at all.

While the product of torque and angular velocity is fixed by the amount of power available from the wind, their proportionality is not. Theoretically, you could add a mechanical gearbox so the turbine spins with less torque but at a faster angular velocity, ideal for low wind.

In high wind you wouldn't want the turbine to spin too fast, so the gearbox could work the other way: spin with more torque but a lower angular velocity.

The ideal gearbox would have no losses, and be continuously variable so the turbine can spin at the optimal speed in all wind conditions. Unfortunately such a gearbox would be very expensive and complex, and even so probably not all that efficient.

Fortunately, you can implement the "gearbox" on the electrical side of the system.

If you want to reduce torque, you must reduce current. But you don't get to choose the power: that's decided by the wind. So to maintain power, according to equation 3, you must simultaneously increase voltage.

Generators produce voltage as described by Faraday's law of induction:

The induced electromotive force in any closed circuit is equal to the negative of the time rate of change of the magnetic flux enclosed by the circuit.

In the generator, this magnetic flux is the rotor moving through the stator field. Your permanent magnet stator provides the magnetic flux, the rotor windings are the thing enclosing the flux, and the rotation of the rotor makes the flux change. So reducing the voltage could be accomplished by:

Spinning the rotor slower is the opposite of what we hoped to accomplish, but the other two options are valid. Using weaker magnets would decrease the strength of the stator field, and perhaps allow cheaper magnets. Using fewer turns in the rotor windings accomplishes the same thing, and allows thicker wire to be used, which reduces resistive losses in the wire.

So there's the answer to your first question: weaker magnets would indeed reduce torque, and thus the turbine would spin faster. You've effectively modified the "electrical gearbox" of the generator.

The trouble is now, what happens if the wind is strong? It would be more convenient if the "gearbox" was variable, but we can't exactly mechanically modify the generator to suit every wind condition.

There's another way to adjust the proportionality of voltage and current in an electrical system while keeping power constant: a switch-mode power supply (or perhaps it should be called a converter).

Generators optimised for small wind turmbines, where self starting at low windspeeds is important, are usually ironless - i.e. the stator coils usually have no iron cores.

This means that in the absence of electrical load, there is no torque required to turn the generator (over and above the bearing friction and air resistance of the whole assembly).

Downside of an ironless stator is that the magnetic field strength is reduced because the air gap is increased - and the solution is to use the strongest possible permanent magnets, rather than weaker ones.

So I'm guessing the "resistivity" you are talking about is the "cogging" caused by attraction between your permanent magnet rotor, and the iron (probably laminated) cores in your stator coils. Then the solution is not to reduce the problem, by weakening the magnets, but eliminate it, by using an ironless generator.

My go-to ste for this is Scoraig Wind, which includes a free guide to building an effective wind turbine and generator.

By resistivity I take it you mean the terminal resistance (ie the resistance of the stator). This is a characteristic of the stator windings & is not influenced by the strength of the rotor magnets. To decrease the resistance you need to use higher guage wiring, reduction in the number of turns or a different material

By resistivity, do you actually mean impedance (R +jwL). This is a characteristic of the stator reluctance and the windings. To reduce it you would need to improve the reluctance of the stator corepack, reduce the number of winding turns.

If you reduce the magnet strength it will reduce the voltage produced. To compensate for this you need to increase the number of turns in the stator windings, which increases their electrical resistance and reduces the charging current. Lower current = lower torque load, so it will turn easier. However the higher winding resistance causes greater power loss, so it will be less efficient.

You could get the same effect by adding external resistance into the charging circuit, or even better use a MPPT (Maximum Power Point Tracking) circuit to extract maximum possible power from the generator without slowing it down too much.

47
How can I implement regenerative braking of a DC motor?
25
Why should I worry about a motor causing my supply voltage to shoot up when the back-EMF can't exceed the supply voltage?
0
Conception details for an electric generator (wire diwm. length, magnets size/force)
-1
Minimal information energy conversions

4
How does a wind turbine protect the bank from a reversal in polarity when spin direction is reversed?
1
DC motor as a generator: characteristics
2
Moving the magnetic field around a fixed conductor?
1
Wind turbine design question
0
Is my rotor/stator configuration correct?
0
Permanet Magnet Generator - Torque
0
What happens to the generator if we don't consume the generated electricity from generator? Only theoretical explanations, please
0
Conception details for an electric generator (wire diwm. length, magnets size/force)