ISA opcodes---Where do they come from?

When engineers are designing an instruction set architecture, by what procedure or protocol, if any, do they follow when designating certain binary codes as instructions. For example, if I have an ISA that says 10110 is a load instruction, where did that binary number come from? Was it modeled from a state table for a finite state machine representing a load operation?

In a lot of cases, the choice is pretty arbitrary or based on "wherever it fits best" as ISAs grow over time. However, the MOS 6502 is a wonderful example of a chip where the ISA design was heavily influenced by trying to squeeze as much as possible out of limited transistors.

Check out this video explaining how the 6502 was reverse engineered, particularly from 34:20 onwards.

The 6502 is an 8-bit microprocessor introduced in 1975. Although it had 60% fewer gates than the Z80 it was twice as fast, and although it was more constrained (in terms of registers etc.), it made up for that with an elegant instruction set.

It contains just 3510 transistors, which were drawn out, by hand, by a small team of people crawling over some large plastic sheets which were later optically shrunk down, forming the various layers of the 6502.

As you can see below, the 6502 passes the instruction opcode and timing data into the decode ROM, then passes it into a "random control logic" component whose purpose is probably to overrule the ROM's output in certain complex situations. 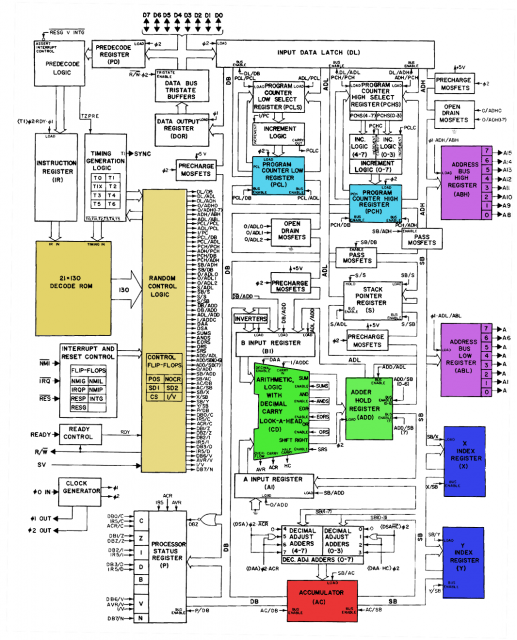 At 37:00 in the video you can see a table of the decode ROM which shows what conditions the inputs must satisfy to get a "1" for a given control output. You can also find it on this page.

You can see that most of the things in this table have Xs in various positions. Let's take for instance

This means the first 3 bits of the opcode must be 011, and G must be 2; nothing else matters. If so, the output named RORRORA will go true. All the ROR opcodes start with 011; but there are other instructions which start with 011 also. These probably need to be filtered out by the "random control logic" unit.

The page I mentioned above says that some of the output lines in the ROM appear twice, "We assume this has been done because they had no way of routing the output of some line where they wanted, so they put the same line at a different location again." I can just imagine the engineers hand-drawing those gates one by one and suddenly realising a flaw in the design and trying to come up with a way to avoid re-starting the whole process.

It depends how old the ISA is.

In the early days of hand design, and even more so when CPUs were assembled from discrete logic, the logic design would have come first, and been extensively minimised, and then the ISA bit patterns would have been whatever values were required to make that minimal logic work.

So there may be a particular pattern of control signals that enable some multiplexers to connect the ALU output to the input of the GP register file, a few more control signals that instruct the ALU to add, subtract, AND, OR etc, and a few address bits into the register file. These three groups of signals will form fields within the instruction. Each group will be kept together, and their detailed meaning arises out of the design for that unit (ALU etc) but the groups may be in any order, up until you design the instruction decoder. (the x86 is old enough that you can detect some of this if you look in the right place - it wasn't a totally new design, but drew from the older 8080)

Later ISAs may be "cleaned up" and made more regular and simpler to use, with hardware to translate between them and the actual hardware-level control signals, sometimes via "microcode". These are called "CISC" or "Complex Instruction Set Coding". The x86 "Rep" instruction prefix is a simple example of this - it causes the following instruction to be repeated a number of times, to save having to write a FOR loop.

Later still (in the 1980s) came a movement back to a simpler style of direct encoding (RISC - Reduced Instruction Set Coding) which you can see in the ARM processors. This was driven by the small size of ASICs at the time, and the desire to put 32-bit CPUs on them, hence there was no spare capacity for complex instruction set decoders, to get the complete CPU down to about 20,000 gates. (There was also a temporary performance boost, because people hadn't developed techniques to make CISC decoders fast yet - that came about 1995 with the Pentium Pro)

And nowadays it doesn't matter - CPUs read several instructions at once, and devote millions of transistors to decoding them, re-ordering them, and executing as many as possible at once, to speed up programs that may have been written for the oldest style of ISA.

If you group similar instructions together, patterns will emerge. This is very obvious in ARM, where the ISA manual actually shows you which bit of an instruction word correspond to function, register choice, etc. But it can also be inferred for X86.

Ultimately the "function" part of opcodes go into some binary-to-onehot decoder that actually activates a particular function or sequence of pipelined operations. They are not usually related to the contents of any state machine, unless we're considering variable-length instructions which require a state machine to decode.

Someone at some point sat down and defined them.

A good ISA will make the decoder as simple as possible.

For example with an ALU instruction you could let some bits of the opcode be sent directly into the control lines of the ALU.

Typically, you would split your ISA into functional groups. It makes sense (either for logic optimisation or just being tidy) that complimentary pairs are differentiated by a single bit change (load vs store), and that you have some hierarchy of bits which affect the decode decision tree.

At the end of the day, an arbitrary allocation of bits for the function block (as opposed to placing the 'data' fields in the instruction will only have a small impact on your overall design efficiency - but you have plenty of choices about how to 'optimise' your ISA encoding depending on what you feel is an important parameter.

Instruction encoding is an ugly compromise between.

Making the decode simple, for this you want a simple set of fields each of which can be decoded seperately and routed to a seperate part of the execution engine.

Packing as much functionality as possible into a limited size of instruction word. This leads to things like special constant formats that can encode a variety of common numbers.

Forward and backwards compatibility. If you assign functionality to every possible opcode you give yourself no room to expand the architecture later. If you are adding to an existing architecture you have to slot your new instructions into the spare opcodes.

Randy Hyde's excellent (if somewhat dated) The Art of Assembly goes into the x86 instruction set in some detail in chapter 3.3.4 The Control Unit and Instruction Sets and following.

Programs in early (pre-Von Neumann) computer systems were often "hard-wired" into the circuitry. That is, the computer's wiring determined what problem the computer would solve. One had to rewire the circuitry in order to change the program. A very difficult task. The next advance in computer design was the programmable computer system, one that allowed a computer programmer to easily "rewire" the computer system using a sequence of sockets and plug wires. A computer program consisted of a set of rows of holes (sockets), each row representing one operation during the execution of the program. The programmer could select one of several instructions by plugging a wire into the particular socket for the desired instruction.

He then demonstrates quite catchy and at length how the first couple of plugs stand for the instruction, the next plugs encode source and destination. Of course, today nobody "plugs" anymore, but for the really old ISA's, the bits in the opcode basically do the same job as the plugs before.

Not the answer you're looking for? Browse other questions tagged binary instruction-set or ask your own question.

1
Z80 Binary Front Panel Design
0
How to convert ( 11011.0101 ) from binary to decimal?
0
Mapping Opcodes to Binary
1
Subtracting a larger binary number from a smaller binary number
0
when and how is the machine language (binary stream) mapped to an existing instruction?
0
Where in the instruction pipeline is machine code to microcode translation?