What does “shift keying” mean in the context of digital modulation?

English is not my native language and I do not understand why the words "shift keying" were used to describe some types of digital modulation.

My question is one about terminology more than about electronics. I understand what Amplitude Shift Keying (ASK) is now. What I do not understand is what is the meaning of the words "shift keying" and why this type of modulation was not named simply "amplitude modulation"?

In none of the Wikipedia articles that contain the phrase 'shift keying' and from the context I do not understand why were those words used. What I understand is 'moving a key' I do not know how is this related to modulation or to electronics in general.

Another answer has explained why the word keying is used --- it dates to the days when modulation was controlled by a human operator using a telegraph key.

The phase shift (or amplitude shift or whatever) is because something is changing (shifting) when keyed.

If the system were manually operated, you could say that each time the operator pressed the key, the phase is shifted.

It's called "shift keying" because during the course of transmission of digital data the values of the quantity that is used for coding the data (e.g. amplitude, frequency, phase) shift between two (or more) discrete switching (=keying) values.

"Keying" is synonymous with modulation, in the context of referencing how a signal is constructed.

Think of it as saying a signal is 'Phase Shift, Keyed', or that the phase of the signal is modified.

I hope that helps with the language/translation.

For keying the carrier property used is changed between discrete values only, e.g. for 2 values this can be on/off for amplitude, or 0° and 180° for phase. The change itself is named the shift, it can be an amplitude shift, a frequency shift, etc.

I'm not going into the details, but a continuous wave is not the only type of carrier which can be used. Sometimes, for digital communication, a train of pulses is used. We talked about pulse keying, e.g. pulse width keying, pulse position keying, etc.

Keying just comes for Morse telegraphy where a key was used to switch the carrier on/off. Shift denotes the sudden change between two states.

Communication is a domain which has experienced and still experiences spectacular changes thanks to e.g. DSP and software-defined radio (SDR). The consequence is the new wording constantly entering in use and the difficulty to match it with what was up to date just a few years ago.

Signal (the information to be transmitted):

Carrier (the electromagnetic wave used to transmit the information signal):

A wave is continuously generated, i.e. a sinusoidal continuous wave (CW).
The signal will change some property of the carrier: Its amplitude, its frequency or it's phase. The term continuous wave was adopted to contrast with the first radio technology it replaced: Damped waves created by sparks.

The principle of a transmission by carrier, e.g. optical or radio, is to adjust one or more carrier properties in correlation with the signal, so that the signal can be sent on a long distance using the carrier altered by the signal, and recovered by the receiver from the altered carrier.

Modulation is used to transmit an analog signal onto an analog/continuous carrier. The legacy (analog) radio and TV broadcast fall in this category.

Modulation is mostly used for analog signals, but also for digital signals (see continuous phase modulation further down). The key element is the carrier property can take all technically permitted values.

Keying is used to transmit a digital signal onto an analog/continuous carrier. Morse radiotelegraphy falls into this category as well as GPS and HDTV (and likely everything modern which comes to your mind).

In contrast to modulation, a keyed carrier property takes only discrete values.

The most simple digital signal has only two values (0/1 or on/off). Marconi radiotelegraphy using Morse code was dealing with digital signals without knowing. In that case the modulation was done manually using a switch (key) to turn on/off a continuous wave (CW) carrier. 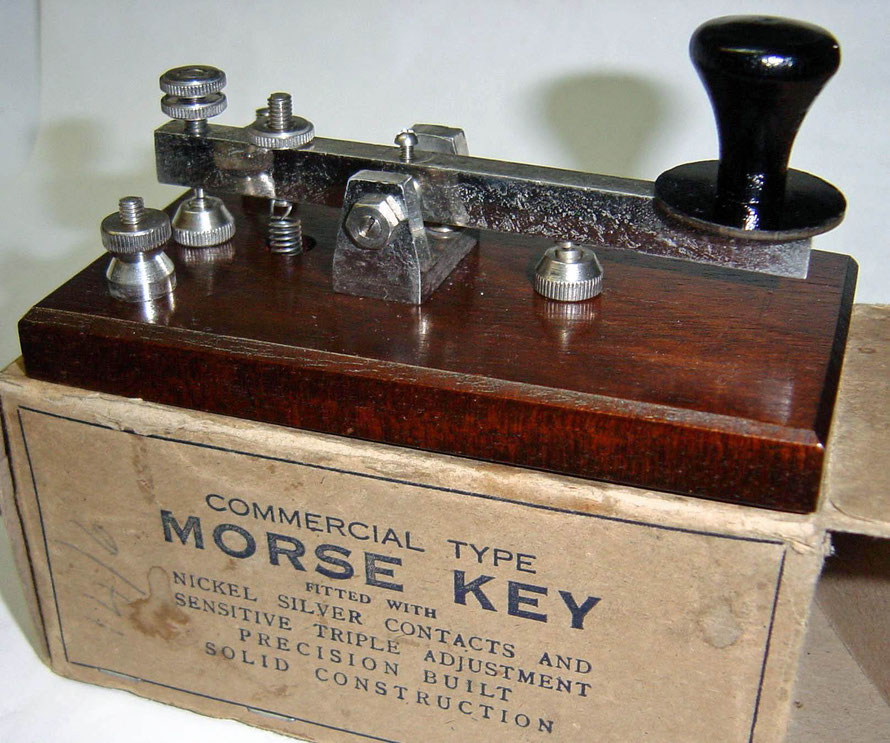 This example of radiotelegraphy is representative of the difficulty to talk about signal transmission:

In the engineering field, keying is used to refer to continuous wave modulation by signals with discrete values, whatever the code used (telegraphy is technically binary amplitude shift keying with Morse code).

For the simple case a binary amplitude shift keying, the term on-off keying is also used, as the amplitude can only be maximal or null.

Sometimes the carrier change between successive signal values is not abrupt, but progressive, as in the continuous phase modulation (CPM) where the carrier adjustment and the digital signal are not exactly coherent. Note it's a modulation, not a keying.

In reductionism in philosophy and science one attempts to reduce to the simplest "atom" of an idea. I think these ideas may have affected nomenclature for electronics. It may be more philosophical that the word keying was chosen. It is true a Morse code key can be considered a simple switch- on off- 1 or 0. A key and Morse code transmitter are very simple. Simpler than a receiver. It was considered the simplest modulation technique at one time, requiring operator skill and FCC license.

I suppose the word shift is more questionable, but it seems to be common jargon now.

Not the answer you're looking for? Browse other questions tagged signal signal-processing modulation digital-communications amplitude or ask your own question.

0
Amplitude and phase spectrum in MATLAB
9
Why does more bandwidth mean higher bit rate in digital transmission?
1
How does widening the frequency band allows us to make faster pulses in a radio link?
0
Question about digital modulation
0
Minimum Shift Keying
0
What does division order mean in Rayleigh Fading?
0
Equivalent baseband communication channel
1
Frequency Key Shift technique to superpose the digital communication on top of 4–20 mA signals