Below is part of a BJT current mirror: 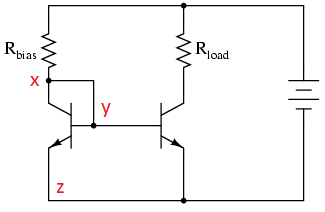 I marked the specific nodes of the reference transistor on the left as x, y and z.

Many texts claim the following(I tried to summarize):

Since the collector of this transistor is tied to the base of it(x is directly wired to y), so we can say that from collector to the emitter we basically have one diode drop. The transistor is operating as a diode.

What they say "one diode drop" must be the potential difference between x and z.(?)

So if we write the potential difference between x and z:

I guess they are assuming Vxy = 0, since there is no voltage drop across a single wire right? Is that the reason they conclude Vxz is "one diode drop"?

But if they assume this and if it correct, it leads me to a confusion. Let's focus on this section of transistor:

Bu we also know that current flows both from x to b; and also from x to y then they both flow all the way down to z.

So at the beginning accepting the transistor in a diode type of connection led me to this paradoxical confusion.

Where am I making a logical mistake here?

I'm still trying to understand but the user "horta" could express my confusion the best as follows:

"Since we treat wires as superconductors in schematics, there's current flow from X to Y because the resistance is 0. You can treat the internal collector-base junction as having some resistance and therefore 0 current. Ohms law states that V=IR. Without voltage how can you have current? If R=0 because 0/0 is undefined."

2-) And everybody agreed Vxy = 0 because the wire doesn't drop voltage from x to y.

3-) But since there is resistance across x and b, Vxb is actually non-zero which means Vxb = non-zero.

4-) Now go back to the first assumption and see zero = non-zero.

Your question is probably common enough, so I think you are asking a question worth a moment's time to discuss. One approach I use when I face a mental struggle trying to understand something like this is to slow down time and see where that takes me.

Let's look at the schematic in a different way: 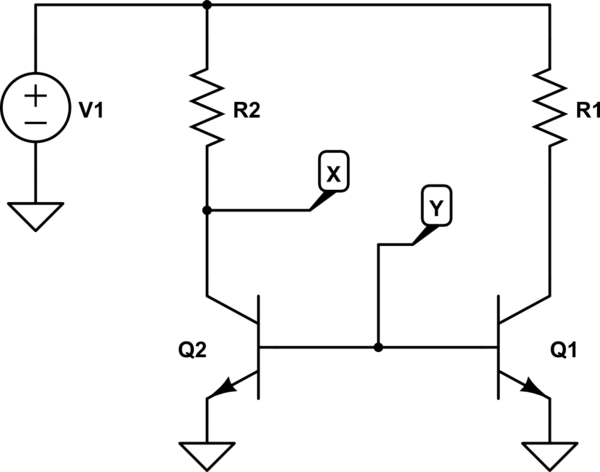 What I've done is break the connection that you included on your schematic, between the collector and base of \$Q_2\$. We will want to say that \$V_X=V_Y\$ all the time because in your schematic there is a wire there. But I've broken that wire. This allows us to separate things long enough to talk about it.

Now, let's start time flowing, but very slowly, as we mentally permit the voltage at \$V_X\$ to equilibrate with the voltage at \$V_Y\$. As \$V_Y\$ rises just slightly towards \$V_X\$, \$Q_2\$ begins to turn on. As it turns on, a small collector current starts up and therefore a small voltage drop across \$R_2\$ begins, as well, lowering \$V_X\$. So you can see that \$V_X\$ is lowering as \$V_Y\$ is rising. (We're keeping them disconnected but allowing \$V_Y\$ to rise independently, remember?) It's a good sign that they are approaching each other.

Now, look back over this. We've reached a point where \$V_X=V_Y\$ and there's no quandary or confusion. If we carefully and slowly increase the voltage at \$V_Y\$, then there will quickly come a moment when \$V_X=V_Y\$ and right exactly that this moment we could just run a wire from \$X\$ to \$Y\$ and nothing new would happen when we did that. So we just short the two points together and are at the exact same place as before.

We've brought the two points together slowly. This is similar to what happens when you place a wire there and power up the circuit. It just all happens very fast in real life. And it is a lot easier to focus on the final equilibrium state and talk about behavior relative to that, than to digress over some odd nanosecond that doesn't really matter for most purposes.

Sure, there will be a slight adjustment due to the diversion of current supplying the two bases. And there will be another adjustment for the Early Effect that applies to the difference between the \$V_{CE}\$ of the two BJTs. And if these are unmatched parts, there will be still more adjustments for the variations between them, as well. And the load (\$R_1\$) matters, too, as it can drive \$Q_1\$ into saturation if the mirrored current is high enough. But it still can be useful and the idea is often found in ICs, at least, where there is some closer control available.

Assuming your schematic (not mine, unless you short \$X\$ and \$Y\$ together), a simplified expression for the shared base node (let's just call the voltage there \$V\$) is:

Unless you are familiar with the use of the Lambert-W (product-log) function, you won't be able to provide a closed solution for that equation. (If you are interested in what the LambertW function is [how it is defined] and in seeing a fully worked example on how to apply it to solving problems like these, then see my answer here: Differential and Multistage Amplifiers(BJT).)

Just because the base and collector of the transistor are at the same potential does not stop it operating as a transistor.

Because of recombination in the base region there will be some current wasted on the base current. With a high beta transistor that will be small.

It's called a diode connected transistor because you're literally shorting out base to collector turning it into forward biased PN junction. In your diagram, in a simplified model, node B can be completely ignored because you have a forward biased PN juncton, i.e. a diode. Since you have a diode, you have to follow the exponential diode equation which results usually in ~0.7V (depending upon semiconductor materials).

From your diagram and comments you mention: Vcb=Vxb=Vxy=0 Which is completely fine. Since we treat wires as superconductors in schematics, there's current flow from X to Y because the resistance is 0. You can treat the internal collector-base junction as having some resistance and therefore 0 current. Ohms law states that V=IR. Without voltage how can you have current? If R=0 because 0/0 is undefined.

If you want to look at a more accurate picture of what is going on, then some current will flow through the diode which turns on the transistor and allows a much larger current flow through collector to base. Using a transistor action equation you could figure out how much current flows through the collector vs the current through the base. At virtually any current though, the voltage will vary very little because a transistor's current varies according to Vbe exponentially just like a diode does.

Not the answer you're looking for? Browse other questions tagged bjt current-mirror or ask your own question.

2
Current source improves linearity on collector BJT
8
A question about Vce of an NPN BJT in saturation region
11
Why does the current still flow through the collector eventhough the transistor circuit has no Vcc
0
BJT NPN current flow
2
High-Swing Cascode Current Mirror
4
How this current mirror act as a replacement to resistor Rc?
3
bjt diode analogy confusion
0
Question about NPN BJT transistor
0
Why use diode connected BJT (and not just connect two BJT back-to-back) for current mirror circuit?