I'm currently doing the practice problems for CMOS VLSI Design 4th Edition. Question 1.6 says to use a combination of CMOS gates to generate the following functions (solution attached below function given from book answers):

My question is regarding the outputs.

For the first function (buffer) what is the point of using two inverters? Why can't I just draw a buffer? And why does the second inverter need to be active low?

For the second function, same thing, why does the output need to have an active low inverter? why can it just contain an OR gate at the output instead of a NOR and an inverter?

My best guess is that it's used to produce 'strong' outputs. But that explanation doesn't fully help with my understanding.

If the only criteria is that a combination of gates be used then there could be an infinite number of 'correct' answers. However,

what is the point of using two inverters? Why can't I just draw a buffer?

And why does the second inverter need to be active low?

The negation would be equally valid on the output, but having it on the input shows that the signal is 'active low' at this point.

For the second function, same thing, why does the output need to have an active low inverter? why can it just contain an OR gate at the output instead of a NOR and an inverter?

Same thing. A CMOS OR gate is already a combination of a NOR gate and an inverter. 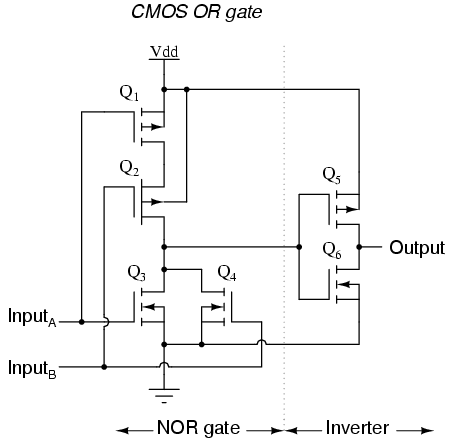 For the first question, you can't just draw a buffer because you are being asked how a buffer is implemented. Fundamentally, a buffer is two inverters back-to-back, as shown here. 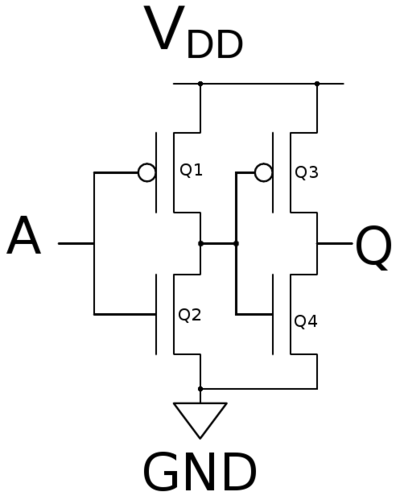 The second question is similar. You can't simple use an or gate because it is not a fundamental gate - it is constructed from a nor gate with an inverter follower. Like so: 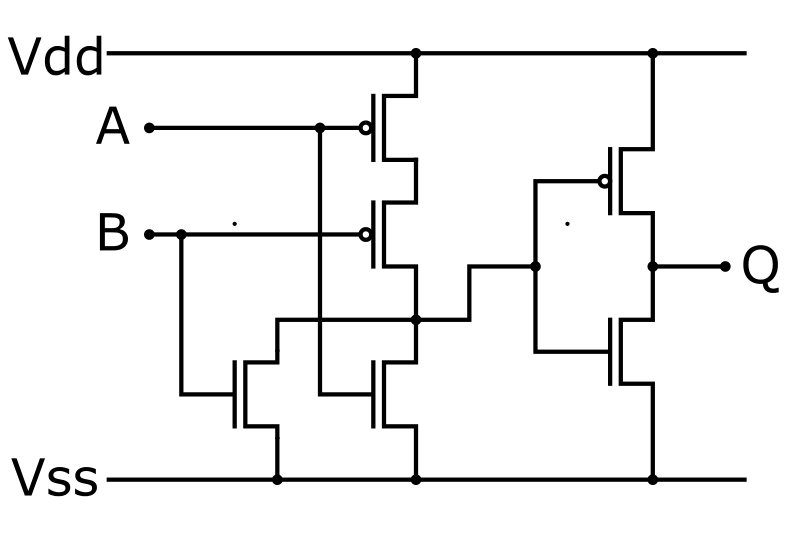 Why not do the functions using NAND gates? There's a neat XOR gate circuit:

This gets rid of the confusion about active-low inputs. I also like that it is a single-package implementation. 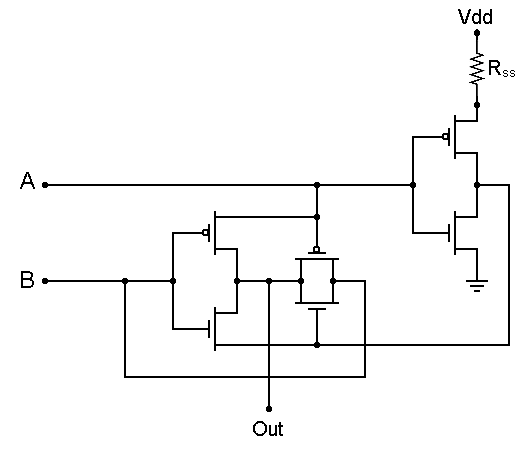 The basic gates (AND, OR, NAND, NOR) have their deMorgan's equivalent.

By using positive-input or negative-input gates, an author can identify the active state, which helps trouble-shooting. Without having to check anything else, a trouble-shooter could identify a possible problem, just by looking at the symbol used.

It is not particularity useful in your case, but it was when you had levels of gates in discrete design. For chip selects, it clearly identified the active state (low or high).

In the following example, the OR gate is shown as a Negative-NAND, because Chip Select and Output Enable both have to be low to activate output buffers. If the device was supposed to be active and no 0 was seen on input, problem found. 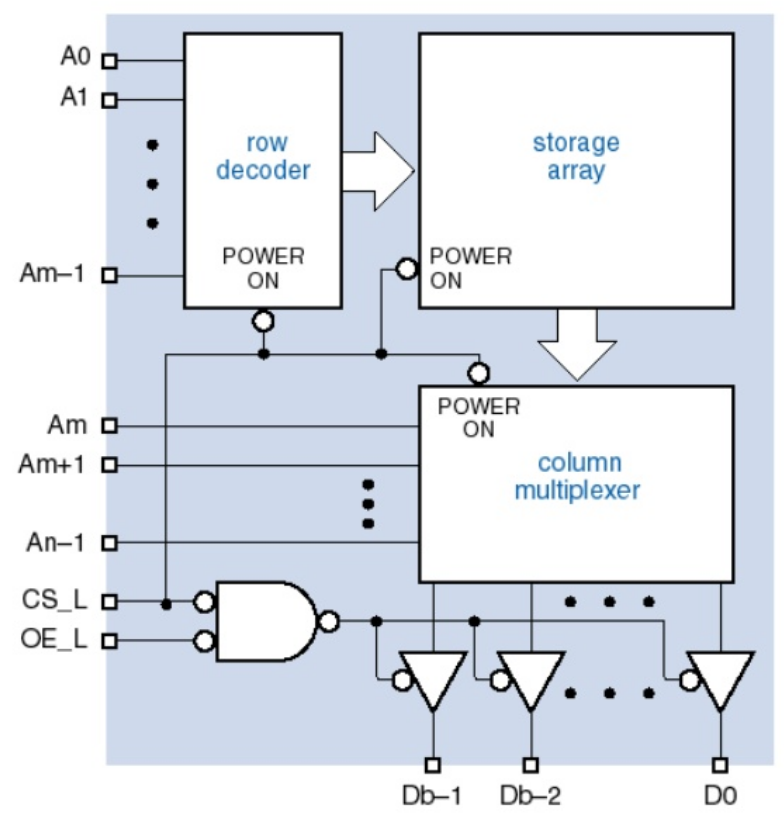 The use of Negative-Logic makes a SR NAND flip-flop so much easier to understand. Any input 0, means corresponding output is 1. It even looks similar to a SR NOR flip-flop. 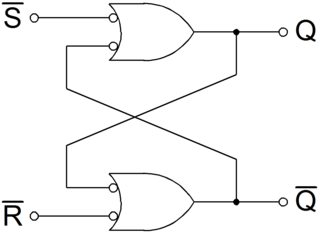 It was also more prevalent with TTL circuits, since TTL could sink more current (low) than source, which effected the fanout or number of devices a TTL output could drive.

You do not see it very often these days, but I do smile when I do.

This is not overly meaningful, but Y = A. The inversions cancel each other out, so are irrelevant. The author is highlighting this.

Not the answer you're looking for? Browse other questions tagged inverter cmos vlsi or ask your own question.

3
Convert fan-in-2 fan-out-3 NAND gates to FO4
4
Implementing logic gates in CMOS
1
Is inverting the output of a CMOS network a bad practice?
0
cmos output buffer currents
6
What does the value “Z” in the function table for this inverter stand for?
2
Question about a CMOS operational amplifier
4
Why does the UPS mode of an inverter have faster switching times?
0
Pull-up/ pull-down resistors in CMOS gates
0
Confused with the output resistance of the CMOS inverter