I found LTspice model for LM317 in a very trustable recommended source, downloaded and simulated the following circuit: 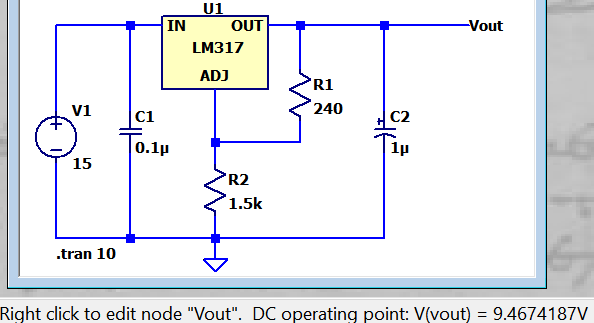 But online calculators calculates for the same resistors different output voltages than LTspice. Here some examples:

If someone encountered this or eligible to verify whether the LTspice model is correct, why is there big difference? Is this LTspice model reliable?

The 9.06V (nominal) calculator results from ignoring the effect of the 50uA nominal Iadj current.

There are a number of LM317 models installed in LTSpice (at least in mine). The first one I tried (unknown source) yielded an output voltage of 9.125V, close enough. The second, a MOT model yielded 9.636V, which is a bit out of spec. The MOT-2 model oscillates (lol) with 100n or 1uF - supposedly not needed for stability- and yields 9.161V with 10uF. The TI and TI-2 models both give 9.467V- close to being out of spec.

The 240 ohm resistor is really putting load that is less than it should be on the output (though you'll see it a lot), so might want to try again with a significant load on the regulator- nope with a 2K load in addition the voltage on MOT is 9.635V, pretty much as you'd expect with it being in regulation sans load. TI model similarly drops about 1 mV with the extra 5mA load.

The results don't really engender a lot of confidence in the results being very accurate at DC.

This is great enough to make the 100uA max adjust terminal current a minor consideration, which I shall ignore.

These currents will develop 1.5k * 5 ma = 7.5V min and 8.1V max across R2, which when added to the reference voltage across R1 makes the output anywhere from 8.7V to 9.4V depending on what unit you happen to have.

This analysis also ignores the tolerances of the resistor network which is typically going to be much tighter then the reference in these old and unimpressive (but cheap) regulators.

you may correct this and other simulations, by only changing 2 parameters in the subcircuit 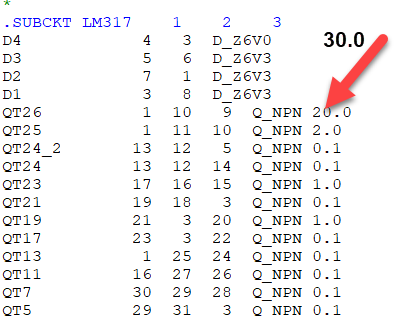 Not the answer you're looking for? Browse other questions tagged ltspice lm317 or ask your own question.

4
Simple LM317 variable voltage supply, does it limit current too?
2
Why are the output voltages way too high on this stacked LM317 circuit?
3
How to improve load transient response of an LM317 voltage-regulator powering an audio amplifier?
2
Can I have two (or more) different symbols for the same LTspice schematic? How?
0
Node with two different voltages at the same time - Two branches (voltage source+resistor) in parallel - LTspice
1
Plot voltage for different resistor values in LTSpice
3
Creating a temperature-dependent solar cell in LTSpice (using varistors)
8
What are the calculations to do in practice to estimate beforehand the noise seen on the output of this op amp circuit?