In the two images presented below, I need to solve for the 'Open Circuit Voltage' and 'Short Circuit Current' in loop 1 at the first LED String (Consisting of 10 LEDs in series) circled in red.

I have a base understanding of how to go about solving this, but it hasn't provided a solution thus far. I was hoping someone could explain the steps on how to solve these two problems. My ultimate goal is to the create a load line so that I can compare it to another LED light and find an operating point. If someone could help that would be much appreciated. 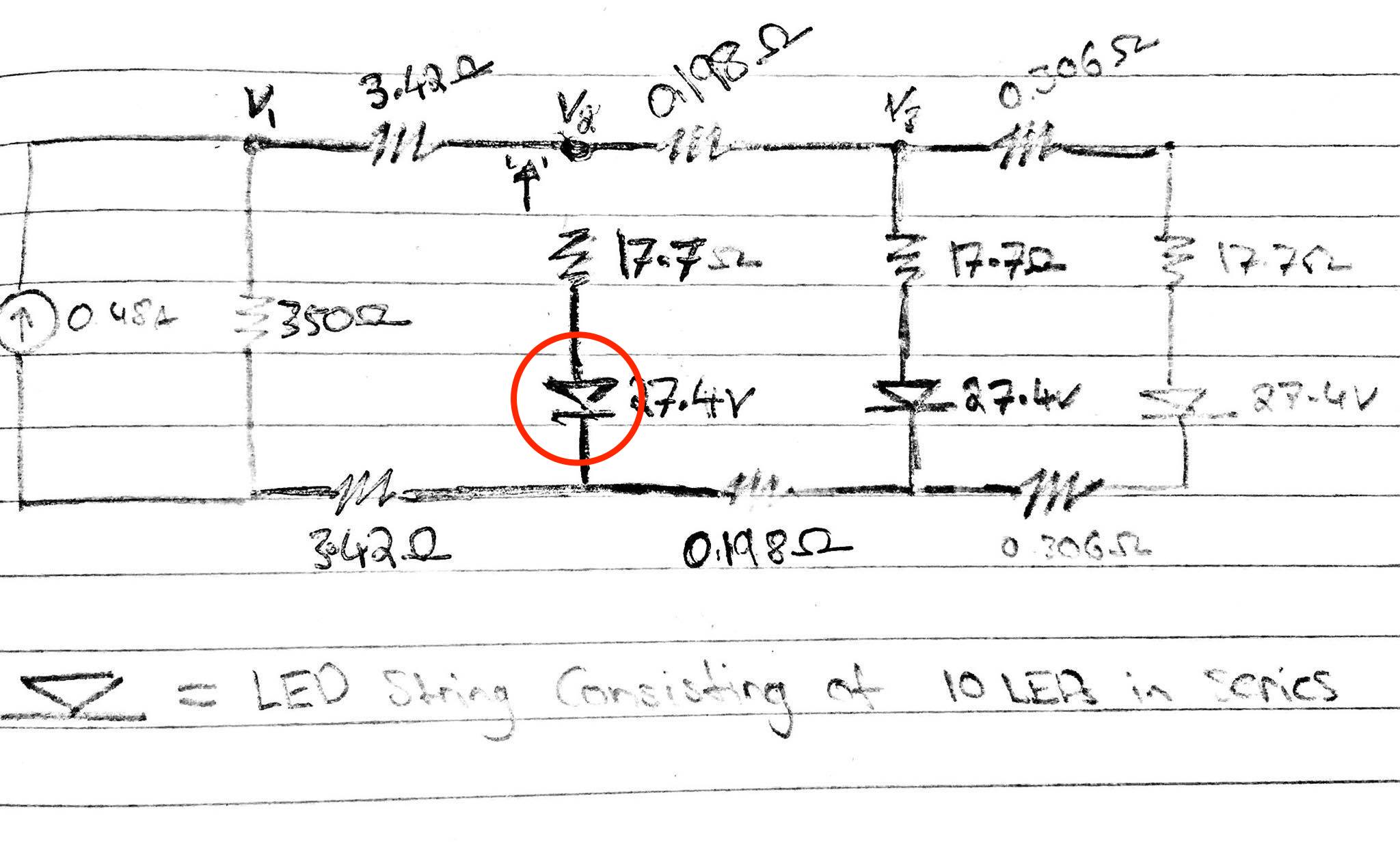 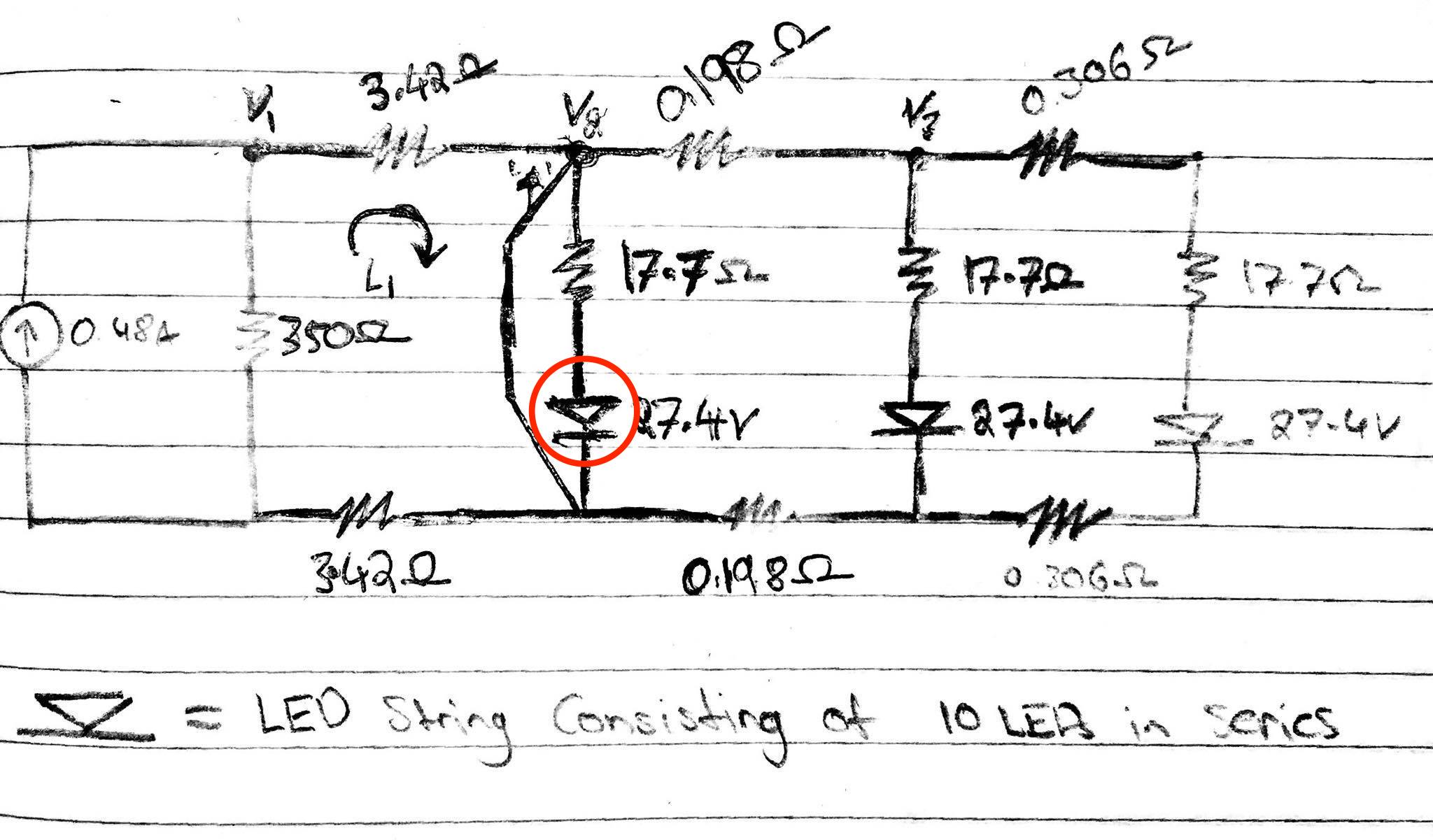 Okay. With the inclusion of your own results that closely mirrors my "mental hand-waving" result, I'll give this a shot. First, though, by getting a precise theoretical result for the short-circuit current, based upon the comment I made.

First, we need a proper schematic. I wish you'd learn to use the schematic editor that is included with this site. We've all had to spend the time learning it, so we know exactly how little excuse there can be for not using it. Your hand-drawn images do not add any value I can think of, that isn't already available in the editor. So no excuses (for you or me.)

Now everything is numbered (as it should be) to save wasted breath and writing. I've used \$V_n\$ to number each node and I've added a ground symbol so that we know what we are talking about when we specify a voltage, without also saying what it is relative to. These things are important and you should get in the practice when asking questions like this. It's your question, after all, and you should add value to it yourself if you want others to take a moment because it saves them time.

Sorry about the lecture. But it has to be said.

Also note that, as already discussed in comments you received in a different question you asked, it is entirely possible to mentally combine \$R_5\$ and \$R_6\$ as a new resistor value because they are both in a series circuit and therefore the current must be the same in both of them (everything to the right of them is mentally a single "circuit element" that is in series with those two resistors.)

But I intend on leaving things exactly as you have them.

This is formed quite simply by mentally treating resistors as conductances and using the ratio of their conductances, plus 1, to determine how the current splits between them. Just as a note, the same idea also computes the current in \$R_4\$ in a very symmetrical way:

Just by way of i-dotting and t-crossing, here's the schematic we've been talking about:

Let's start with the place you and I are discussing now:

There are lots of different techniques to use in solving something like this. The following approach is not the one I'd use, since I'm comfortable with nodal analysis and would greatly prefer it here. But I'm just going to follow a more basic approach and hope it communicates the way you want. (You haven't specified a specific approach you want followed, so I'm free to assume anything I want to.)

(In the above, the new voltage nodes are no longer the exact same ones as in the original schematic. So I will say \$V_2^{'}\$ when referring to this new node. Just to make sure you understand the distinction.)

But since the voltages across the LED strings are assumed to be exactly the same, this circuit can be further simplified:

Here you can now easily see that this is nothing more than a series chain of resistors proceeding from one voltage supply to another. The current will be:

From this, we can now easily compute:

And so that is your answer to the other part of your question.

I know you say you want a load line. And now you can make one. But I also have no real clue why you care about that particular load line. So I guess it is now up to you where you go from there.

In summary, I've provided one of many different ways to achieve your goal. I've tried to keep this to a simplified approach that uses your assumption that the voltage across the LED strings is fixed.

Not the answer you're looking for? Browse other questions tagged led current current-measurement short-circuit or ask your own question.

1
Is it possible to make a short-circuit detector for a battery power supply?
0
Best resistance for RED/BLUE 3 lead LED
0
LED Voltage Drop Confusion
3
Discrete LED Driver Topology
1
Will relays work to switch between two circuits which power same LED string?
3
Circuit to detect presence or absense of current
1
Short Circuit Detection in wire
0
Ammeter with 2 voltage sources without superposition
10
Understanding why not to use a resistor for multiple LEDs
0
LED open and short detection