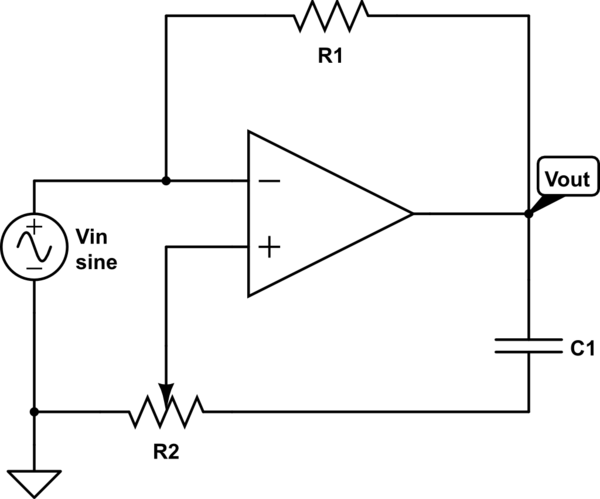 I'm having a difficult time analyzing the circuit shown and would appreciate some help. I'm just curious in order to get better at op amp circuit analysis. This circuit and others like it come from the following source:

I'm getting lost on the way the author of that paper is determining the equations for Vout, and having a feedback path to both terminals of the op amp is really throwing me off! Thanks for any suggestions.

The circuit is not correct: you can't apply a voltage on that node.

Instead, you shold apply a current, let's say Iin, and then measure the voltage of the inverting input, and after that, you can calculate the Zin as Vinv/Iin (Vinv = inverting input voltage). Iin is the input current, with passive convention sign (positive if it goes rightward).

If you look at your paper, the second equation tells exactly that (With different notations). The first equation says that Iin is $$Iin=\frac{Vinv-Vout}{R1}.$$ Then the paper assumes that negative feedback works, therefore the voltage of the inverting input is equal to the voltage of the non inverting input. As a result, Vinv (which is the same as Vninv) is the classic impedance divider formula (the paper assumes a zero input current on the OA).

Substituting Vinv in Iin and calculating the input impedance (Vinv/Iin), one should get exactly equation 6 on your paper.

EDIT: It turns out it doesn't! Even after some possible approximations. A result which is similar to eq. 6 (i.e. a negative resistance + negative capacitance) is achieved by swapping the inverting input with the non-inverting input.

Under the assumptions (not stated in the paper, though) of k<<1, and "high enough" frequency, the first denominator becomes 1, and the term in the parethesis becomes $$-1+\frac{1}{j\omega C \cdot R2}$$.

To determine the transfer function of this circuit, I will apply the Fast Analytical Circuits Techniques or FACTs described here. The principle behind the FACTs is to determine the time constants of the circuits in two different configurations: the stimulus is reduced to 0 (0 A or 0 V) and the response is nulled. Then, assembling these time constants leads you to the correct low-entropy transfer function. Low-entropy means you can see what the plateau (or dc or infinite values) is and where the poles are zeros are.

Let's start with the transfer function linking the response \$V_{out}\$ to the stimulus \$V_{in}\$. The circuit is shown below and I have purposely replaced the potentiometer by two resistances. 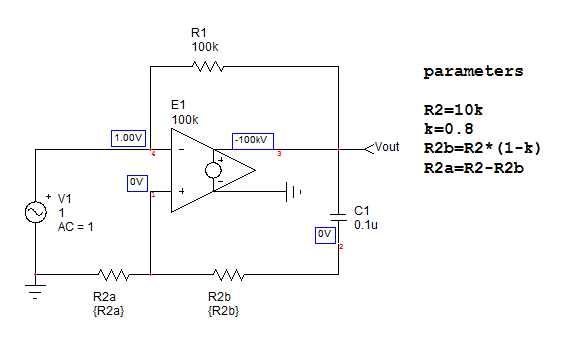 In my calculations, I always first consider a finite op amp open-loop gain \$A_{OL}\$ which I later consider infinite for the final expression. This lets me simulate and test various gain configurations and make sure my formulas exactly match dc simulation results. From the above sketch, the dc gain is immediate and equals: \$H_0=-A_{OL}\$. The next step consists of determining the resistance "seen" from the capacitor's terminals when the excitation is reduced to 0 V: replace \$V_{in}\$ by a short circuit. The schematic is below: 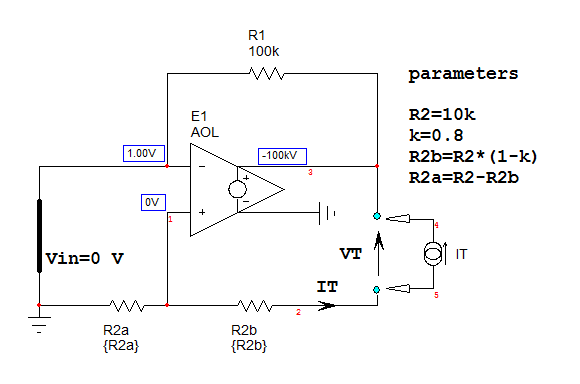 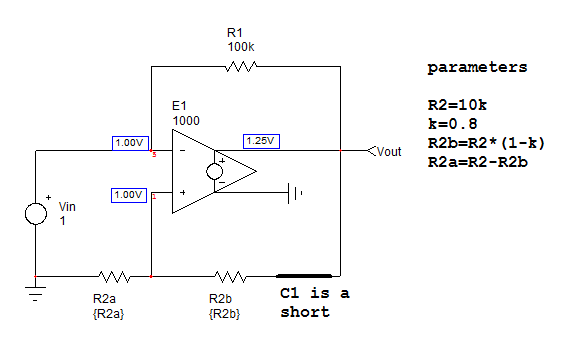 Mathcad can plot this transfer function as shown below:

For the input impedance, this is not more complicated. The stimulus becomes a test generator \$I_T\$ developing a response \$V_T\$ across its terminals. You first determine the dc input resistance \$R_0\$ and then, the zero when the current source is replaced by a short circuit (it is the degenerate case of a current source whose terminals's voltage is 0 V - the response is nulled). The circuit is shown below: 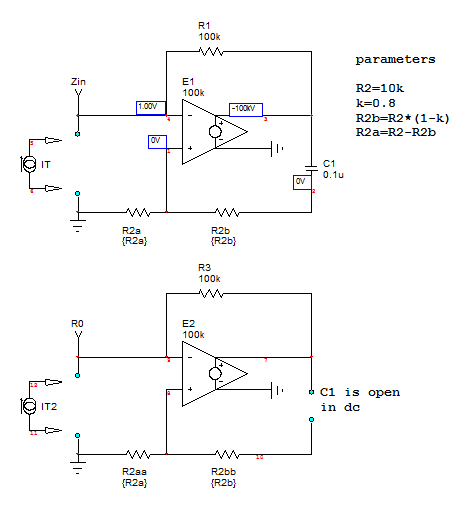 The dc resistance \$R_0\$ is obtained by opening capacitor \$C_1\$. The calculation is easy and leads you to \$R_0=\frac{R_1}{1+A_{OL}}\$. The pole is calculated by setting the excitation to 0 A: open-circuit the current source and calculate the resistance "seen" from \$C_1\$'s terminals in this mode. You should find \$\tau_2=C_1(R_{2b}+\frac{R_2a}{1+A_{OL}}\approx C_1R_2b\$. The numerator is actually the same as our previously-defined denominator as the time constant is obtained when the response across the current source is nulled (replace it by a short circuit) and this configuration is similar to having \$V_{in}=0\$. Re-arrange, simplify and re-organize to find the following expression for \$V_{in}(s)\$:

If you plot this expression, you can see how the phase nicely hits -180° and confirms the negative input impedance: 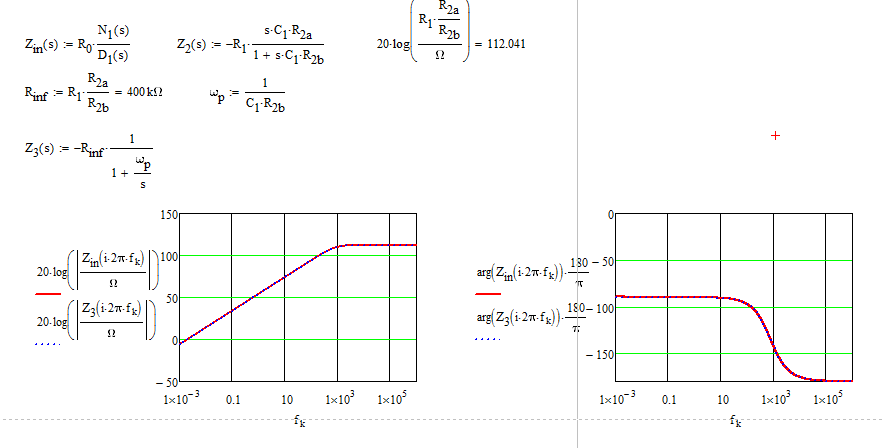 By changing the potentiometer value, you change the term \$R_{\infty}\$. The below SPICE simulation perfectly matches the calculations: 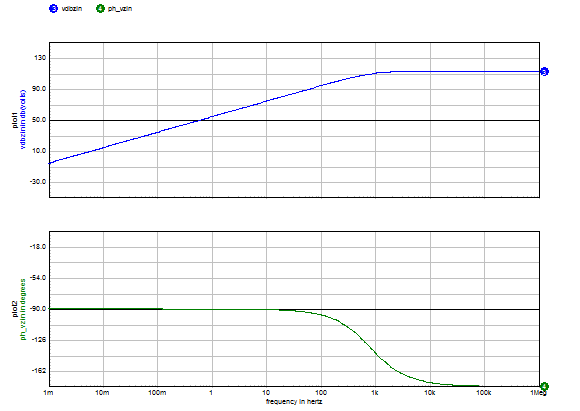 However, unlike what the text says for their Figure 4 picture, the circuit seems to generate a circuit combining a negative inductance in // with a negative resistance. With the simulation values, I obtain a similar input impedance plot (magnitude and phase) when I parallel a -80-H inductance with a -400-k\$\Omega\$ resistance.

Not the answer you're looking for? Browse other questions tagged operational-amplifier resistance impedance negative or ask your own question.