Substituting multiple resistors with one [duplicate]

Hi am a beginner in Electronics and I have been working with a LED project. I have a requirement where i need to connect 6 LED's in a way shown in the below diagram. Forward voltage of these LED's are 3v and current consumption around 20mA. 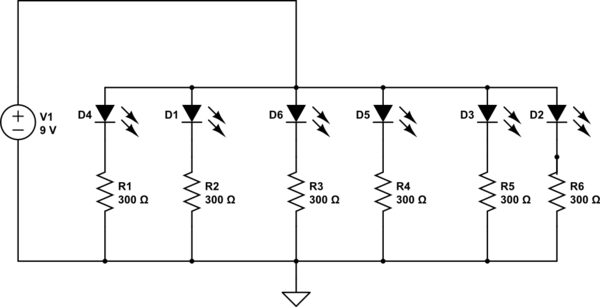 But I felt the above schematic is so bulk due to the presence of resistors, So I am thinking to replace the above one with something like this below.

simulate this circuit Am i doing it right in simplifying the circuit? Kindly advice.

Yes you are able to do what you propose. There will be current differences between the LEDs, but it's unlikely that you will be able to see the difference. No LED will hog all the current, no LED will go into thermal runaway, and no LED will 'pop' and cause catastrophic failure. You can do simple tests to ensure that your LEDs are within a reasonable Vf range.

One comment suggested this previous answer, but unfortunately the answer selected as correct is wrong. Look at the answer from Stevenvh .....that is correct. From this answer you can see that the LEDs need to be the same (part number at least) and with this caveat the differences between the LEDs will result in current/power differences of only a few percent when many are paralleled.

There are many millions of LED Torches that use this technique and have up to 20-25 LEDs in them with a single series resistor. They don't blow up, they don't thermally runaway.

One note for you though is that you don't need to use a 9 V battery. In this configuration you are wasting battery energy. If your LEDs were 3 V Vf precisely (which I bet they are not), then you are dissipating about 700 mW in the resistor (one or many it's the same) and only 360 mW in the LEDs.

Note: It would be much better to use 3 * 1.5 V batteries. With this configuration and a series resistor of 12.5 Ohms (to give the 120 mA total current) you would then dissipate only 180 mW in the series resistor.

Do you need bin'd components? You can pay extra for LEDs that are sorted to provide a lower variance (in Vf, color and light output), but for most DIY'ers this represents a potentially expensive option. However you can simply do a single point check for each LED you have, using a resistor to limit the current. If you measure the Vf at your target working current (say 20 mA) you can sort for differences in the LEDs Vf. I normally buy cheap LED on Ebay (by the 100) and find only about 50-100 mV maximum variation. It's easy to select 5-10 LEDs from the batch within just a few mV of each other at any given operating current. You could for example sort 100 LEDs into say 20-50 mV groups and chose to select a series resistor value for each group if you were concerned (still much less than a resister per LED).

For example, here is a CREE datasheet for a White LED. Notice in the bin'ing that the majority of selection is done for color, but there are Vf bins:

This clearly shows that you would have serious trouble with a parallel configuration if you had a range of Vf with some at 3.2 V and some at 4.4 V. However, buying all from one bin gets you to only 200 mV Vf range.

Reference to the datasheet again shows the typical forward current related to Vf: 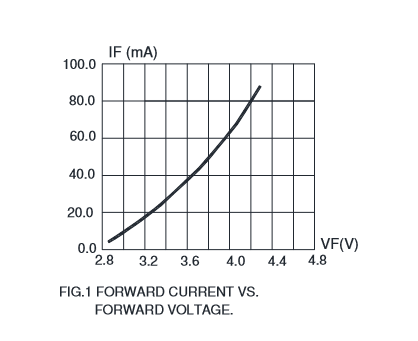 This is a typical curve ....here you would consider a single LED would be like this, and the datasheet shows VF @ 50 mA for the bins. So on this typical curve the LED Vf is about 3.8 V. If you had another LED from another bin you'd have a separate curve centered around 50 mA. Here I've fudged the graphic to show the maximum variation of bins: 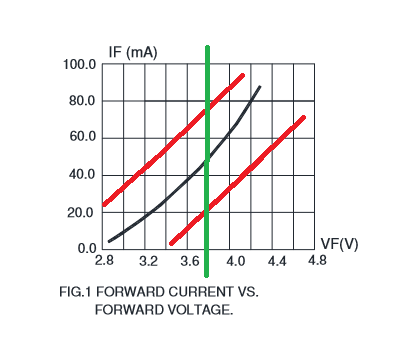 Notice that if you put three LEDs with Vf bin values 3.2, 3.8 and 4.4 in parallel you'd have current values of approximately 75, 50 and 20 mA respectively in the LEDs. Variation for sure, but unlikely to pop or have thermal runaway become a problem.

So it's definitely worthwhile to ensure your LEDs Vf are within say 100 mV of each other to ensure that the current balance (or nearly so).

With some minimal testing you could preclude outliers and select LEDs well within a working range (say no more than 100 mV variation in Vf) that can be paralleled very successfully.

It depends on your source of LEDs. A high quality epitaxi yields batches of chips with matched Vf within a few mV at rated current. This is due to the variation in ESR. In these cases 1 shared current limiting R works fine.

But few people know or understand this or know how to test this.

Thermal runaway may occur when the varation in delta ESR exceeds the junction thermal resistance Rja times the NTC Shockley coefficient of -x.x mV/'C, converted to delta mW/mW . If this ratio or thermal loop gain exceeds 1 you get thermal runaway.

Rth depends on layout of lead to board to ambient Rca and junction to case or lead Rjc as these add.

The rise in temp. results in a lower Vf which raises voltage drop on shared series R , which raises If [A] slightly. IF one LED is better than the rest with too low an ESR which dissipates about 10% of the total power say from 2.8 to 3.1V, this lower Vf can shunt the shared current of N LEDs now rapidly rises.

So the critical instability rises slowly with N shared currents but rise 2nd order with current and rises with \$\Delta ESR\$ which can vary 0.1% in one batch to 25% in open bin and unknown for unknown sources like EBay.

So if you don't know, use separate R's. If you do know then tandem LEDs may share current just it is done in 100W LEDs

Until it pops, and then the next LED with the lowest Vf goes through the same...

One resistor per LED is best.

1
Resistors with arduino
0
Uninterrupted current triggering transistor base
0
Mixing 2v and 3V LED's and calculating resistors
0
Voltage Mixer with 3 Resistors
0
Base resistor on transistor
2
Parallel circuit with LED on one path and resistor on the other
0
What is the use of these resistors in the schematic?
4
Circuit Analysis with an LED