Can we calculate the baud rate of RS232 communication from the TX output signal?

The below image is from an RS232 communication output signal. I took this picture with 0xaa, and the time period between highs is 100.us.

I heard that the external oscillator's frequency is 8Mhz. Can we calculate the baud rate from that? 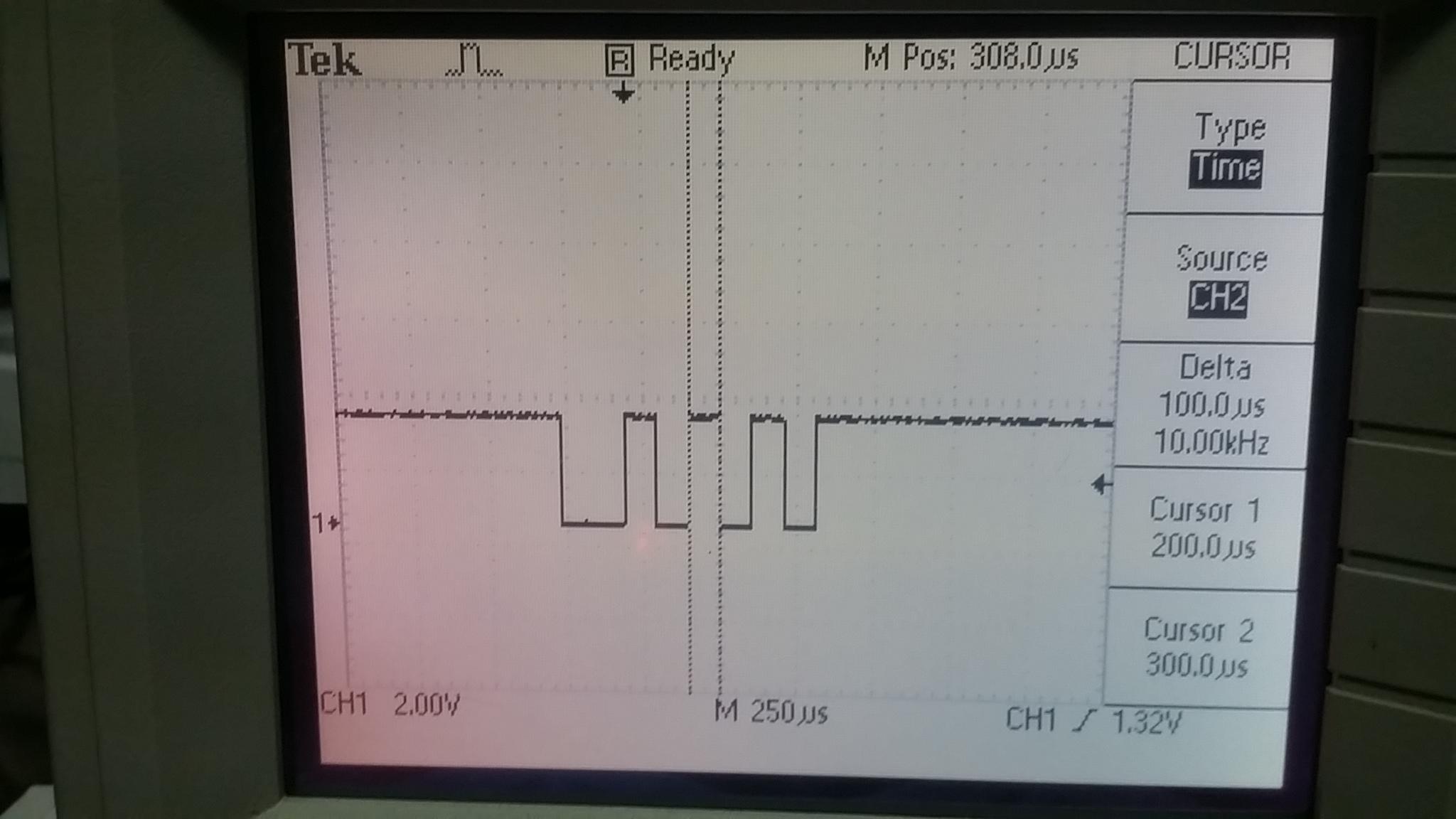 It looks like you have about 2.4 bit times per division, which are 250 µs. That puts each bit time at 104 µs. Inverting that yields 9.6 kBaud. That's one of the standard baud rates, so this sounds quite plausible.

Your scope shows the timing at \$100\:\mu\textrm{s}\$. This may either be you setting the cursors, or else the automated use of a measure function on the scope. You don't say. Either way, I agree with Olin's comment that this is close to 9600 bps, which is a common bit rate for RS-232 communications.

However, your own comment about the external clock rate would, if true, argue that an exact 9600 bps is unlikely. \$8\:\textrm{MHz}\$ doesn't divide down evenly to 9600 bps.

If you take the required START bit and the minimum one-bit-time STOP away, this means there is probably at least seven remaining bit times for data: 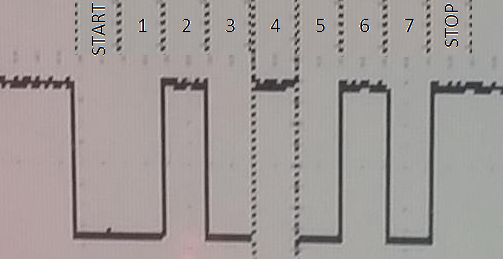 The above would be interpreted an 0x2A regardless of endianness, if I'm paying attention.

However, this would be the chart for eight data bits: 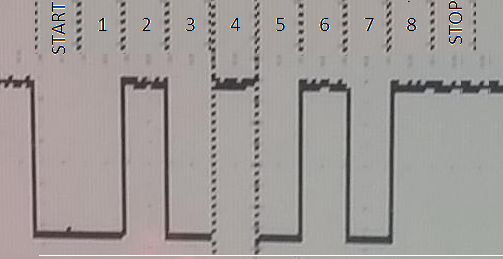 In this case, the interpretation would be either 0xAA or else 0x55, depending on the endian nature of the stream. So this could represent your 0xAA (little endian, which I believe is more common.)

As you can see, the transmitter and receiver must a priori agree on the number of data bits and the endian nature of them.

The scope results could be interpreted as even longer serial word sizes. I have seen them before (9, most commonly, as some ICs used to support it but I've even seen 10 used before.)

Without agreement, it's difficult to be sure.

I remember the days when teletypes were moving from 5 bits to 6 bits (early 1960's DTE) right at the time RS-232 was created in 1960, as my dad had such a teletype sitting at home in an home office space. Six bit RS-232 communications did actually exist for a period of time.

ASCII coding was widely used during the late 1960's and early 1970's and is a 7-bit coding. It was very common for RS-232 data communications to use 7 bits of data.

Later, as communications ICs and microcontrollers came into common use and 8-bit register sizes were abundantly available, RS-232 was often extended to transmit/receive 8 bits at a time.

I think most people today just expect it to be used for 8-bit communications. But that wasn't always the case.

If this is for a microcontroller, it's not possible to determine the baud rate from it's oscillator but an 8MHz crystal is definitely able to create 9600 baud.

Can you measure and tell me the exact time from the first low to the last high? - The first space looks slightly off to me. It seems to me you are using a trigger, can you move it slightly higher because if it is an edge trigger and sitting on the peaks, the oscilloscope will possibly have trouble triggering.

Determining baud rate from a scope trace is sometimes but not always possible.

The baud rate is the inverse of the bit period but the signal can remain in the same state for many bit periods so you can't always unambiguously determine the bit period from the scope trace.

Not the answer you're looking for? Browse other questions tagged uart rs232 or ask your own question.

1
Speed problems in homemade RS232-to-TTL converter board
2
UART as logic analyzer?
14
Max Serial Cable Length?
4
RS-232 for approx 1600ft
3
UART baud rate error tolerance
4
Microcontroller sending garbage to Raspberry
1
Retrieving data from Agilent 34401A Digital Multimeter over the RS232 interface
0
Upon setting up serial UART between two boards I can only monitor send or receive, not both, Why?