How to implement a filtered user button

I want to add a user button to my schematic design, so I first take a look at what I consider it could be a good source: the ST Discovery board schematic.

Their use case is the same as mine: user button, microcontroller configuration unknown, Vdd at 3.3 V. 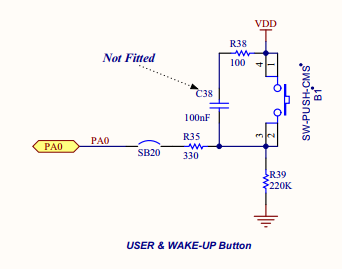 I think I understand most of it (correct me if I am wrong):

Now, here is what I do not understand: when the button is not pressed, considering stable conditions, at one side and the other of the button we have Vdd and GND potential, same with the capacitor. So...? (initial thoughts that I know must be wrong, but anyway...)

Could someone clarify how this works?

First of all, note that the capacitor is "not fitted". Therefore is not mounted on the actual schematics.

But let's suppose C38 is there!

R39 lowers the Vdd-GND current when the button is pressed (no need to waste current).

R39 pulls down the voltage when the button is pressed. It also charges the capacitor, when you release the button. The value is chosen a) to keep the vcc to gnd current low, b) to have a certain time constant.

The capacitor should filter the button bouncing and I guess it should charge/discharge through a resistor as well (R38?).

The capacitor filters the bounces. When you press the button, it is quickly discharged through R38. The function of R38 is to limit the initial discharge current, which could be also detrimental for the switch (even though the cap is only 100nF, so it has a minimal resistance). It also limits the discharge rate.

When we press the button, are not we shorting two cables at different potentials with no resistor in between? (3.3 V from the power source with 0 V from the condenser)

No, you are just shorting the capacitor, through R38.

The resistor could have been in series to the switch, but the capacitor should have been in parallel to this series. (In other words: in your schematics, place "vdd" on the left of R38). This can be done because R38 is very small compared to R39.

Yes, this is what happens.

If it is present, when you power on the circuit, it will act as if you pressed the pushbutton, i.e. it will give a high level pulse on PA0. This is because the capacitor is initially discharged, therefore the potential of the two terminals are at the same value (3.3V). The designers maybe later realized that

As reference, here is a case study on the bounce times of several switches: http://www.eng.utah.edu/~cs5780/debouncing.pdf

Not the answer you're looking for? Browse other questions tagged capacitor button or ask your own question.

3
What's this button called
1
What are the mechanisms at work in a pull-up or pull-down resistor circuits with a push-buttons and a GPIO?
0
Time delay dpdt relay using only pot, relay, and cap (discreet components and no transistors)
2
Can I operate a 12vdc valve using a capacitor and AA batteries?
1
Using transistors to replace push buttons
0
Step Response of an RC Circuit (Problem)
0
Momentary push button
0
Size of Decoupling Capacitors in Digital Circuits
1
How would you all implement a simple delay of a signal?