I've got a flyback transformer circuit, that was designed by a firm and they tended to over-engineer things (this is in a commercial project).

I re-laid out their circuit and on the primary end of the flyback circuit they have both an RC snubber and a TVS Diode protecting a MOSFET from transient voltages and for inductive loads when the MOSFET closes.

I've actually torture-tested this circuit and removed both the snubber and TVS diode at the same time and no magic smoke pours out of the FET as I am applying the maximum current with a PWM pulse to the flyback transformer (ie. it is receiving current, right below the saturation point and the peak duty cycle -- ie. transformer torture test).

Is there a reason you would want both, do they seem superfluous?

I could see a case where perhaps the RC snubber is protecting the MOSFET, and even though the flyback circuit can run for hours you are prematurely damaging the MOSFET by removing the snubber?

I really don't see the case so much for the TVS Diode... I have no idea what a transient voltage would look like in a transformer failure, but if the transformer fails the board is pretty much trashed anyway from a product perspective.

Without a schematic, it is difficult to judge. A \$RC\$ snubber is different than an \$RC\$ damper. What is possible is to have the parallel combination of a damper and a TVS as shown below: 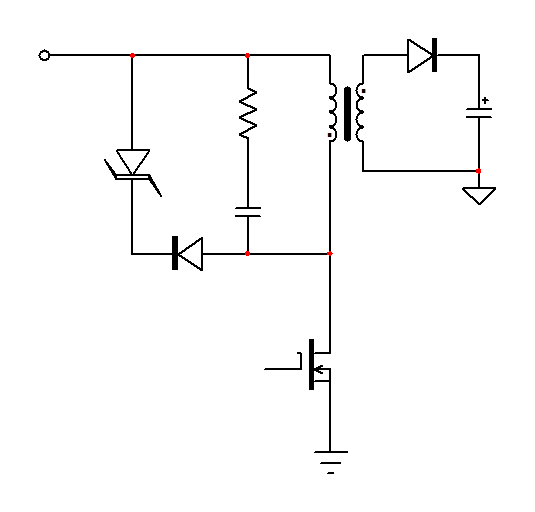 The \$RC\$ network is there to damp the resonance of the leakage inductance and the capacitance lumped at the drain node. Sometimes, the leakage contribution is so energetic that when the TVS series diode blocks, the ringing on the drain can go below ground and forward-bias the MOSFET body diode. Not a big deal with a discrete MOSFET but it can inject carriers into the substrate if we talk about a switcher featuring a lateral FET. By dissipating energy, the \$RC\$ network will damp the resonance and keep the leakage ringing under control. Reverse-bias of CMOS-based switchers are a cause of destruction and must be avoided.

A TVS is a) an expensive device (compared to a classical \$RCD\$ peak clamp and b) it radiates a significant amount of energy as the leakage inductance reset time is very small. For all of these reasons, TVS are rarely used in commercial products. However, again, if you have a switcher with an integrated FET, as its body diode is lightly doped, it cannot accept accidental avalanche and a hard clamp is truly needed, hence the TVS presence. Please keep in mind that beside delivering power at nominal input, these power supplies (at least for quality models) have to go through numerous input surges tests and must survive them. Sometimes, protection components that look superfluous are there to pass these tests and keep silent for most of the time. I would not remove them : )

Not the answer you're looking for? Browse other questions tagged pcb-design transformer tvs snubber or ask your own question.

2
Mosfet Snubber with Inductive Load
1
How different is the performance of TVS vs Zener diode in flyback protection
3
24V Circuit Protection - Fuse, TVS Diode, RC Snubber
10
TVS diode before or behind resistor
6
Is this snubber needed for MOSFET?
0
Confusions with placing and sizing the flyback diode, TVS and Zener
0
High Voltage applied to TVS diode
3
Design R C snubber for flyback converter