I will make an interface for a 10k wind-vane recommended in this document. I will follow the recommendations but I don't understand the explanations of the document and I have at the end four short questions regarding the same interface which are confusing to me.

Here is the recommended way of interfacing the vane from the document:

I want to use 12V supply for the opamp buffer and around 8.5V(through a linear regulator) for the vane. So I wanted to simulate all these in LTspice where I mimic the potentiometer of the vane by varying R4 and R3 in the following circuit:

Here the plot of vane and buffer outputs for 10k range:

Below the zoomed plot of vane and buffer outputs when pot is around 1 ohm:: 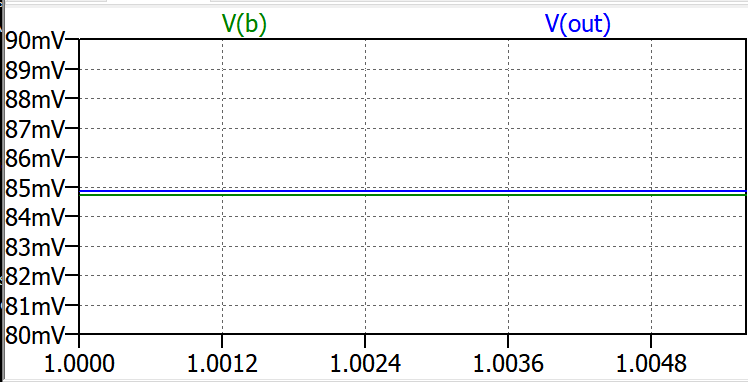 Finally the zoomed plot of vane and buffer outputs when pot is around 10k ohm:

If my drawing to LTspice is correct(?):

Similarly, the 1 K ohm series resistor shown in the wiper lead prevents short circuits from causing over-current damage to the potentiometer. If the sensing circuit has an input impedance greater than 1 K, the additional resistor is not needed.

I don't understand what meant here. Totally lost. Can you give an example how can be a short circuit? The opamp has already huge input impedance why then they use 1k just after they claim the additional resistor is not needed if the sensing circuit as an input impedance greater than 1k?

The 270 k Ohm pull-down resistor is desirable to make sure that the input reads North when the wiper is in the deadband, and is open circuited.

I can understand that 270k will pull down the input signal to the opamp when the wiper is floating. But why 270k? Why not 1Meg for less error?

I cannot picture what is meant here as well. Is it possible to explain this by a simple drawing? I don't get why potentiometer range is reduced and why the deadband is compensated.

First of all the document adds resistors to overcome deadband issues and shorts ect. and this introduces error. But the same document suggests buffering. Most of data acquisition systems have at least 100Meg input impedances which would not cause loading. What can be the benefit of buffering here?

You would be wise to include at least another passive LPF in the receive port to avoid an ECN on cuts and jumpers. Because you will get some noise with a high speed ADC from the cable acting as an antenna.

1) First of all 360 deg pots have a limited rotational life and even less with constant dither back and forth. This life is reduced further if there is any significant current flow in the wiper at the terminals. The shunt cap can cause thus current when dithering between +V and 0V hence why the 1k series R is suggested limiting current swings to about 12 milliamps into your load cap if it oscillated back and forth near North where terminations are located.

Given this sensor has a 8 degree deadband this matches up with Wirewound Bournes pots worth about $25 in volume. They are rated for 500k rotations with no load current but nothing said about oscillations. Whereas Conductive Plastic circular pots tend to have a deadband of 20 deg but rated for > 2 million rotations.

3) I'm not sure of the chance of miswiring the wiper to Vcc or 0V in the field, but a 100 Ohm current limit resistor prevents wiper damage if that happened. Since 200 ohms adds to the 10k ohm by 2% this introduces attenuatuon error but then reducing the range from 360 deg to 352 deg increases the sensitivity by 360/352=1+2.27% so this cancels this attenuation error pretty well.

4) Buffering depends on Op Amp's ability to drive a long cable capacitance. For EMI reasons long cable with high input impedance are prone to significant EMI interference. So depending on proximity of noise to the cable, a buffer with low impedance over the noise spectrum, or a CM choke with shielded pairs or other considerations.

One better way to implement wind direction as our team did in designing Met. Canada remote weather stations used a "Grey Code" rotary encoder. (circa '75)

These days the optical quadrature encoders with 1000 pulse per rev is owned now by Broadcom (once HP) that use these encoders and a special CD with the patterns for about the same price as a Bournes WW pot.

Many students and young engineers fail to recognize how important it is to eliminate Common Mode (CM) noise at the source, especially SMPS ground currents and the routing of ground.

Consider if you have a SMPS with considerable common mode noise . This conducts along the coax shield and couples to the high inpedance input via the cable capacitance of ~100 pF/m thus 50 m sees CM Noise coupled to your input signal at some f via 5000 pf which is some Zc(f) switching frequency, lets say 50kHz. So the cable acts as a shield for outside radiated noise but now becomes a path for conducted ground noise. Now the source impedance of your driver if it were 50 Ohms would permit an EMI ingress. You may need a low pass filter at the ADC or a CM choke since you have a high impedance input and a non-zero impedance source and a possibility reflections. Also any linear driver or buffer has an output impedance will rise from near zero to high values (xx ohms) at it's unity gain bandwidth.

Often people prefer shielded balanced pair to avoid these coupling problems and do not earth ground signal ground at source.

1
Controlling audio signal with digital potentiometer
0
Problems with op amp thermocouple circuit
0
Why is using a potentimeter as a rheostat treated different way than a resistor?
0
Signal buffer with op-amp clamping and voltage bias
0
Buffering and filtering a sensor output
1
How to simulate analogue output sensor with MCP3008 ADC. Can I use a 10K potentiometer with Raspberry Pi 3.3v?
0
Buffer OPAMP feedback resistor
0
What could be the reason to use a current source for potentiometric vane measurement?
2
What's the effect of shorting the wiper terminal with one of the ends of a trim pot?