How to convert from power signal received by Antenna to voltage signal? 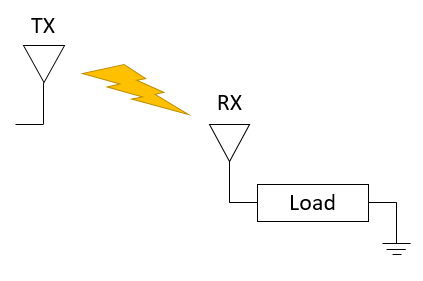 Please someone teach me where I have misunderstanding

Now think about your receive antenna and importantly, don't think of it as a wire, think of it as a collector of power with a certain area - this is called the aperture of the antenna and is measured in square metres. Up close to the transmit antenna the energy density is greater and more watts are packed into a given area. Further away there are fewer watts per square metre so your receiver (with a fixed aperture) cannot receive the same power.

If your receive antenna's aperture "collects" 0.5 watts at position A it will collect one quarter of that power at position 2A.

There is no trade off with load resistance - you get the power that is collected by the receive antennas aperture. If of course your receive antenna is up really close to the transmit antenna you are in, what is called, the "near field" and this is much less predictable - you get induction and electric coupling effects and you can, under the right situation "load" the transmit antenna and produce much more difficult to understand relationships.

So, if you are just talking about EM radiation from an antenna you are in, what is called, the far-field. This nominally begins about 1 wavelength from the transmit antenna so, at 2.4 GHz this is round about 10 cm.

So, what I've largely said above, is about far-field power transfer and not near-field stuff. In the far-field the power you get is immutable by impedances - the receive antenna can only "collect" what is delivered and that is nearly the end of the story however, if you don't provide the correct impedance to the antenna you won't maximize the power potential. Any antenna has an impedance and this is vastly frequency dependent so, you are limited even more.

In short, in the far-field you get what power you are given and, you have to match impedances to maximize that power.

Now one probably could design an antenna to match into 1 ohm, or 0.1 ohm, or 0.01 ohm (But things are getting VERY lossy because of secondary effects), but in all cases the power delivered will be equal (apart from the losses due to poor antenna efficiency), you will see much less voltage and more current as the system impedance drops.

Now a free space path loss of only 20dB seems unlikely to me, with a 1m separation and isotropic antennas for example you have ~40dB of path loss at 2.4GHz, and you can add 20dB for every decade of path length, so you might want to look at your numbers.

Not the answer you're looking for? Browse other questions tagged rf antenna wireless wireless-charging or ask your own question.

7
How does this quartz antenna work?
2
GPS Antenna Selector: How to electronically select one antenna from multiple available antennas?
1
Radiated power from an antenna
24
Is it possible to receive information if the received power is below the noise floor?
2
How to model an antenna as a voltage source?
0
Amplifying signal strength of a u.fl antenna
1
Friis Free Space Equation for Received Power