Equivalent resistance and circuit reduction of an “8”-shaped circuit [duplicate]

I am having trouble reducing a specific "shape" of circuits resembling the figure 8 like this one: 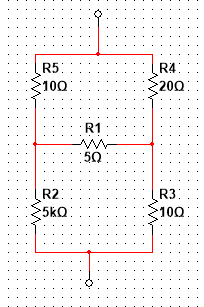 I can't figure out what is in parallel and what is in series. I want to reduce the circuit and find an equivalent resistance. I just assigned arbitrary values to the resistors in MultiSim. I'm not looking for an answer to this specific problem, rather I'd love some help as to how I can reduce circuits that look like this one.

By knowing the voltages at the two internal nodes, you can find the current the whole net is drawing. That is either the sum of the currents thru R5 and R4, or thru R2 and R3. Both should be the same. It would be a good idea to compute both and verify that they are indeed the same. If not, you made a mistake somewhere.

Now you know the voltage across the net and the current thru it. You find the equivalent resistance of the net by using Ohm's law.

There are more direct ways to reduce this problem, but this way gives you some insight into what is happening, and provides oppertunities for sanity checks along the way. You can also use this method to derive a direct formulaic answer.