Recapturing side and back lobe radiation from a directional antenna

When you look at the radiation pattern for a directional antenna, you see a major lobe where the greatest concentration of radiation is found and side and back lobes that have much less concentrated radiation.

I was wondering what methods, if any, have been developed to "recapture" the side and back lobe radiation and concentrate it in the main lobe for greater antenna performance?

The goal of all directional antennas ("antennae"?) is to redirect energy into the desired direction.

For example, look at the ubiquitous Yagi antenna: 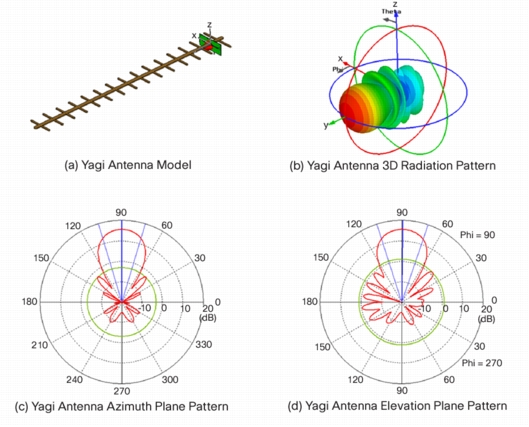 In this case, there is one element behind the radiating element which is know as the "reflector". This acts as a mirror to direct that energy to the forward direction. There are also a number of elements in front of the emitter, called director(s), which focus what would be "sideways radiation" towards the front.

Note that the reflector and directors are parasitic. That is, they aren't driven, and only affect the radiation pattern based on their geometries.

So, when you look at a radiation pattern that shows back and/or side lobes, those lobes represent the energy that's left over from the attempts to direct it forward.

The most efficient way to capture and re-radiate is to add more material (metal or, in some designs, dielectric) to reflect or diffract the radiation — and that's what designing a higher-gain antenna is. Make the dish bigger, add more Yagi elements, et cetera.

Anything that is “cleverer” than that will be bigger or lossier than simply improving the main antenna.

8
Helical antennas and orientation
7
Possibility of an extremely directional antenna
3
What is this antenna called, and what does the polarization and radiation pattern look like?
6
What is the 3D radiation pattern of this chip antenna?
3
Can 2.4GHz antenna radiate through a small enough enclosure opening?
9
Directionality and gain: yagi versus parabolic antenna
0
How can a crossed dipole (turnstile) antenna be omnidirectional in 3D?
1
Antenna Radiation Patterns Explained