What does this op-amp circuit do? (part of an ECG)

I would like create an ECG circuit based on this schematic (from the AD620AN datasheet): 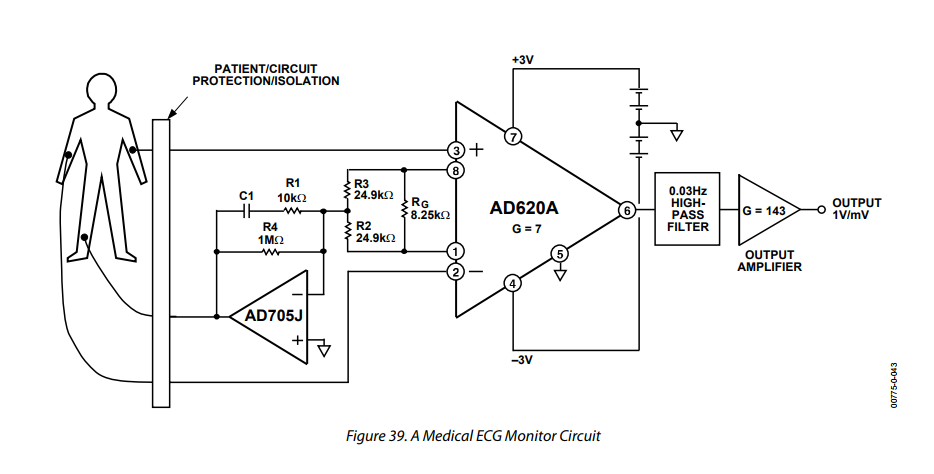 I don't know this part of the circuit and how it works. I know this is called a right leg driven circuit which is reducing the effect of the noise. But I don't know exactly how negative feedback works in this case. Can someone help me? 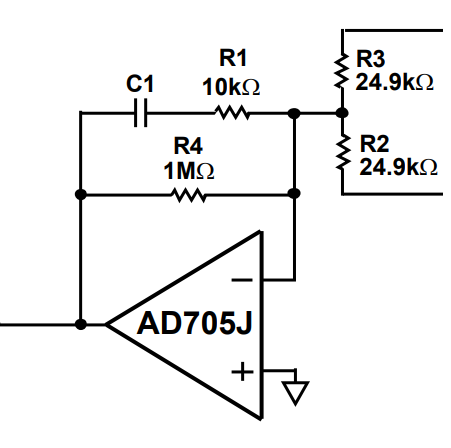 The right leg driver tries to drive the average voltage of the body to cancel out noise. The right leg is chosen because it is far from the heart, so any signal injected on there will be common mode to two electrodes near the heart.

The right leg drive is much more tightly coupled to the body than ambient noise it picks up from capacitive coupling to things like the AC power in the room.

The network in the feedback path of the right leg driver opamp provides some low pass filtering of the signal.

This circuit, and the need for it, make much more sense when you consider some things that aren't depicted. First, remember that is is necessary to establish some sort of reference voltage on the body, so that the voltage at the measurement electrodes has some reference with respect to the circuit.

Picture this reference being established by a Right Leg electrode directly connected to circuit ground. If a zero-impedance connection to the body could be made like this, we'd be done, and there would be no need for a driven leg connection.

In fact, the connection between the reference electrode and the circuit can be kiloohms, or tens of kiloohms. Now, because of the common-mode voltages riding on the body, and the fact that the reference electrode is connected through highish impedances to ground, there are stray currents. (This is less of a problem on the signal electrodes, which go into very high input impedances, as opposed to ground). 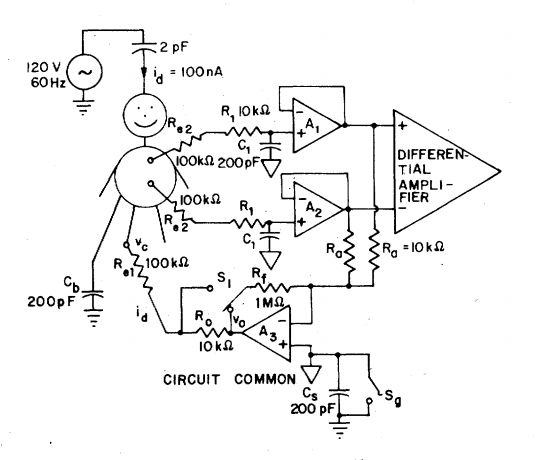 I'm attaching Fig 1 from Winter, Bruce B., and John G. Webster. "Driven-right-leg circuit design." IEEE Transactions on Biomedical Engineering 1 (1983): 62-66., which show electrode impedances drawn in, but I highly recommend reading the paper if you can get it, as it shows very clear derivation of the effective reduction of impedance.

EDIT: I saw this weird circuit solution for the first time a year ago and it immediately caught my attention. Then I managed to reveal and roughly describe the idea behind the circuit. Now I want to expand these explanations with some new insights. Here is another more detailed circuit diagram - Fig. 1: 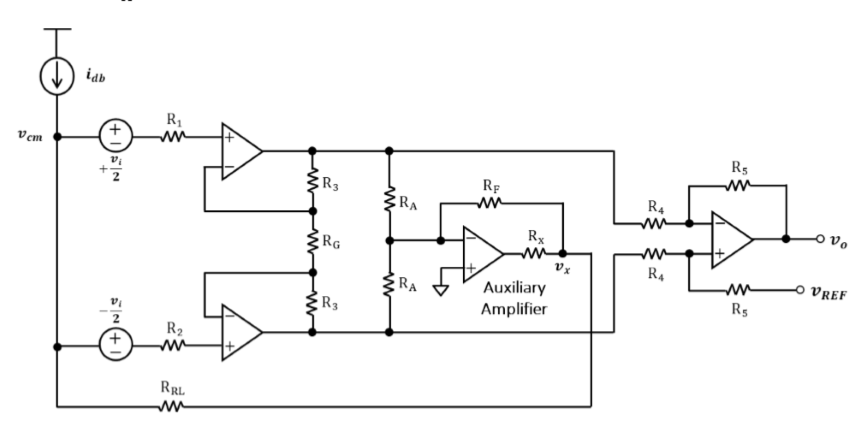 Obviously there was some clever idea of suppressing common-mode signals. What was it like?

In order to grasp the fundamental idea, I first removed all the minor details that hindered understanding - Fig. 2, and started trying to see familiar circuit building blocks and principles. I simplified and sketched out the circuit diagram and focused around the part with AD705 op-amp: 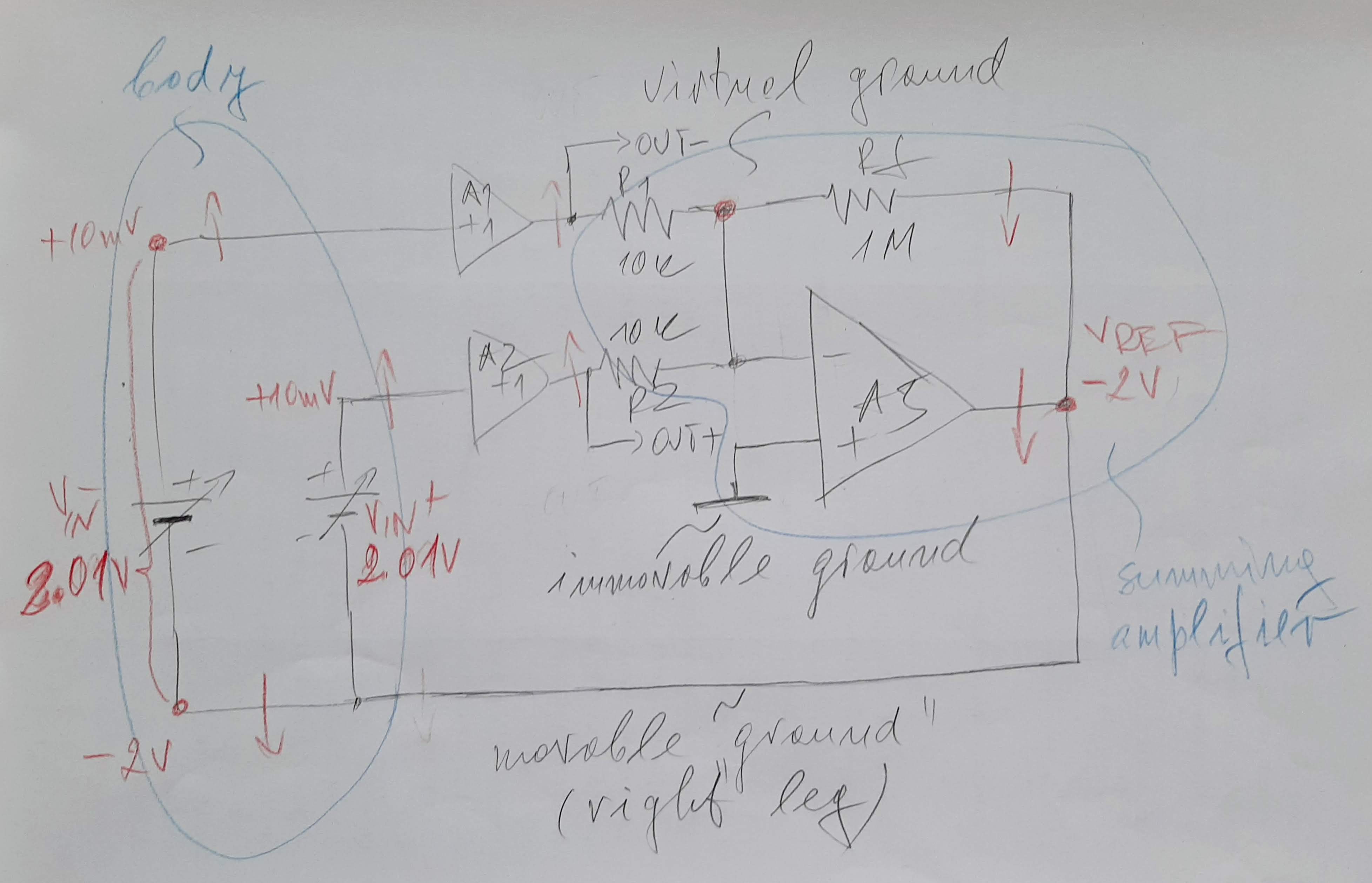 Structure. First I saw two single-ended input voltages (VIN- and VIN+) between the signal electrodes and reference electrode. Surprisingly their input "sources" (the human body) were not grounded; instead, they were connected to the op-amp output. What the hell was that?!? Aha... they were connected to a "moving" ground, which probably allowed their simultaneous (common-mode) variations to be suppressed.

The input voltages were buffered by amplifying stages (A1 and A2) with high input impedance. Usually, they were implemented as two paired non-inverting amplifiers (Fig. 1) but, in regard to the common-mode signals, they acted as voltage followers. That is why I did not draw the network of three resistors between the outputs of the input amplifiers (the input part a classic instrumentation amplifier) because it was important only for the differential mode.

But what did the 2-resistor circuit between the follower outputs serve? I realized that an op-amp inverting summer was built with the help of Rf and A3 with the purpose to produce the common-mode voltage.

Operation. Imagine that initially both input voltages are zero. So the op-amp output voltage VREF (of the right leg) is zero as well.

So, in respect to the common mode, the weird RDL circuit can be thought of as an op-amp inverting summer with input sources "grounded" to its output instead of the true ground. Because of this "movable ground", the common-mode signals are suppressed.

If we combine both input voltages and resistors in one, we can think of this arrangement as an inverting amplifier with gain of 200, which output is fed back by VIN - Fig. 3: 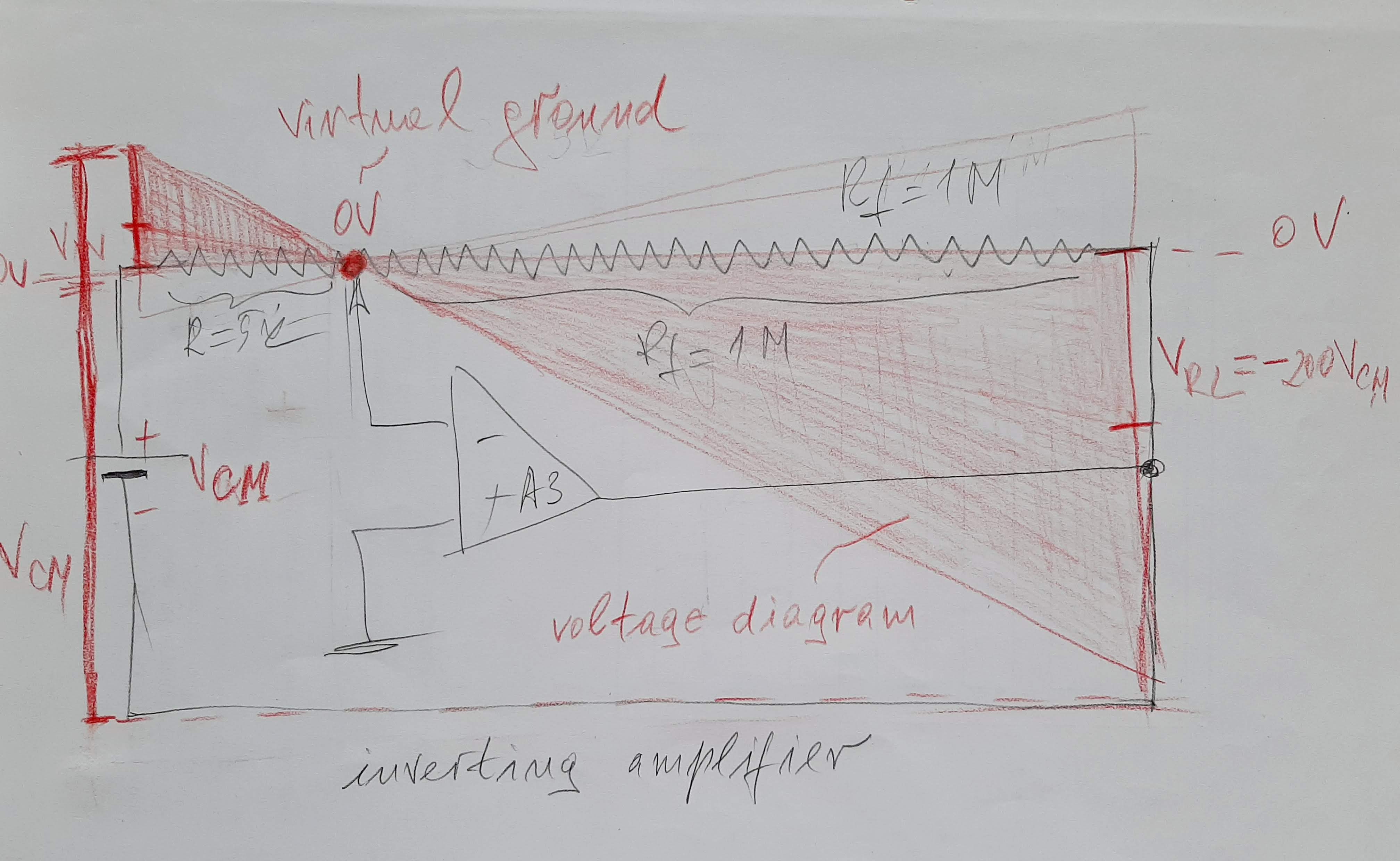 We can see here two negative feedbacks - local (implemented by Rf, R1 and R2) that is used to make the op-amp summer and global (by VCM) that compensates the common-mode voltage. The latter has another important function - to compensate for the voltage drop across the contact resistance between the human body and the reference electrode. How does this magic work?

This undesired resistance is put into the negative feedback loop and the op-amp observes the voltage after this disturbance (at its inverting input)... and keeps it almost zero. For this purpose, it lowers its output voltage even more thus compensating for the undesired contact resistance... like in any op-amp circuit with voltage type negative resistance.

I have attached circuit diagrams sketched with pencil and rubber to illustrate more realistically the course of my thoughts that led me to this explanation. Of course, I could outline them beautifully... but so they will become less informative...

Not the answer you're looking for? Browse other questions tagged operational-amplifier biopotential ecg or ask your own question.

5
What does this op amp/transistor circuit do?
0
Simple circuit with operational amplifier (intended to be ECG) not picking up actual readings, only noise
7
ECG: gain of right leg drive?
0
Questions about LM741 in an ECG Circuit Schematic
0
Can someone help me understand why exactly high CMRR is so important, particularly in medical instrumentation like ECG?
0
Choosing the right op amp for ECG application
4
How does a driven right leg work?