The problem about active low ,and how can i know it from the waveform

This picture is the simulation of D-flip flop with both active low reset and set,and i know active low means when the signal is 0 ,it means on .but how do i know it is active low from this picture? 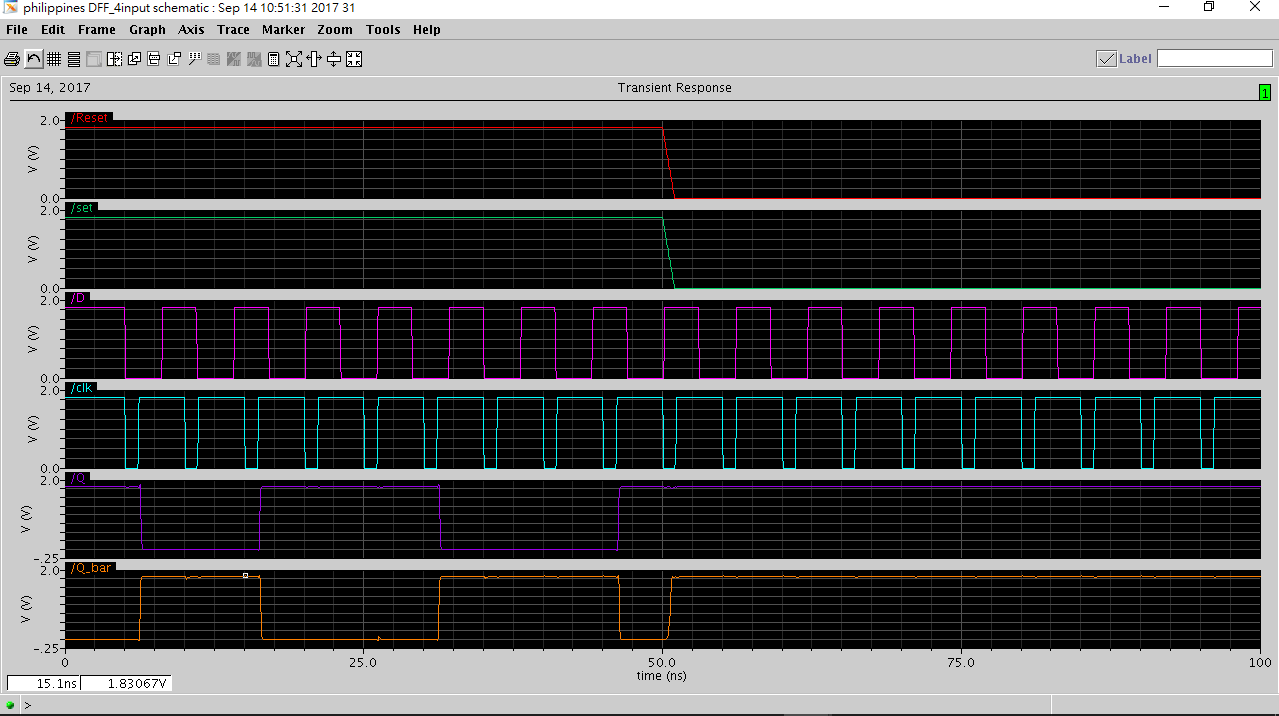 but how do i know it is active low from this picture?

You know the SET and RESET signals are active low, because when they were both high, the input was transferred to the output with each rising clock edge. This means SET and RESET must have been de-asserted when high. Meaning they must be active low signals.

An active-high RESET and SET could be implemented by just putting an inverter in front of each of the existing RESETn and SETn inputs. If you did this nothing about the behavior of the circuit would change except the RESET and SET behaviors would happen when the corresponding inputs are high rather than low (and there would be a slight delay in the flip-flop recognizing these inputs). In case both SET and RESET were asserted (which would now mean they were high), you would still see both outputs go high.

When Set and Reset are both active,you mean both active high? or active low?

I think you misunderstand what "active high" and "active low" mean.

These terms indicate how the circuit is designed, not the state that they are in at an instant in time.

"Active low" means the circuit is designed so that a low voltage (for example, 0 V) indicates a logical "true" value, or a logical "1" or an asserted state; while a high voltage indicates "false", "0" or the de-asserted state.

To put it in a table, an active-low design might have

while the complementary active-high design would have

(Caveat: Due to De Morgan's rules, the same physical gate might be used in either an active-low or active-high circuit. But a circuit that implements a NAND gate in active high logic would implement NOR in active low logic)

When Set and Reset are both active, both outputs are high. If both are released at the same time, the output state is unknown as the function depends on only one being active.

Clock works on negative (BF) positive edge in your simulation which is common for CMOS. never both edges as you may have indicated in comments.

Beware that many different ways of ASCII representation for active low include /R, R!, R_ and _R and Q,Q _ means Q,Qbar when it is hard to use \$Q,\bar Q\$ using tex \bar - Q_bar might be considered redundant.

1
How can the flip flop neglect clear when given output is given as feedback?
0
D flip-flop with a synchronous reset, R
0
Little confuse about the truth table about D-flip flop
1
Is there a way to change only one of the outputs of a D flip-flop?
5
I know what a Reset signal is, but a Set/Reset signal? Isn't that impossible?
0
How is asynchronous reset physically implemented in a flip-flop?
1
Toggling the Output in VHDL