I'm working on my first small electronics project; building a small LM317 based power supply. I've built the circuit as shown in the data sheet (black part of the circuit diagram below) on a perfboard. Now I wanted to add an LED to indicate if the switch is in on (bottom) or off (left) position. I added it to the circuit as shown below (red). However, the LED doesn't turn on if I switch to on position (the power supply itself works fine).

My question is: can this even work if the LED were connected as indicated in the diagram? If not, what would be the easiest solution to get such an on/off indicator LED? 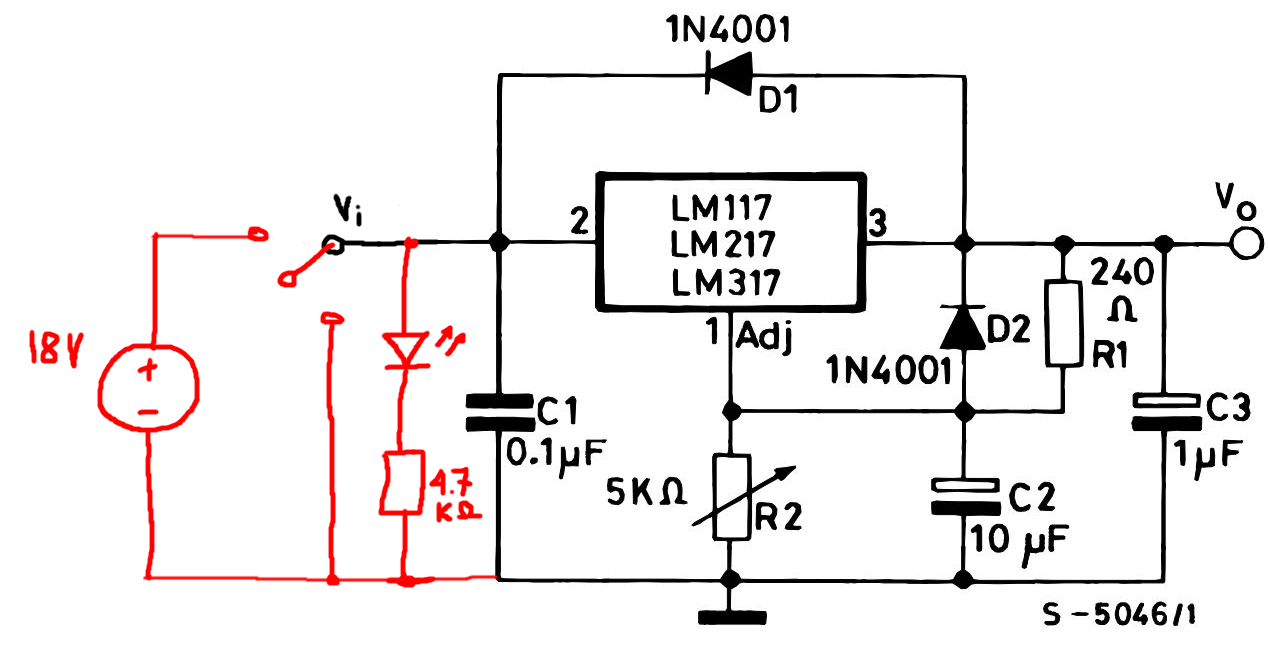 Since you're new to electronics the power supply is a good way to start. You'll need one for everything you want to do.

AndrejaKo and the others already told you what's probably wrong: you installed it the wrong way, which killed it, because while most diodes can stand the 18V reverse, LEDs can't. What did you do? Just try it one way and reverse it if you saw it was wrong? OK, now you know that you can't afford this with LEDs. 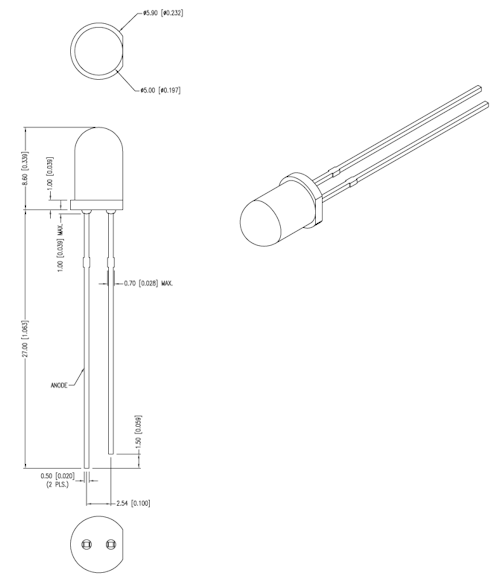 There are a few differences between the pins. One pin is longer than the other, the LED's rim isn't complete on one side, and if you look into the LED you may see a thin wire going from the chip to one of the pins. The wire is usually the anode. Usually! Don't try it if you're not sure, remember you don't get a second chance. Use whatever the manufacturer indicates as the anode. In this case that's the longer pin. Only rely on that. That's your anode, which goes to the plus.

If you wouldn't have a datasheet there's still a safe way to try it. Place two of your LEDs in anti-parallel: the anode of one LED to the other's cathode, and vice versa. Place a resistor in series and connect to a 9V battery (or your new power supply!). One LED will be correctly polarized and that will light, the other one will be reverse polarized, but the first one's forward voltage (around 2V for a red LED, 3.5V for a white one) will limit the reverse voltage to a safe level.

Another thing mentioned is your resistor. Nine out of ten it's too high, though you should still see the LED light faintly. Again there's the datasheet. You want to know the LED's nominal current, which is often around 20mA for an indicator LED, but also its voltage drop. The same datasheet says 40mcd at 20mA, and the voltage is 2V typical. Then you use Ohm's Law to calculate the series resistor:

There's still another possible explanation why it doesn't work. LEDs are sensitive to ESD, ElectroStatic Discharge. Touching the LED when you're statically charged to a few kilovolt will also kill the LED. It's possible that many of the components you'll use in the beginning won't be so sensitive to this, like resistors or capacitors. CMOS is also ESD sensitive. If you don't have ESD protection (probably not yet) then touch a large metal object before you handle the LED.

First, if we assume say 2 V drop on the LED (and it's probably more), we have just around 3 mA going through the LED with the chosen resistor value. That may or may not be enough to turn on the LED. Test it in a separate circuit if you can. Anyway, I'd start with a lower resistor value. You didn't give us the specifics of the LED, but usual maximum current for say 5 mm LEDs is 20 mA. Try picking a resistor that will give you at least 10 mA, just to be safe. Something like \$2.2 \mbox{ } k \Omega\$ resistor would be a good start. Tweak it from there if you need to lower the current consumption of the LED or if it's too bright.

The other point is to check if everything is installed correctly. Maybe the LED is connected in the wrong direction? In which case it's now dead, LEDs can only stand a couple of volts reverse.

Not the answer you're looking for? Browse other questions tagged power-supply led switches lm317 or ask your own question.

2
Assistance on values and components, photo-transistor switch for LED array
2
Issue with multichannel LM317 circuit
1
Why is this multimeter power supply short circuit when off
0
Comparator - Short circuit indicator. Possible to design a bi-color LED version?
0
How to connect auto cut off circuit with battery level indicator?
0
Battery indicator connected with bicolor led
1
LED indicator - How to show 'on' when circuit is open
1
How to fully shut off an LED indicator when used with a Smart Switch?
0
Switching a fan on/off based on an LEDs current