Our professor assigned the following question:

All I know from the reading and lecture is that your voltmeter needs to have a much higher impedance/resistance than the circuit resistance in order to avoid the meter loading effect, which causes instrument misreadings. How MUCH higher impedance/resistance does the voltmeter need to have in relation to the circuit resistance? I don't know how to do the math (the "quantitative" part). Is what I said sufficient enough for a "qualitative" explanation?

I emailed my professor yesterday morning. He never got back to me, and this was due last night.

Quantitatively: If the applied voltage is 10 Volts, you should measure 5.0 Volts across each resistor, but you actually would measure 2.667 Volts

First off, I removed the battery symbol. It's enough to specify a ground (you get to pick any one wire [aka: node] and call it \$0\:\textrm{V}\$) and the source voltage point.

Second, it doesn't matter which of the two \$35\:\textrm{k}\Omega\$ resistors you measure across (you should get the same answer either way), so I placed one end of the voltmeter at the "ground" (zero) reference point and the other end at an "interesting" point. If you look this over, you should be able to see that it asks the same question as does your newly added schematic.

Third, I've separated out the internal meter resistance as a discrete, added resistor to the schematic. The idea here is that now the voltmeter has "infinite" resistance and so it does not affect the circuit, anymore. But to keep the behavior the same, I had to add \$R_{METER}\$. Given your own schematic, I think you can see why this would still be the same question. 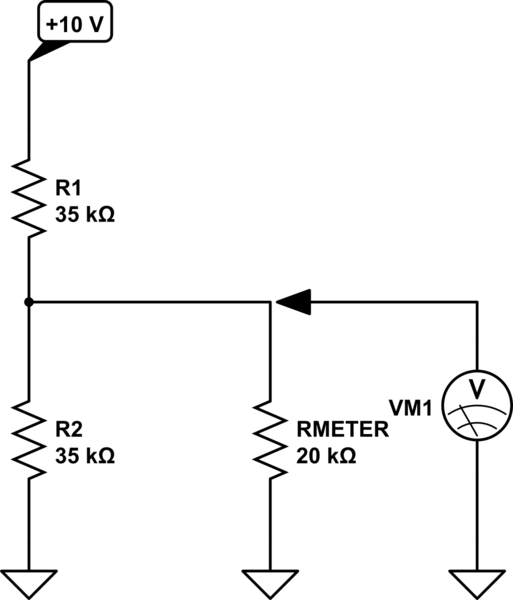 Now, you should know how to calculate parallel resistances. So you can compute the equivalent single resistor you could use to replace the pair of \$R_2\$ and \$R_{METER}\$.

Now, it's just a voltage divider made up of two resistors. \$R_1\$ is still the same, but you now have a new replacement resistor that replaces the pairing of \$R_2\$ and \$R_{METER}\$. (Above computed value.)

From this divider, you should be able to calculate the resulting voltage.

An entirely different approach would be to construct the Thevenin equivalent before attaching the meter to it. This would be:

Once again, you have a new voltage divider circuit that will yield the exact same result. But a different approach to getting there.

Instead of claiming you can't do this, stop and actually think about it.

Note that you are told that the 35 kΩ is in series with another 35 kΩ resistor. Basically, the 35 kΩ resitor you are to measure the voltage on is being driven by a Thevenin source with 35 kΩ impedance.

You really should be able to solve this easily from here. I expect the professor didn't get back to you because he thinks this is a easy problem you should be able to figure out yourself with a little thought. He is right.

How MUCH higher impedance/resistance does the voltmeter need to have in relation to the circuit resistance?

@Jonk has already taken you through the steps of how to calculate what's going on exactly. However it's worth addressing the other part of your question in a very rough and quick manner, when is a meter high enough impedance?

Let's say the meter has 100x the impedance of the components you're trying to measure. The current flowing through the meter will then be about 1% of that in the components, which will reduce the measured voltage by about 1%. It's not exactly 1%, you need to go through all the sums for the exact figure, but roughly, in that ballpark.

Is 1% close enough? It's comparable with the inherent accuracy of most cheap meters, and most reasonable components, so it would be adequate for many purposes. Sometimes you would want to know you weren't degrading your meter accuracy by any significant amount, and limit the added error to 0.1%. This would require the meter to have roughly 1000x times the circuit impedance.

Most DMM have a 10Mohm input resistance. This means that you can measure circuits with 10k resistance with around 0.1% added error, and up to 100k with about 1% added error.

Not the answer you're looking for? Browse other questions tagged voltage resistors resistance impedance homework or ask your own question.

2
Resistor before voltmeter
2
Why does a voltmeter read lower across a load than across a supply?
0
At what resistance do I not see a voltage drop across a resistor?
0
Calculating Resistance of Unknown resistor, total current and voltage across each resistor
0
Clipping observed across small resistor when attempting to measure op amp output impedance
8
Under what conditions would using a voltmeter be more accurate than an ammeter to measure current?
0
Measuring Current Using A Resistor?
0
voltage across low resistance and short circuit
0
Measure resistance of resistor in cirucit