Stabilizing opamps - am I doing it right?

I'm designing a high current linear regulator and learning about real opamps as opposed to ideal ones described in tutorials all over the net as I go. 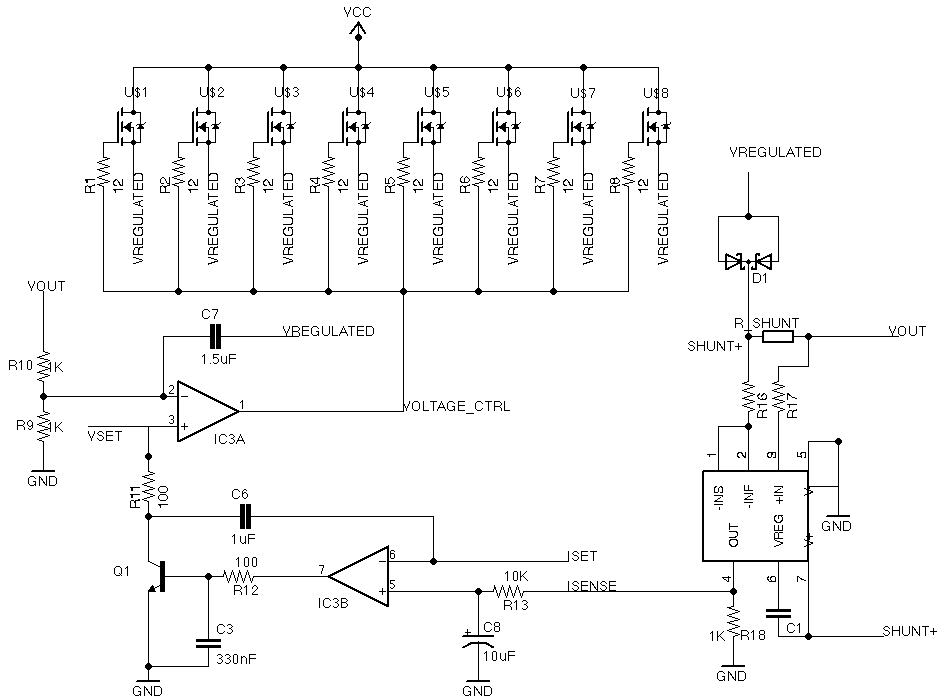 My initial voltage regulation design was stable enough under the resistive load, but oscillated under capacitive load. So as I've learned on the net, I had to isolate opamp output from external capacitance and add a capacitor on negative feedback - C7. At first I've tried adding a cap from output directly to IN-, it worked, but I've noticed that when i add feedback after MOSFET output, it works better.

When I've added current limiting, the output would oscillate heavily when in current-limiting mode and the only way to stop that was to add RC network R13, C8 and a feedback cap C6 - this one worked only when I connected it on transistor output.

What I'm concerned about is that negative feedback caps are rather big, way bigger than anything I was able to find on the net as examples.

Am I doing it right?

The first rule of a control system is to never get information late. Unfortunately, this is exactly what low pass filters in the feedback path do. In particular, R13, C8, R12, C3, and C6 are going to cause stability problems in current limit mode. Also the fact the IC3B is being run open loop means the current shut off signal will slam back and forth. You are basically feeding a digital signal into a linear control loop. That is fine for something like a hard shutdown, but is not going to work for any kind of regulation.

The above is assuming the mess in the lower right corner of your schematic is a current sense so that its OUT pin is ultimately a ground-referenced voltage proportional to the current thru R_Shunt. The rest of your schematic is mostly reasonable, but this mess needs to be fixed. There isn't even a component designator for that chip, let alone any indication as to what it is!

If you want to tweak the controller for good response, you need to do careful analysis. This is usually done in the S domain (Laplace transforms) looking at poles and zeros. I won't get into that here. If you want to keep it simple and are willing to give up some performance, then use the easy rule that says to make sure the controller has lowest bandwidth of anything in the system.

In voltage mode, your controller is IC3A, the thing being controlled are the FETs, and the feedback is R10 and R9. That's a straight forward system that looks reasonable except for C7. I would put C7 directly between the negative input and the output of IC3A. That effectively slows the controller. More capacitance slows it more. Eventually you reach a point where the system is stable enough. AC-wise, Vregulated and Voltage_Ctrl are close enough so that C7 still largely works where it is, but it would be better where I described. To allow for smaller values of C7, make R10 and R9 larger, like 10 kΩ for example.

On a separate note, what is D1 for? Unless you think the load can back drive this power supply, that is just a waste of a diode voltage drop.

Now that it has been clarified that this circuit is for charging a "12 V" lead-acid battery, more specific recommendations are possible.

We know the load won't change suddenly, so transient response is not a important consideration. Therefore compensating IC3A with a cap from its output to its negative input is good enough. Find the cap value that seems to make it stable and double it. The response will be slow, but again, that matters little for charging a battery.

To do current limiting, I think it would be easiest to use a separate controller with the FETs being driven by the lower of the two controller output voltages. This could be as simple as diode ORing between the two, although that would require a pullup for driving the FETs high, which would make the high and low drive assymetric. One possibility is to do diode ORing of the voltage and current mode control opamp outputs, then buffer that with a third opamp which drives the FET gates.

The trickiest part will be to make sure there isn't instability when the supply crosses over between current and voltage regulation mode. I think if each of the two controller opamps are sufficiently slowed down with a cap between their output and negative input this should be OK. Some experimentation will be required. Fortunately you are in a position to err on the side of slow response in favor of stability, so this should all be doable.

If the current detection is meant as a fail-safe overcurrent protection (short circuit protection, etc.) then then IC3B should be connected to a latch circuit which shuts off your series pass MOSFETs and keeps them off until VCC is removed.

If it's meant as a soft overcurrent (i.e. to degrade regulation instead of shutting down completely), move C6 so it's between pin 6 and 7 of IC3B. I'd also get rid of C3 - if the response needs to be slower, you already have delays from R13, C8 and C6 and can adjust those accordingly.

You current feedback looks too linear. Not talking about caps, many of them they seem unnecessary. By linear I mean that your summation of current value and reference voltage will lead to not "current limiting mode" but just noisy feedback. Oscillations is part of this and noises. I'd try 2 things:

You said that this project is for study. If constant current is not a first requirement mode, if it is just supplementary, then my suggestions are valid. But if you decide to redesign it completely to make it perfect, I'd say, look at the design differently.

Consider that you building a perfect current source. Design it completely, then add a voltage limiter feature just by powering U stage with independent I stage. As result you will get near perfect supply with both U and I.

Not the answer you're looking for? Browse other questions tagged operational-amplifier voltage-regulator oscillator feedback linear or ask your own question.