Relationship between base-emitter voltage, base current and collector current 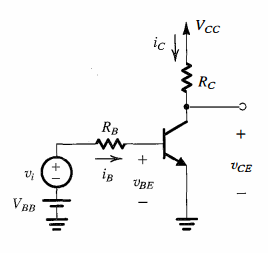 I simulated a circuit with this exact configuration and it shows that \$I_B\propto V_{BE}\$ which is what I expected. Snipping of the oscilloscope's graph. Levels and magnitudes are adjusted just to fit the image, but clearly they are proportional.

What am I missing? Thanks...

I guess the first thing I want to do is to point out that there are several entirely equivalent level-1 DC Ebers-Moll models for the BJT. If you want to skim through them, see my answer to "Why is Vbc absent from bjt equations?", where I list them in some detail. Engineers have generally settled on the non-linear hybrid-\$\pi\$ version, where a linearized version of it is also quite convenient for small-signal analysis.

For some purposes, it doesn't need to get much more complicated than that.

That's the same expression you provide in your question. However, you describe this using an English term "inversely proportional" and then later use the symbol \$\propto\$ when talking about your observations. This is usually taken to mean the multiplicative inverse and not the additive inverse, within the context you provided. I'm pretty sure that you instead meant the additive inverse, though.

But this only means that if the magnitude of \$V_{BE}\$ increases, that it leaves a smaller remaining voltage across \$R_B\$, so the base current declines. But the thing that increases \$V_{BE}\$ (other than lower BJT temperatures) is higher base and collector currents. So, if \$V_{BE}\$ slightly increased for a moment for some reason, then the base current would decline slightly (because of the smaller remaining voltage across \$R_B\$) and this would then lower \$V_{BE}\$ back to where it was. (In that sense, \$R_B\$ provides a stabilizing negative feedback.)

Technically, though, the complete equation (assuming active region of operation for the BJT) is:

If you want to try and mathematically solve the above equation, you can do so using the LambertW function. I show how to solve a similar equation as an answer to "Differential and Multistage Amplifiers(BJT)". It's actually quite straight-forward, once you get used to the relatively simple algebraic manipulation required.

However, most folks don't bother. Instead, they just realize that a \$60\:\textrm{mV}\$ increase in \$V_{BE}\$ will mean a ten-fold increase in the collector current (or base current) and deduce that \$V_{BE}\$ won't change much and can be treated approximately as a constant once it is estimated.

So the above equation instead becomes:

But please feel free to work out the following equation from \$\ref{eq1}\$ above:

It's just modest algebra. (The last term is because of the y-intercept and is likely too small to bother with and can probably be discarded.)

In general you use an estimate for \$V_{BE}\$ during design and just stick with it. And then you take into account that each individual BJT will have slightly different values for the same currents; that your circuit will be used in various weather/climate conditions; and that the circuit will have to deal with varying loads (often); and so you verify that your circuit still operates well regardless of these variations.

Which makes \$\ref{eq3}\$ superfluous, in practice, and explains why you don't see its usage pushed much. It's over-kill (unless you are taking a mathematics course.) So your book uses a rather normal-looking equation. As it should.

10
Why is Vbc absent from bjt equations?
5
Differential and Multistage Amplifiers(BJT)

2
NPN Transistor Analysis: How is collector current determined?
3
Noticed something weird in derivation of relationship between ICBO and ICEO in BJTs
0
Can you find an analytic expression for the (beta)hfe of a BJT?
1
hfe of transistor in active region
8
Stability factors of a voltage divider bias circuit
5
BJT Voltage Divider Bias Circuit problem
5
How to derive the precise gain of an NPN common emitter amplifier without emitter degeneration?
0
Finding current through an LED in an amplifier using a BJT