What formulas can be used to calculate how much volts and current is needed to get a resistor to heat up to a certain temperature?

I need to get a resistor (or a few next to each other - for more heated surface area) to heat up to about 200 degrees Celsius. It needs to be powered via DC power supply, preferably a few AA-alkaline batteries.

Can you please assist in what I need to look for in constructing this?

Energy and temperature are related via heat capacity:

where \$ \Delta T \$ is the temperature rise, \$ \Delta Q\$ the net added(thermal) energy, and \$C\$ the heat capacity. The latter depends on the material(s) and specific heat capacity is a fixed property for a substance per unit mass.

Let's assume the specific heat is comparable to that of ceramic, that's about 1 J/(g K). Then for a 7g wirewound 10W resistor:

ignoring losses to the environment. So you can't say which voltage or power is needed to heat the resistor to 200°C. The small resistor reaches a very high temperature soon, without applying much energy. You'll have to define what thermal energy you need, and then we can talk again.

The 10W resistor referred to can go as high as 250°C as the graph below shows, 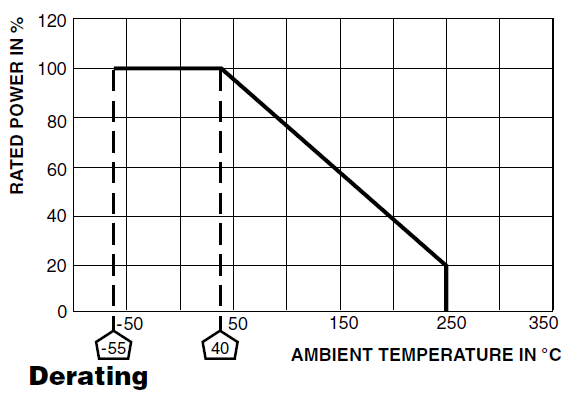 but at high environment temperatures it has to be derated, in this case meaning that it can only dissipate 4W instead of 10W at 200°C. That's because it can exchange less heat with the environment if the temperature difference is smaller.

It's also possible that the environment's temperature also rises. Then the resistor's temperature will follow that rise until the temperature difference is the same again.

The rate at which heat is exchanged depends on the temperature difference and the thermal resistance. The latter is difficult to determine, and is completely depending on how the resistor is placed. You may have to find it experimentally.

There are several facets to your question. First, the power dissipated by a resistor can be expressed different ways. Consider Ohm's law, and you can hopefully see that all these are equivalent:

But that's only part of the problem. The other part is how many Watts you need to reach the desired temperature. That's a lot harder to answer open loop. For a rough guide, look at a datasheet for a representative resistor. This should show you what the thermal resistance to ambient is. Let's say for sake of example only (I haven't looked and this could be wildly off, your job to get the correct numbers) that some surface mount resistor is rated for 100°C/Watt. That means if you want it to be 100°C above ambient, you have to dump 1 W of electrical power into it.

However, that is just a rough guide. The datasheet can't know the particulars of how much copper (which conducts heat well) is connected to the pads, the thermal conductivity of the subtrate, and of course this varies significantly with rate of air flow. For anything other than very rough temperature control, you need temperature feedback. You would mount a thermistor or other temperature sensor in the middle of the array of resistors and a control loop would vary the voltage or current to the resistors to regulate the temperature.

Yet another issue is that 200°C is above the maximum operating temperature of many resistors. Check the datasheet carefully. You also have to consider whatever material these resistors are mounted on and whether it can take 200°C for extended periods of time. All in all this is a rather more complicated problem than may appear at first glance.

I would say you can't heat up a bunch of regular resistors up to 200 degrees Celsius without them literally burning up. A better solution would be to use appropriate material for this, like a resistance used in boilers or electric showers.

Also, feeding a resistance like that with AA-alkaline batteries isn't practical, as you would need a lot of them and they wouldn't last very long (the resistance for heaters is typically very low).

As for the formulas, you'll certainly need the power you are applying to the resistance, which you can derive with \$P=V^2/R\$ and something which relates this power to the heating capacity of the body you are trying to control the temperature (more on this soon... I have to dig my memory a bit and I'm a little short of time right now :) )

5
Heating up a container - most efficient
0
Thermistor temperature dispersion
1
Designing a simple fan + resistor system for heating air
0
What heat sink should I use for this 50W resistor?
2
heat dissipation in watts of equipment in a box
0
Cooling Methods for Voltage Regulators
1
Dump loading chip resistors and heat dissipation
0
how to calculate maximum temperature of wattage on wire?
0
Getting current and voltage on a resistor using simplification