I'm currently going through RF Microelectronics by Razavi. In chapter 3 he presents an example where the following signal is applied to a differential amplifier with a tail current source.

He then decomposed the signal by the following:

His questions is to explain why the output of the differential contains the following and to assume that the differential pair experiences 'hard limiting' (A is large enough to steer Iss to each side):

Part of the solution he explains that "the one with sidebands of identical signs can be viewed as an AM waveform, which due to hard limiting is suppressed at the output. The spectrum with sidebands with opposite signs can be considered an FM waveform, which emerges at the output intact because hard limiting does not affect the zero crossings of the waveform."

My main confusion is why would hard limiting only suppress the AM signal and not the FM signal? They both have identical amplitudes and frequencies (besides one of the sidebands). 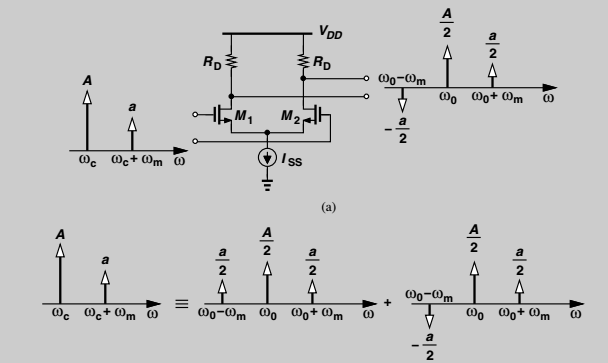 Not an answer, but too big for a comment.

I would consider only the phase modulation of the peak shift and not the zero crossing. This is not a limiter but some soft limiting is occurring if the A is say a hard peak limiting value. So the peaks are shifted early and late by PM not FM. So there are alias sum and difference frequencies but still linear gain and linear phase modulation above A but in opposite directions +/-cos for upper and lower alias or difference frequency.

Due to limiting A cannot be increased but the linear amp now multiplies phase for peak excursions of "a" in opposite directions. So the its power is now split to 1/2 and in opposite phase to the difference frequency as upper and lower sidebands due to peak phase shifting modulation.

Perhaps I am assuming wrong that the limiter action is a hard limiter at inputs above A.

The transfer function of a full limiter is to induce shifting in zero crossings and here the output still has some linear output of say unity gain.

But a hard limiter above some threshold on the output at an equivalent input amplitude A only shifts the peaks. He has rightly ignored harmonics at 2f, 3f etc , but some energy is lost there, so I would expect sidebands of 1/2a amplitude but not main carrier dropping to 1/2.

Also why is gm and Rd not factoring the ouput levels of A now reduced to A/2 . If it were a hard limiter we can get relative sidebands but not absolute A/2 , a/2 levels out deter ined by input. Perhaps he meant this as a relative level with some gain constant k on all spikes out, then zero-crossing mixer analysis would be done.

Examining the sidebands, the phasing is important. AM sidebands must generate amplitude variations only , thus two counter-rotating vectors are the descriptor. The counter-rotation ensures the quadrature energy always cancels.

For PM (phase modulation), the amplitude must be constant and the angle varies, thus 2 vectors rotating in the same direction suffice.

Granted frequency is the derivative of phase (degrees becomes degrees/second), the FM is well modeled as PM for purposes of sideband visualization.

An AM signal is one in which the amplitude is varying with time. After passing through a hard limiter, the amplitude is constant, not time-varying. Thus, the limiter suppresses AM. This is all the author is saying.

An FM signal is one in which frequency is varying with time. The hard limiter has no effect on instantaneous frequency, so the FM modulation passes through the limiter.

I hope this makes sense. I don't think the author is trying to say anything more complicated than this.

Not the answer you're looking for? Browse other questions tagged rf cmos differential or ask your own question.