What is the point of Buffers like this in Programmers?

So this is a schematic for an AVR Programmer seen here: http://www.sparkfun.com/products/9825 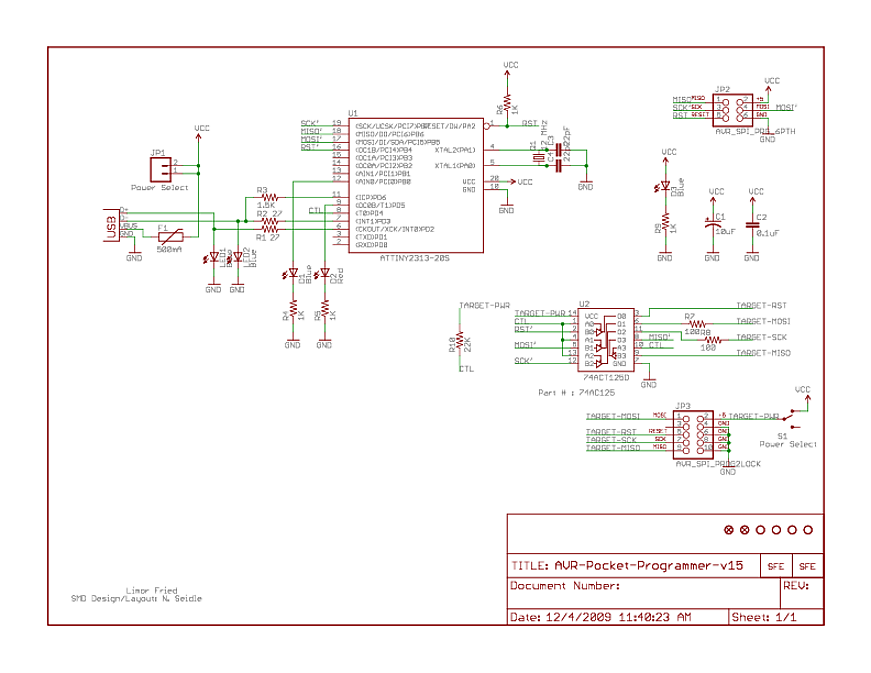 On the bottom you will see a 74AC125 which is a Quad Buffer with Tri-State Outputs. I've seen quite a few buffers like this on programmers.....but im not exactly sure what they do? Im assuming whatever "CTL" is controls the "state" of the buffers.....but what exactly is the point? Why can't you wire it directly to whatever Port Line (Serial or w/e). Or does this have something to do with Impedance (Which Im not sure I STILL quite understand).

Is it because the Signals are coming out of the ATTINY2313 (or w/e MC is used) too fast and they need to be slowed down? I see this often when using a USB port of Serial Line....that one of these "Buffers" is used. What would happen if it wasn't there?

Or is this all just some sort of Serial Protocol Im guessing?

First, there's no need to assume anything. It's extremely easy to find a datasheet for this sort of part.

Generally, a bus buffer like the 74AC125 is used for improving drive capability. Some micros cannot source high current from their digital outputs, and need a buffer to effectively drive their loads.

Buffers can also be used for logic level shifting - your micro may be a 3.3V part, and your external logic may need 5V logic levels. A buffer takes care of this translation for you - the buffer can be powered from the higher rail, so that a 3.3V H input becomes a 5V H output.

A buffer also protects the digital output lines of the micro from external 'badness' (short circuits) - even though most micros do protect their I/O lines, it's much easier replacing a buffer IC than it is to replace and reprogram a micro.

In terms of delays, the buffer isn't like a memory buffer in the computing realm - it doesn't inherently store data so that it can be transmitted more slowly. It does introduce a propagation delay, so the output signal is delayed in time compared with the input signal (but at the same data rate) - a phase delay instead of a baud rate reduction, so to speak.

The other use is to enable or disable the output to the programming header. In order for programming to work, the programmer's microcontroller needs to sink current on the pin connected to the CTL line. What this allows us is to use the JP2 connector to work with programmer's microcontroller and since signals are shared between JP2 and JP3, the buffer allows us to use JP2 and not interfere with JP3 while using it.

In this particular application, the 74ACT125 buffer provides logic level shifting. One side of the buffer is connected to MCU in the programmer (running at 5 V levels) and the other side of the buffer (and the VCC of the buffer) is connected to the cable leading to the target board. Some target boards run at 5 V, other target boards run at 3 V levels. (The 74ACT125 seems to be running slightly out of specification in this application -- I'm not sure why the designer didn't pick an alternatives such as the 74HC4050, TXB0104, or 74LVCC4245 ).