I built and simulated this BJT current buffer for an opamp based on examples I found in various places online: 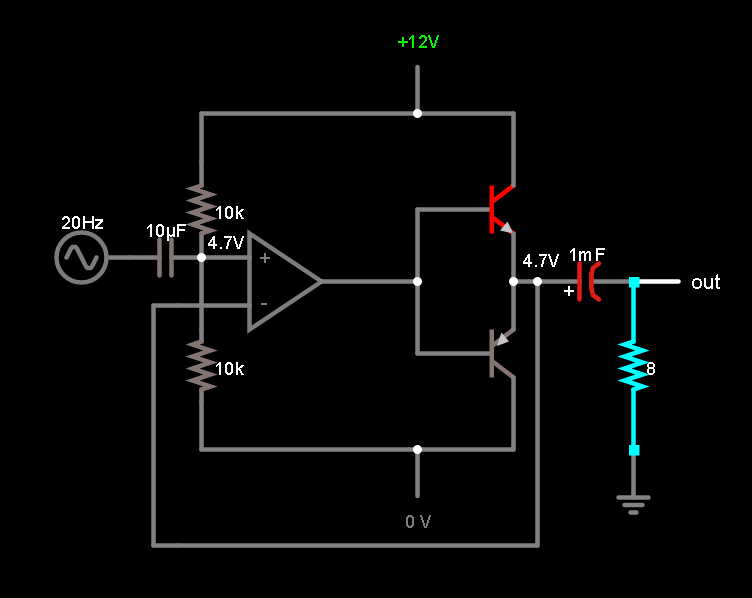 Link to simulation of above schematic

What alterations would need to be done to make this a functional circuit in practice?

EDIT: Goal is to drive a speaker with AC signals (20Hz-20kHz). Total power output of 1/4W. OpAmp in question is an NE5532. I don't have LM386s on hand and they are not unity-gain stable anyways. Yes there are monolithic solutions, but this is partly a design exercise and partly a challenge to make do with parts I have on hand.

EDIT: If I diode-bias the bases like this: will I get suitable audio performance? It doesn't need to be exactly hi-fi quality, just not noticeably distorted. 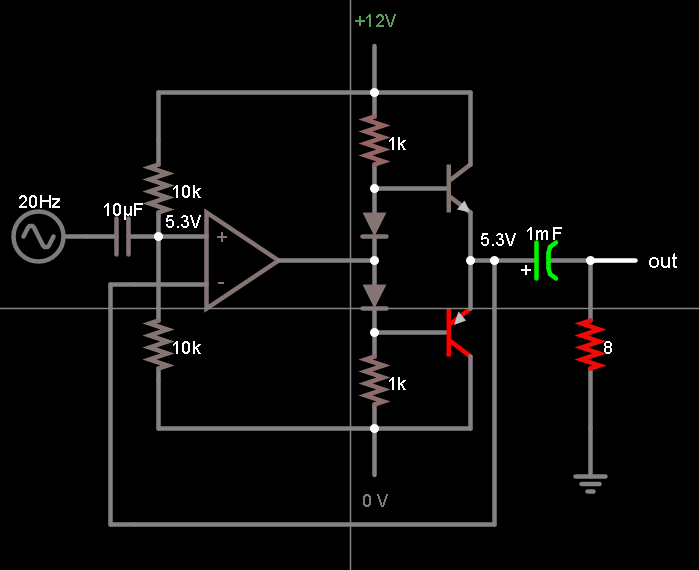 Let's start at the given output driver topology: 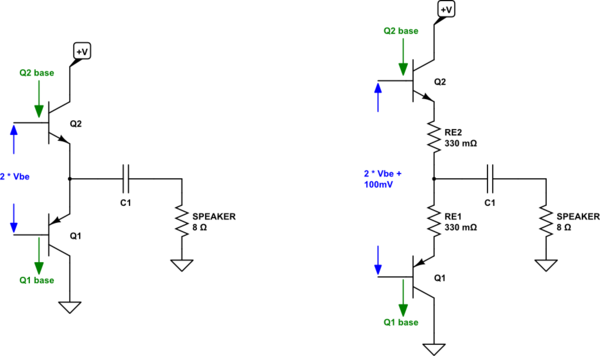 On the left is the basic idea, but it is worth some discussion already.

\$C_1\$ exists, in part, because a speaker is a complicated device and doesn't entirely enjoy an average DC current flowing through it and because you aren't using a bipolar power supply. So \$C_1\$ exists, in small part, to block DC currents. In use, it will soon charge up to an appropriate average voltage across it so that the average current centers around zero. The speaker is complex, but for these purposes (low power, etc), other than justifying an output capacitor, we can just lump it out the way, as you did, and move on.

To avoid most of the cross-over distortion, you want both \$Q_1\$ and \$Q_2\$ to always be (close to) active. So as an initial guess, you probably want two \$V_{BE}\$ separating the base voltages between the two BJTs.

Now, look to the right side. I've added some emitter degeneration (which helps for several reasons.) A lot has been written about this and I've read some. I won't try and replace the discussions by professionals in this area. But suffice it that if you set the voltage drop across these resistors to around \$60\:\textrm{mV}\$ or so at the expected RMS current, you are close enough to optimal for hobbyist work. (A professional producing a commercial product would anguish over this whole single detail a lot more than I'm going to.) Given that you want \$\frac{1}{4}\:\textrm{W}\$ into \$8\:\Omega\$, this means you have \$\approx 180\:\textrm{mA}_\textrm{RMS}\$. From this, I get pretty close to the resistor values you see there on the right side. All this really means is that you might need just a little bit more voltage between the bases. Best to plan on making some room for it, though.

At this point the question is how are you going to actually drive those two BJTs. The simple approach is to just use "diodes" somehow. Of course, if you go that way, you will need to supply them enough current that they develop the voltage you want to have. It would be better to use a constant current because that would provide a nearly constant voltage across them (assuming their temperature doesn't drift around a lot.)

But since you want this as a learning lesson, the next thing to consider is an adjustable \$V_{BE}\$ multiplier. These are worth learning about and they are not expensive or difficult. 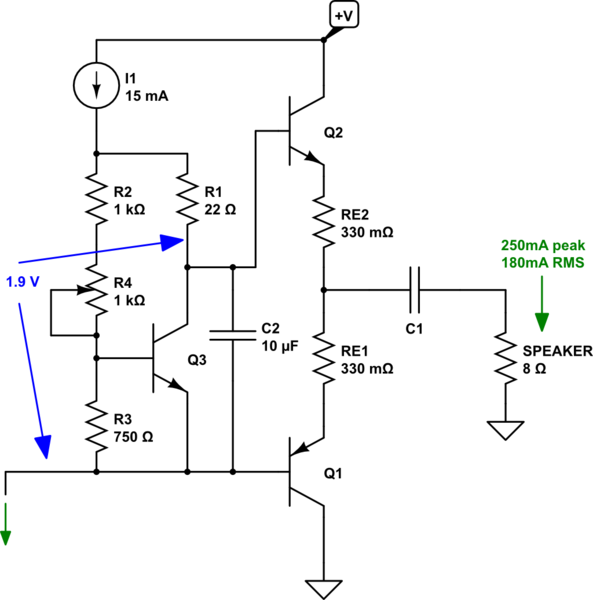 I've designed the above \$V_{BE}\$ multiplier based upon the idea that there will be something like \$\frac{250\:\textrm{mA}}{\beta=100}=2.5\:\textrm{mA}\$ peak base drive current needed for \$Q_1\$ or \$Q_2\$. The \$15\:\textrm{mA}\$ current source at the top represents something we need to worry about, later. For now, just assume it exists. The unconnected lead at the bottom will have to sink this current somehow (or the portion of it that isn't used for base drive, anyway.) I decided to pick \$14\:\textrm{mA}\$ as the "nominal" design current for the multiplier.

By the way, the \$1.9\:\textrm{V}\$ isn't cast in concrete. The actual value you want will vary a bit because discrete BJTs for \$Q_1\$ and \$Q_2\$ vary a bit. Make it too big and you will waste unnecessary power. Make it too small and you will hear the cross-over distortion.

\$R_1\$ is there to correct for the incremental resistance and the Early Effect. I won't belabor how that gets calculated, unless you ask. That value might be "good" somewhere between \$10\:\Omega\$ to about \$33\:\Omega\$.

Now you need to supply a current source. This can be done with a current mirror. But a much "cheaper" technique uses bootstrapping from \$C_1\$. The new arrangement is: 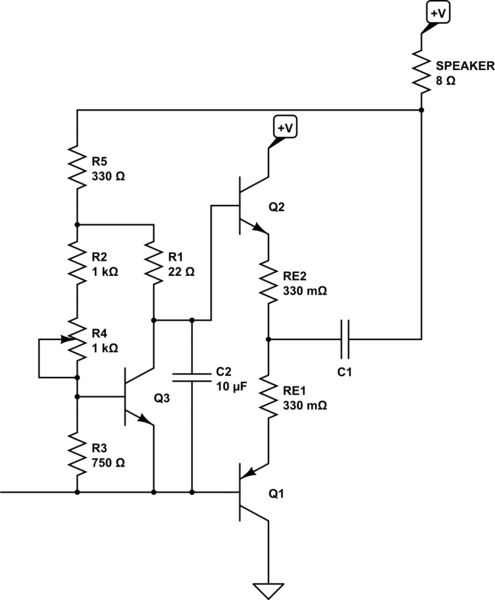 At this point, you have the makings of a cheap hobbyist quality output driver for your speaker.

The output of your NE5532 isn't guaranteed to be more than about \$10\:\textrm{mA}\$ (worst case and into a dead short.) So let's reduce the current source above to about \$6\:\textrm{mA}\$ ... and plan on letting that work out. (Won't be nearly so stiff, but probably acceptable for your case?) 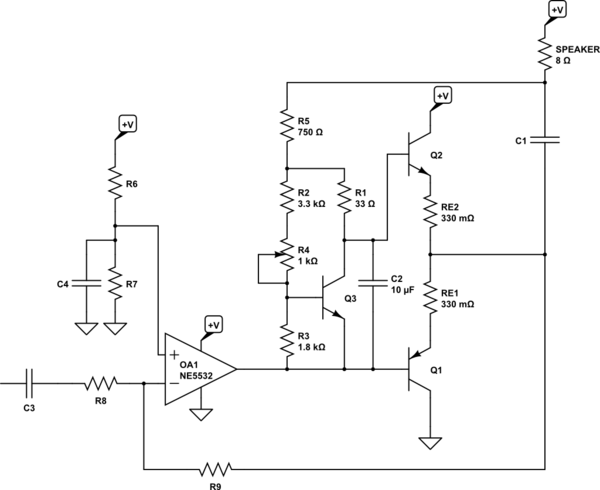 That's about it. Make \$C_1\$ huge, though. Add bypass capacitors where you think appropriate. Build that and play with the value of \$R_4\$. It should be about right with the wiper in the mid-range position.

I'd added \$C_2\$ to help stabilize the \$V_{BE}\$ multiplier section, earlier. But there are problems with capacitors (such as, it takes time for them to charge up.) You can dump the capacitor and get nearly as good a performance (voltage stability vs current changes) by adding yet another BJT. 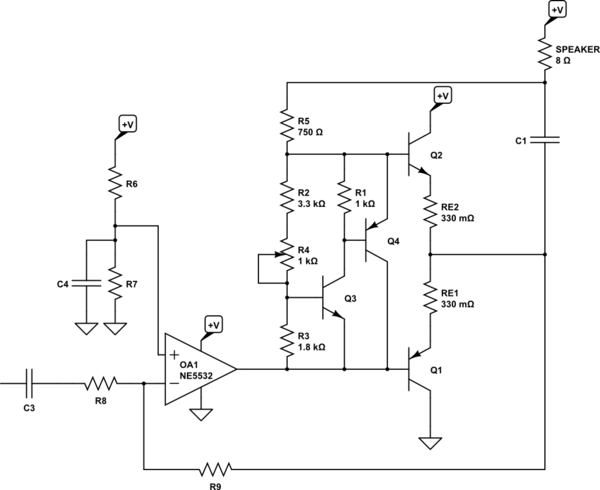 That's another approach (one I actually kind of prefer.)

I've barely scratched the idea of thermal management. I'll address it in a moment, after making a few points.

Let's work out an estimate of wasted power, just as a very rough back of envelope calculation.

The whole thing ceases to work quite like it was designed.

One approach is to couple the \$V_{BE}\$ multipler to the driver BJTs, thermally, because the multiplier's \$V_{BE}\$ will also vary and so therefore also will it's final voltage across it. Another approach in this case might be to choose TO-220 BJTs for your output stage because they have MUCH BETTER thermal resistance and their temperature change will be much less. Heat-sinks are good, as well. Anything to reduce the change in temperature is good. Or else just accept the change and create a thermal design as part of your circuit.

Or... easier... use a smaller voltage rail and a better opamp. Here, you might get away with about half the dissipation in each BJT.

As you can see, even in the case of a simple quarter-watt output stage, there are a lot of considerations in making something that "just works right."

Yes it will work.

Will it be any good? Nope.

The problem with this circuit is around the "zero crossings" which are not at 0 Volt in your circuit but around 6 V since you're using a 12 V supply.

At the switching point there's a moment when both transistors are off and this results in crossover distortion.

The solution is to take care that some current always flows through both transistors. A class AB stage has this.

Here's a typical example of a class AB stage:

Bandwidth and crossover distortion is not the issue with unity loop voltage gain.

The GBW os 10 MHz so you can raise the gain from 1 to 100 easily with R negative feedback ratio.

The ratio of 600/8 ohms implies base current gain of 75 but if the bias current is 15mA your Op Amp will be wasting most its current capacity into the DC bias with AC swing.

Consider Op Amp current limit of 30mA is possible, but still you need more hFE at all times, which isnt going to happen.

There are finer details for lowest distortion, but this is a must have if you need more than Vcc=9V

Whether the class-B stage you propose is a good choice depends entirely on the application.

When the output current changes sign, the opamp will have to slew to turn on the other transistor, as you mention. So it will generate a large amount of crossover distortion.

For driving a DC voltage into a load, it will be absolutely fine.

For audio, it would sound like crap: since audio signals spends most of their time near zero amplitude, any discontinuity near zero is a deal breaker. If the signal is small enough, but still keeps changing sign, because it's AC, this simple design can end up with more distortion than signal...

For driving AC signals into a load, that'd depend on the frequency and the allowable amount of distortion.

Bimpelrekkie gave an example, I'll give a counter-example, where the opamp's supply current is used to drive a pair of darlingtons. This is a bit ugly.

Honestly, the simplest solution for you is to use something like a LM1875, LM3886 or TDA2030 which are very cheap and capable power opamps.

There is also TDA7294 but its protection is a bit less smart (I had one burst into flames on a short) and I prefer the sound of the LM parts.

Now if you want to know what I use to drive AC current into stuff? An old crusty audio amp I got at a garage sale for €20. It has plenty of nice features like: an enclosure, not having to build it, got it for cheaper than the heat sink or the transformer, a volume knob... very useful ;)

Indeed it can't. The rate at which the opamp output can charge is the slew rate. For example the LM358 has a slew rate of about 0.5V/us, so it would take about 3 microseconds to swing through the crossover region.

Many opamps internally suffer from crossover distortion as well, which should be clear when you look at the equivalent schematic and see a class B amplifier for the output 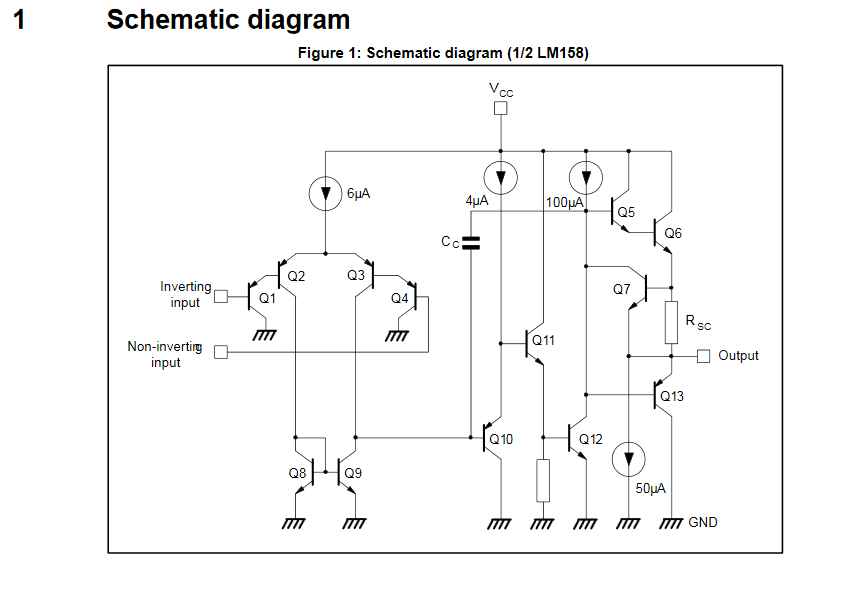 Not the answer you're looking for? Browse other questions tagged operational-amplifier bjt circuit-design buffer class-b-amplifier or ask your own question.