I'm currently trying to reverse engineer a remote in my headphones (one of these three button things). The remote seems to work fine, but the mic is intermittent - at times it will work perfectly, at other times it will go completely silent.

In order to proceed further in trying to figure out what the mystery IC is doing, I need to figure out what microphone is being used so that I can identify the connections. All I know is it's an SMD mic with all pads underneath the chip so I can't trace them easily. 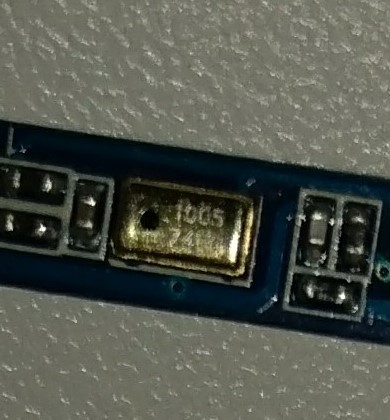 Above is a photo of the microphone (apologies for the poor quality, I'll try for a better one later). I'm pretty sure that it must be an electret one as there are no inductors/filters anywhere that could otherwise create a supply for a MEMS microphone given that the whole controller is powered via a bias resistor embedded in the phone. (*)

The markings are as follows:

The overall dimensions are roughly 4mm x 2.4mm x 1.1mm give or take. The black dot is the microphone membrane itself (so entry is on top).

The output of the mic is analogue not digital and seems to be on the order of a few millivolts.

A cursory Google search returned nothing, so I'm opening the floor for suggestions.

Again, the aim of this question is simply to identify the part.

(*) This is for an Android phone typically a 2.2V ish supply with a 2.2k or 5k series resistor (depends on which spec you read).

For those that want some background:

In terms of an overall picture of the circuit, as I say it's a 3-button remote in a set of headphones for controlling a mobile phone. The remote is supposedly both for Android and iPhone, but doesn't behave correctly. Initially on connection the mic works fine, but as soon as any button is pressed the mic will subsequently go silent until the whole thing is disconnected for a while.

My best guess at this is that my phone is an edge case that doesn't work properly with the way they have designed the controls - iPhones and Android use different signalling schemes so they seem to have some extra circuitry involved to switch between them. I am trying to work out the various connections so that I can start modifications to suit the Android spec.

Below is the schematic that I have thus far deduced. Again it is not possible to complete because I cannot physically see or measure what connections are beneath the microphone. In the schematic in the red box I've drawn the routing to match the physical layout as pictured in the photo. 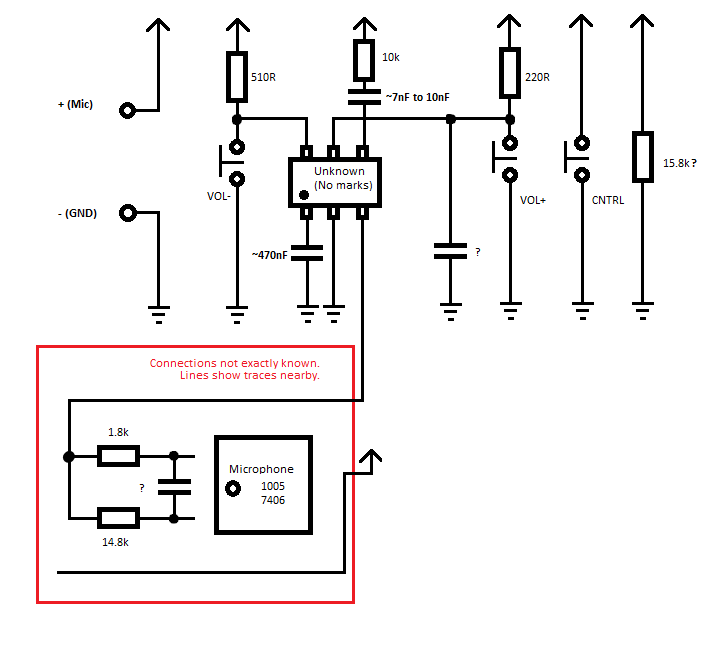 Of interesting note the voltage at the input is never more than 1.4V. When it is working correctly (i.e. mic can be heard) the voltage is about 1.06V. When the mic can't be heard it has jumped to 1.4V.

Pin 3 of the unknown 6-pin IC is sitting at 1.4V when the mic is not working. When it is working this voltage drops to near 0V. Beyond that it is hard to get an idea of what is going on from the voltages as the rest of the pins seem to be roughly the supply voltage with the exception of pin 1 which is sometimes 0 and other times floats up to 0.4V ish.

The voltage at the phone input when buttons are pressed are as expected - roughly 300mV for VOL-, 150mV for VOL+ and 0V for CNTRL. From what I can assume the unknown IC is probably some form of multiplexer, but there is no information marked on the chip.

But to be honest the aim is to simply identify the connections to the microphone after which I am planning to remove the mystery IC entirely and find a way to wire in the mic correctly.

Simply removed the mystery IC and shorted pins 2 and 3 of it to ground (the mic was working previously when pin 3 was 0V). As if by magic everything works.

I'm going to leave this as an unaccepted answer because it doesn't answer the main part of the original question which was to identify the microphone.

not same but similar

Since these companies cater to only large OEM's with 10k min MQO signing NDA's for specs. (minimum quantity order and non-disclosure agreement)

Assume they are not available and you have 2 or 3 connections. 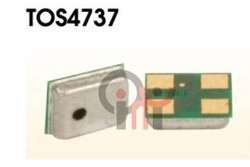 Reverse engineering requires a scope trace, acoustic problem description and at least a plan on how you think you can improve this.

If this is what I think it is...based on many web complaints of design quality failures, I have to suggest that you stay away from the V-MODA Vibrato Remote Headphones right now, and look to a different company when you want a new pair of headphones.

But by all means document the problem and request an RMA replacement ASAP.

Although I was going to suggest the solution the Op gave in answer. The question was flawed. The problem surround the transient effects of disconnecting BT and not the analog audio , its output or its specs or the lack of part number ID source.

FYI this is how some designs work to use analog DC steps to encode mic volume +/- increments in an ASIC based on an Android standard. 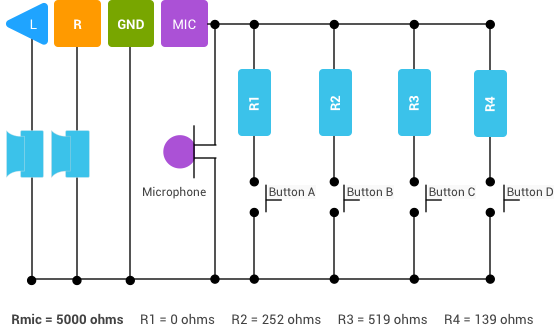 Not the answer you're looking for? Browse other questions tagged identification microphone or ask your own question.

13
Electronic aspects of iPhone 3.5mm audio output
3
Join the microphone and audio lines from a headset for recording
14
Digital data coming out of a cell phone headset mic?
2
How to using a 3.5 mm stereo plug mic with a EM11G LM 386N-1 amplifier
3
Speaker out (from laptop) to Mic in (Mobile phones)
0
Force microphone on TRRS connector without a mic connected
0
Multimedia switch - audio - MIC bias
0
Linking Android phone to motorcycle helmet comm set
4
Device to loopback mic to headphones
0
Creating a custom TRRS splitter for headphones and mic; how to handle the mic's TRS jack?