I am a newbie and I am trying to understand how particular register (in lpc1347) works. Maybe it's common problem, maybe it's specific to lpc boards. I'd like to learn how GPIO and PININT register works, so I have started learn lpc1347 manual, but I am stucked in point while changing GPIO register. Let's take, for example GPIO register called NOT, which toggle a pin to opposite state. I can modify it in two ways:

NOTE: Both of them works correctly. The first way is called (surely) read-modify-write, because I must read NOT register, make OR operation and save it. The second way is to save pin mask directly. I have made a simple research and LPCOpen use the second way:

Of course there are several registers in the GPIO that I have to modify with OR/AND masks...My question is How do I know when I don't have to make RMW operation and modify register directly? I have searched in the manual, but I didn't find any mention how to distinguish it. Is it any recipe how to do it properly? Should manual tell me the truth or this is general knowledge how to distinguish it?

There is no single method to be used; it all depends on your application. If you want to set a value directly and previous value is not useful, you assign directly because it is faster.

You need to do RMW when you want to preserve part of the previous value. Say you have a 32 bits register where each bit is state of a GPIO (output 1 or 0). If you want to modify only bit 0 you will use RMW such as:

As you can see, using RMW, you can keep previous state of other bits if you want. Therefore if if you to create different independent modules, you can use RMW to modify your bits without have to care about the state of bits being set by other modules in your code. Using RMW is a little bit slower than direct assignment, though.

To answer your question directly: both are RMW. One is software implemented (first) and the other is hardware implemented. You should use hardware whenever possible. On your chip this is available. On lower end hardware you would have to use the software technique.

How do I know when I don't have to make RMW operation and modify register directly? I have searched in the manual, but I didn't find any mention how to distinguish it. Is it any recipe how to do it properly? Should manual tell me the truth or this is general knowledge how to distinguish it? 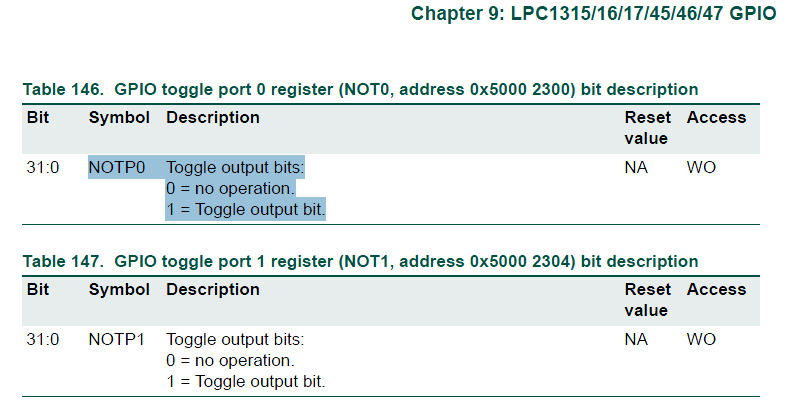 These two particular registers (as well as others) also marked as write only. Performing a software read-modify-write would be just a waste of time. The compiler does not know that the location is write only, therefore it will actually make a useless read (which will be presumably 0), because also NOT[0] is correctly defined as "volatile".

EDIT: @Chris Stratton suggested that actually the read operation of a write-only register could yield any garbage (unless the manual states that the microcontroller implements a "0 results on read of write-only registers"). This could be indeed very dangerous, because that result will be used to compute the actual write value.

Not the answer you're looking for? Browse other questions tagged lpc or ask your own question.