A confusion about the formula for transistor Vbe Ic characterisitcs

Below is NPN BJT transistor Vbe Ic characteristics and the formula: 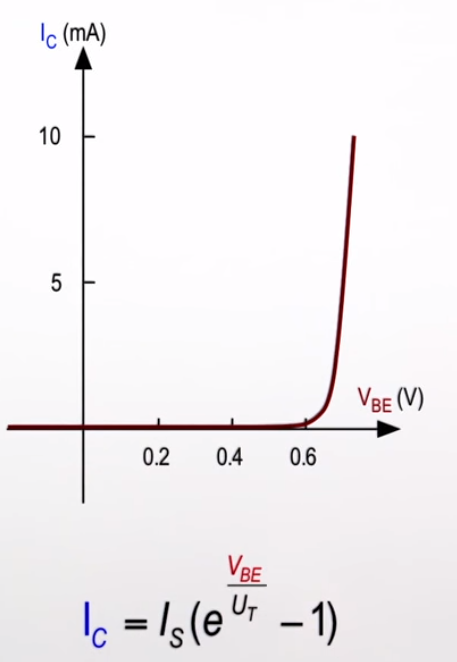 Many texts approximate this equation as:

and following this they say when Vbe=0, Ic becomes equal to Is.

But in real the equation is:

And in this case when Vbe is set to zero Ic becomes zero.

Even for a value very close to zero, the approximation works well because the exponential term grows much larger than 1.

Obviously, the original equation, \$I_c=I_s(e^{\frac{V_{be}}{V_t}}-1)\$ will always work and will give you the exact result (If \$V_{be}\$ were exactly zero, this is the one you want to use because the exponential term no longer dominates).

The approximation is valid when \$V_{be}\$ is such that the exponential term dominates, which is the case even for even a minuscule value of \$V_{be}\$, i.e 75mV.

A BJT is obviously more complicated than your equation(s) provide. But those equations are often good enough when just considering the forward active region. To get a feel for the simplest DC model that was developed, see my answer to Why is Vbc absent from bjt equations?. Today, the term \$I_S\$ is usually implied to take on the meaning used in the Ebers-Moll model called the "non-linear hybrid-\$\pi\$" (though it could also mean the one used in the transport model, too.)

There is a physical meaning for the saturation current. But discussing that is beyond the scope here. Probably the best reading on that topic would be to first read:

and then to read:

You asked in a commment:

The answer to this depends on the model, if you are focused upon modeling. If you are interested in a physical meaning, then review the two papers I just mentioned.

How is it measured?

This is quite a bit easier to answer, for the non-linear hybrid-\$\pi\$ model's use of \$I_S\$. It's very easy to understand, too.

Take a few measurements of your BJT, where you set \$V_{CE}=V_{BE}\$ (without actually shorting the collector to the base!) Then just take out some graph paper and plot the logarithm of the collector current at these several measurement points, against the voltage \$V_{BE}=V_{CE}\$. Draw a line with a ruler back to the y-axis. That value at the y-axis is then the logarithm of the saturation current.

Or just look at the following (Figure 2.15 from Ian Getreu's "Modeling The Bipolar Transistor") and focus on the curve for \$I_C\$: 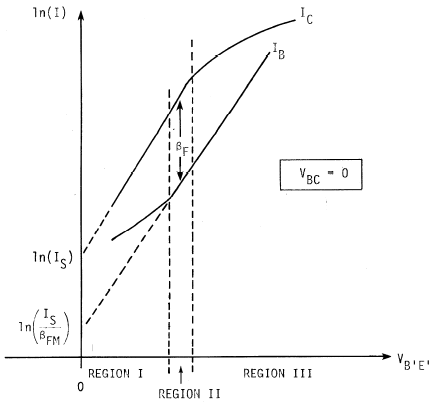 That picture should make it pretty clear. It's just an extrapolation back to the y-axis intercept. (Well, for modeling purposes. Not for physical meaning.)

Of course, the collector current isn't actually \$I_S\$ when \$V_{BE}=0\:\textrm{V}\$. And while the logarithm of the collector current actually does follow a fairly linear line over quite a range, if you zoomed up really close as the base-emitter voltage neared to zero you'd see that it deviates when the base-emitter voltage is nearly zero volts.

But out in the area where most practical measurements are made, it looks just like a single exponential curve (or on a log-chart, like a line.) And this extrapolates back to the y-axis at \$I_S\$.

To fix-up the equation, they just subtract \$I_S\$ from the exponential curve and this action moves the curve downward just perfectly enough so that it intersects the graph exactly at the origin.

You never actually observe the model parameter \$I_S\$, directly. You infer it by making measurements elsewhere and then extrapolating backward.

So that's the answer to how it is measured.

As sstrobe mentioned in comments below this answer, \$I_S\$ is really \$I_S\left(T\right)\$. It's a very strong function of temperature. So strong, in fact, that it completely overwhelms the Shockley equation's temperature dependence and reverses the sign of the change of \$V_{BE}\$ with respect to temperature!!

Here's an example of the dependence of \$I_S\$ on temperature:

Note that \$E_g\$ is the effective energy gap (in eV) and \$k\$ is Boltzmann's constant (in appropriate units.) \$T_{nom}\$ is the temperature at which the equation was calibrated, of course, and \$I_{S_{T_{nom}}}\$ is the extrapolated saturation current at that calibration temperature.

Not the answer you're looking for? Browse other questions tagged current bjt saturation or ask your own question.

26
Basic diode question about voltage-drop
9
Why is Vbc absent from bjt equations?
5
How to derive the precise gain of an NPN common emitter amplifier without emitter degeneration?
5
Temperature coefficient of diode
1
How to measure the inverse saturation current of a diode?
0
Intuitive way to think of transistor saturation current?
0
Reverse Saturation Current of BJT

3
A question on Vb Ic characteristics of an NPN transistor
3
Confusion about a basic BJT current mirror
6
How is Early effect of a BJT minimized during its construction?
0
Formula for BJT common emitter output characteristics curve
2
What is the real problem with fixed point bias circuit?
5
Operation of BJT with low values of Vbe (“cutoff” region)
3
What part of Ebers-Moll equation shows the decrease of the collector current in saturation region
0
Question about Vbe and operation regions of BJT
1
Remedy for pulling the output to ground in saturation?