How to combine and protect two 12V automotive signals into one?

In the below circuit, the DC component (6V) of a bridged car head unit speaker wire turns on a LM53601 buck converter. The LM53601 accepts voltages up to 42V. The +12V input into Q2 is protected to withstand the pulses described in ISO 7637. I have used this circuit in my car for some months now, and it works fine.

But now I want to extend the functionality so that the LM53601 is turned on either with the +6V speaker signal or when the ignition is turned on. The EN signal of the LM53601 accepts up to 42V, but I believe that I will have to protect this input for the pulses of ISO 7637 as well. My proposed solution is shown in blue where I suggest to use TVS-diodes and a reverse polarity diode. This seems like an overkill solution to me, but I have not found any other way to protect the input.

My question is regarding Q2. Should I put a diode (STPS2200U) or a resistor (or both) in the point where I have drawn a red arrow? The 3906 PNP transistor specifications are listed below.

Update: The transient protection circuitry was taken from a TI reference design using a similar buck converter that has the same voltage input range (see below). This passed ISO 7637 testing so that is why I thought it was smart to use the same design. The design uses a smart diode controller (LM74610) for reverse polarity protection, but I have used a 200V Schottky instead which I believe should be ok. 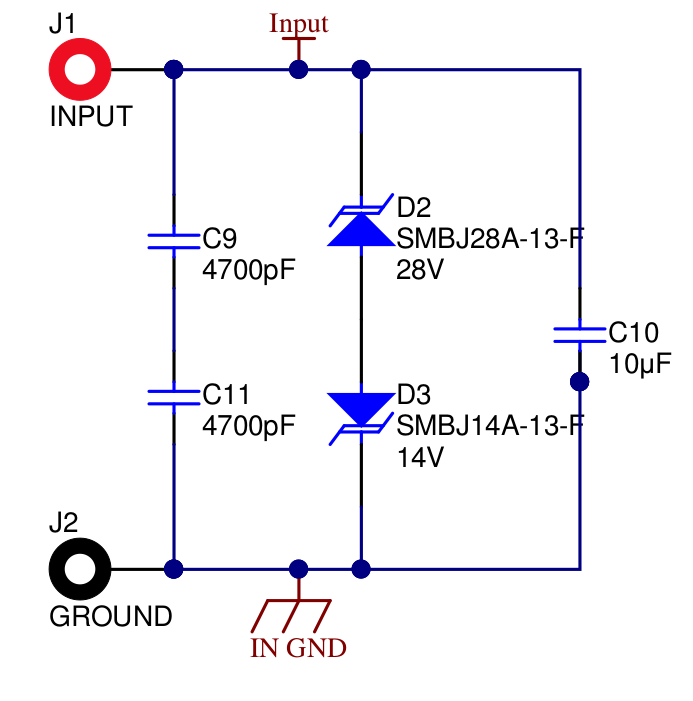 Q2 is effectively a diode already so no additional diode is required.

I'm not too convinced about the clamping circuit though and I don't see a pull down on that enable line so it's effectively floating when off which is a no-no according to the data sheet.

I think I'd build it something like this instead. D1 ensures the enable can't wander above the power rail and R1 limits the current through that wire if it does. R2 pulls the enable low when everything else is off.

Not sure why you need C1 though. It will cause a significant delay on disable, especially at 10uF. 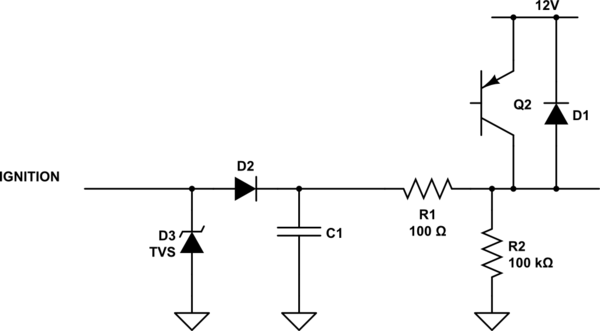 ADDITION: For reverse battery protection too, this is probably better. 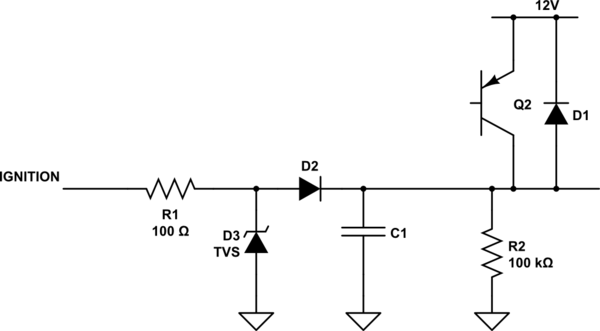 Not the answer you're looking for? Browse other questions tagged circuit-design automotive circuit-protection surge-protection tvs or ask your own question.

2
Reverse Polarity & Load Dump Protection (TVS)
0
How to protect the enable signal (EN) of a car battery powered device?
0
Help understanding voltage limits in a PNP transistor
6
How to protect input against both ESD and reverse polarity?
1
ISO 7637 Supply Transient pulses - Explanation
2
Difference between placing unidirectional TVS diode before fuse or after P mosfet
0
Is using a TVS diode better than using a parallel reverse-polarity protection silicon diode?
0
How to protect reverse polarized when there are two different power sources