I am currently trying to build a DIY analog synthesizer. I've looked at a lot of different designs and I am quite stuck on understanding how some exponential amplifier designs work.

In analog synthesizers an exponential amplifier based on a BJT transistor differential pair is used most commonly. The problem is it's thermal stability. While most of the effects cancel by using a differential pair, an effect related to the thermal dependence in the Ebers-Moll equation will be still present. A solution that I understand completely is using a tempco resistor, just as shown on the first image.

However, I've seen also an another solution (in Arturia minibrute, for example) that I do not understand at all. It is shown on the second image - the exponential amp without the tempco resistor next to R5 is on the left and a weird "thermal stabilisation" part is on the right.

The question is: how does it work? I don't see any connections with the left part at all beside the fact that all of the transistors shown are on a same CA3046 chip.

And which solution will be more stable? 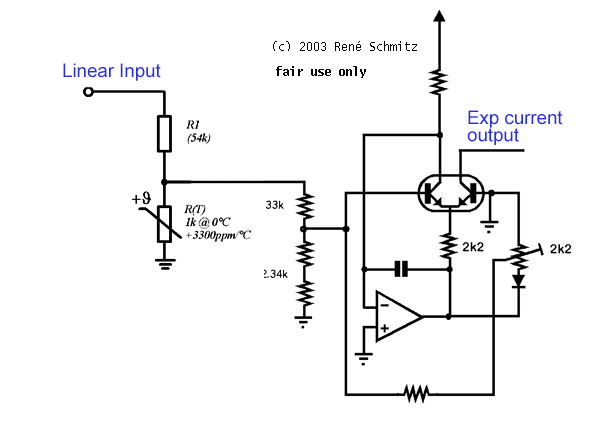 As far as I'm aware there are 3 ways of compensating for the temperature drift of an exponential converter.

It looks like the "stabilisation thermique" circuit is actually a temperature regulator - it dissipates power in the CA3046 to heat it up and servo the IC to a specific temperature! Since the temperature sensor transistor / heater transistor / VCO transistors are all (ideally) thermally coupled, this temperature compensates the VCO core. I've heard this type of technique called an oven controller, and you sometimes see it on test equipment with a high-accuracy frequency reference where the crystal is temperature regulated in a similar manner.

To see why I reached this conclusion, take a look at that thermal circuit. The servo loop inputs are (1) a reference voltage derived from the 12V supply and (2) the Vbe of a transistor. The only feedback path I can see is the thermal one. Now consider what happens to the loop if you magically put it in an initial state where the Vbe of the sensor transistor (connected to pins 6-8) is too high. The op-amp output will rise, the heater BJT (on pins 9-11) will run more current and dissipate more power, the transistor array will heat up, and the Vbe of the NPN 6-8 will go down (Vbe is CTAT).

There are a few limitations to this technique. Obviously, it won't work above some critical ambient temperature. To cover a larger range of ambient temperatures requires higher power dissipation. The technique also depends on the thermal coupling between the NPNs in the matched array chip. If each of the devices is distributed across the die and interspersed one with another, then thermal matching between e.g. the sensor NPN and the VCO NPNs (not to mention the dTemp introduced between the VCO NPNs themselves!) could be very good.

I designed an anti-log (exponential) voltage converter for my H-P 3581A Frequency Analyzer so that the frequency scanning would be "logarithmic" as well as linear. I used the CA3046 (CA3146) as an "oven temperature controller". I used 2 transistors (pins 6-7-8 and 9-10-11) as the heaters and the substrate transistor (pins 12-13-14, pin 13 is Sub.) as the sensor. The amplifier array is an LM124A (MIL grade). The circuit values are slightly different because the V/decade output is different (0.5V/dec over 1Hz to 50kHz). All voltages are produced using LM317L voltage regulators. HLMP-4700 LEDs help stabilize the heater transistor B-E voltage and reverse voltage protection uses a 1N914 as in the example circuit. The supply voltages in the 3581A are + & -10V. Warmup is rapid and stabilization takes about 5secs. Long and short-term stability are excellent. I am a retired Nat.Semi. Apps Engr. with over 40 years experience.

Not the answer you're looking for? Browse other questions tagged transistors amplifier thermal synthesizer or ask your own question.

4
Voltage Controlled Second Order Low Pass Filter
2
Input stage of a current mirror circuit
1
Drive LEDs in a bar from an amplifier output?
1
Series-shunt feedback analysis
2
Thermal Management for Arcol HS50/HS100 50/100W Wirewound resistors
52
Why does music synthesizer built from chain of astable multivibrator circuits get "out-of-tune" after a few hours?
9
How does this transistor (pre-)amplifier work?
7
Why can't this circuit amplify the oscillator signal?
5
A simple analog neural network to implement the XOR operation