I'm an undergraduate member of a research team working on a project that involves an RF-transmitting ASIC, and its wireless receiver which should ultimately send data to a PC.

The receiver outputs a fast, continuous, asynchronous, non-standard serial signal (i.e. not SPI, I2C, UART, etc) so my job is to write microcontroller software to interface the receiver to the computer. Currently my approach is to use edge-triggered interrupts to place the data in a circular buffer and do the whole bit-by-bit decoding process in the main loop. The microcontroller must simultaneously output this data using USB (virtual com port) to the computer.

Here is a problem I'm having, and one I'm anticipating:

So the question is simply, what might one do to resolve these issues or is this not the right approach at all? I'm willing to consider less software-centric approaches as well. For example, using a dedicated USB chip with some kind of hardware state machine for the decoding, but this is unfamiliar territory.

People jump to use interrupts too easily. Personally, I rarely use them because they actually waste a lot of time, as you are discovering.

It's often possible to write a main loop which polls everything so rapidly that's it's latency is within spec, and very little time is wasted.

There might be some things in the loop which happen far more often than others. Perhaps the incoming bits for example, in which case, add more of those tests, so that more of the processor is dedicated to that task.

There might be some events for which the latency of this approach is too high. For example, you might need a very accurately timed event. In which case, have that event on interrupt, and have everything else in the loop.

Easy: Use a PSoC5 Microcontroller. 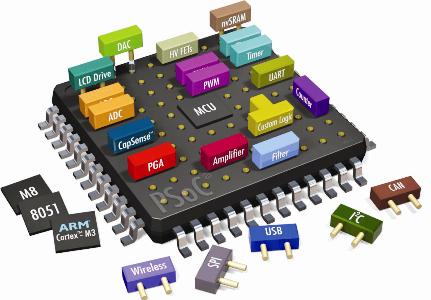 You have all the ease of use of a microcontroller, plus it contains a CPLD, so you can write your own hardware peripherals in Verilog. Just write your serial data decoder in verilog, and use DMA to stream it to the USB port.

Meanwhile, the powerful 32-bit ARM core can be twiddling its Thumb instrutions.

You could possibly use an FPGA instead of a Microcontroller to decode and buffer the wireless datastream. Then use the ARM processor to flush the FPGAs buffers (e.g. using a SPI interface) and ship the content out the USB Comm port. It's work, but an FPGA should be able to keep up easily so long as you are able to service it often enough to guarantee that its hardware buffers don't overrun (or if you can deal with dropped data at a higher level of the protocol).

I think you have a classic engineering choice to make: fast, cheap, works: pick two.

@vicatcu's solution is certainly a good one, but if you can't or won't add more hardware to it (and this includes a faster processor) then you have to make a choice. If this serial link is the most important than you should sit in the ISR until all bits have been collected. 180 instructions per bit is actually not bad at all, but don't try to do everything. When you detect the start of a transfer, spin until the transfer is completed. Stuff the result into a FIFO and then resume normal processing.

You don't say how long each transmission is but if they're short and bursty this would be a viable solution. I'm willing to bet that your virtual COM port implementation has some hardware buffering as well, so a "laggy" interrupt service for it shouldn't present too much trouble. As far as the rest of what the MCU needs to do... you have some design decisions to make.

First of all, I like some of the answers here already, and some have gotten my up vote.

But just to throw in another possible solution: given the constraints of your project, would adding a second microcontroller be bad (would that involve another board run)? Maybe a simple 8-bit microcontroller that connects to your Cortex-M3 via a fast peripheral like SPI. The 8-bit controller of your choice would poll for bits and form bytes just like in the selected answer, but when it does have a byte, it could dump it to the SPI data register for transferring out.

The cortex-M3 side would simply interrupt on SPI data received. That cuts down your previous 400 KHz external edge-triggered interrupt to 50 KHz.

The two reasons why I'm suggesting this is because some of the other methods (PSoC or added FPGA) are a bit expensive (although this likely does not matter for a low volume academic project) and because it may allow you to preserve some of the structure of your current code.

Other than that, I think the PSoC idea is awesome with your own custom peripheral transferring over DMA to USB.

Given the 5x clock, one could generate the SPI clock using a 16V8 (the smallest and cheapest currently-available programmable logic device). A second 16V8 or 22V10 could be used as a fractional rate divider to generate the 5x clock, or one could use a slightly-larger chip (CPLD) and do everything in one.

Upon some further consideration, if one is going to use a CPLD, one can easily add a few additional enhancements to the circuit. For example, one may fairly easily add logic to have the circuit stall until it receives at least 1.5 bit times of stop bit, followed by 3.5 bit times of start bit; if it receives a too-short start bit, it should go back to looking for the stop bit. Also, if one is using SPI, one could use the /CS signal to ensure that the receiving device will see correctly-framed data. If the device receiving the SPI data can handle 10-bit frames, one could send such frames directly. Otherwise, each ten-bit frame could be sent as an 8-bit frame with the LSB set (7 bits of data), and a frame with all the LSB's clear (3 bits of data); the SPI clock would be accelerated during the stop bits so all the data would be sent. If the the second stop bit wasn't received correctly, the decoder chip could release CS before clocking out the entire last byte, or else set one of the lower (later-transmitted) bits which would normally have been left clear.

Some microcontrollers have rather versatile PWM-generation modules which include things like the ability to be held in reset by an external signal, and synchronize their timing to the release of such a signal. If your microcontroller can do that, depending upon its exact features, that might considerably simplify the CPLD or timing-generation circuitry.

Another approach which Rocketmagnet somewhat touched on, would be to have a small micro whose sole purpose is to decode the serial data and convert it into a format usable by the main micro. Your 400KHz data rate is pretty fast for software decoding, but something like a PIC could handle it if it didn't have to do anything else at the same time. Depending upon what devices you are familiar with, this could either be easier or harder than using a CPLD.