I have a project idea in mind, but it involves calculating the distance between two people. I've looked into Bluetooth, RFID, and NFC (unsure about this one), but none appear to offer the accuracy I would need (I am a novice at best, so I would welcome being corrected on this).

Bluetooth: seems to only be able to detect that someone is either in range or not in range. And although that range works well for what I want to do (~30 feet is common?), I would ideally be able to specify distances within that range at 5 foot intervals.

RFID: seems to only work with very short (sub-meter) distances.

Would one of these options work, or are there others that could work? Or is GPS the only route?

UPDATE: The idea is a child safety "net". A child would have some kind of beacon on them that only needs to send out a signal, and then the receiver would be on the parent. That way, if the child moved more than x distance away from the parent, the parent would be notified.

Ideally the parent would be able to set a different allowable distance depending on the environment they were in (crowded city street - small radius, park - large radius).

This idea might be patented, so it might not be suitable for a commercial project, but you can actually measure the position and orientation of one electronic device relative to another, with reasonable accuracy, using magnetic fields. This is how Polhemus and Ascension trackers work. They are used in VR motion tracking, and in surgery for tracking the position of surgical instruments during operations. 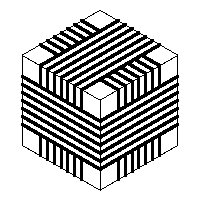 The basic concept is to have one set of coils transmitting, and another receiving. The transmitter coils emit audio frequency alternating magnetic fields, and the receiver coils then measure the amplitude of the fields in the three receiver coils.

There is some code available online for doing these calculations. You might also take a look at the guy's project page: Open source electromagnetic trackers using OpenIGTLink.

This may not be quite the system you're looking for, as it's fairly complex, and is giving you much more info than you wanted. However, a simpler algorithm could be used which just gave you distance.

A company called Sixense make a gaming controller with a 6DOF sensor in it. I don't know how easy it would be to integrate this technology into your project though.

Now that I know what your application is, I have been thinking of a very similar application. My suggestion would be this:

Use the three orthogonal coils approach. Both the mother and child have a set of coils. The child would be the transmitter. Every few seconds, the child module would transmit an acoustic frequency magnetic field on each coil in turn. The mother module would measure the amplitude of the voltage induced in its coils. If the amplitude was too low, or if no signal was heard for more than a few seconds, then the alarm sounds.

You may consider to do this application with Bluetooth. The market is more the driving factor than the technology. Allow me to explain:

You need to make a lot of experiments to make this work 100% (even than in some cases it won't work well) but my hunch is it will be good enough.

TI has an IC (CC240 or something like that, please look at TI site) that supports BT low energy (BTLE) with 8 bit uC. With good programming and decent hardware design, you can make this the size of key fob (the ones banks uses) less than 10$. (It would not support BT, but BTLE), charged via USB and has a battery that works for a week.

I don't know your application but a device that can measure short distances accurately is an acoustic range finder such as the Maxbotics LV-MaxSonar-EZ family of devices. It provides both digital and analog outputs and can resolve down to one inch or so. It would require that one or both of the persons have the device on them, however.

It's a good idea. In fact I think the first time I heard it was 25 years ago :-) and it probably existed before.

I don't want to discourage you but I'll point out some sources of complexity:

If you build this on top of some other devices, e.g. phones, some of those problems would have been solved for you. Other than a phone I can't think of a complete off-the-shelf solution.

Otherwise the choice of technology depends on your price target, manufacturing volume, desired accuracy and other specs, it's hard to give a generic answer. My first thought is to look at using RF and measuring round trip time, perhaps you can reuse some components from laser range finders and/or cordless handsets. The difficulty is that you're dealing with the speed of light so you need pretty good timing.

I've been considering the limits triangulation for similar applications. I wrote my masters thesis on beamforming, which is a method used to determine direction with a fixed array of sensors. I was working with direction-finding for continuous sounds, like car engines, but that's probably not necessary in this case. Beamforming works quite well with impulse signals, simply by measuring the difference in arrival time at different sensors on the node. Knowing the spatial configuration of the sensors, the direction of origin can be calculated. Make sure all your sensors for a given node aren't in a single plane, and you can even get a 3-d source direction. If you have multiple separated sensor nodes at known locations, triangulation of the source location is trivial. The system works very, very well for determining the location of snipers. So if your child is firing a sniper rifle in a pre-arranged field of sensors, problem solved! Though I make no guarantees about the other problems that might create.

The limit is that any single node can only compute direction of the source, relative to its point of origin. However, since each node has multiple sensors on it, the computations could be performed repeatedly, using each sensor on the node as a point of origin. Four sensors, four directions. In a perfect world, that's more than enough information to triangulate a location in three-space. Attach a device to your child that emits a unique impulse signal every so often, design an appropriate sensor node, and you should be home-free.

But then you get into the fun parts. What kinds of signals? What's the sensor node look like? If you're using EM radiation as your signal, you have to have very precise timing of signal arrival, or a very wide spacing of sensors, or both. Since you want portable, that's probably not practical; difference in arrival time would be under half a nanosecond! I'd consider sound. Much easier to time arrival times that way. Have the child carry a device that occasionally emits an ultrasonic pulse, say a 10 uS 100 kHz pulse every second. High enough no human and most animals won't be able to hear it. You carry an array of microphones with highpass filters on them, wired into an appropriate microprocessor or FPGA to run the beamforming and triangulation calculations.

Now, this all works in theory. In practice, local variations in the speed of sound, sampling rates, etc. are going to introduce error. How much error, I haven't sat down to calculate. I suspect, though, that it's pushing the limits of how well this kind of thing can possibly work. It would, however, be very cheap, probably patent-free, and avoid any problems with EM spectrum licensing.

Not sure if there's audio spectrum licensing...

Your application seems ideally suited for ultra-wide band (UWB) ranging systems made by manufacturers such as:

Both manufacturers sell evaluation kits. They also sell modules, some with build-in antennas, that are easier to integrate in a product than their chips (but end up costing more).

Those systems work by measuring the time of flight of a pulsed radio signal between an "interrogator" and a "tag" (each manufacturer use a different terminology). They are way more accurate and reliable than anything that is using the power of the received signal (typically, all ranging solutions based on Wifi or Bluetooth). At short range, accuracy can be around a centimeter, decreasing at longer range. Range can be 20-70m, specially in a "easy" setting such as a park outdoors.

As with all RF systems, everything is trade-off, and the fact that a technology can reach a very high accuracy or long range doesn't mean it will with a tiny power budget and/or a sub-optimal compact antenna.

GPS is an option but accuracy can be poor when the antenna doesn't have a good view of the sky (eg. at the bottom of a bag, with stuff above it, or when it's held in a closed hand). Some very compact low-power GPS module are available on the market, you should probably do a comparative evaluation before committing to one technology or the other.

Not the answer you're looking for? Browse other questions tagged bluetooth rfid distance nfc or ask your own question.

3
How to mesure distance between two objects?
-1
What are the options for short range under six inches 3D multi point location tracking?

0
Monitoring distance between two moving objects
2
Developing a new System... confused between RFID or NFC.. just a few questions
1
RFID distance transmitter
4
DIY NFC boosting antenna for a mobile device
0
use RFID ( or what else? ) for a broad distance measurement in 1-2 meter wide area
0
Looking for a short range detection and identification
0
Limiting NFC distance between reader and tag
0
How can I accurately find the distance between two drones over moderate distances?