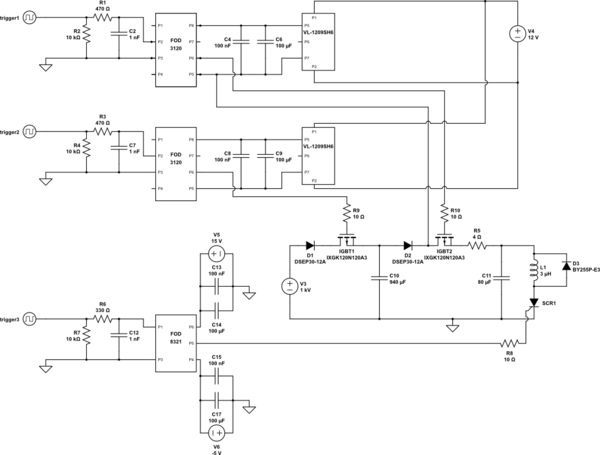 I am designing a circuit to provide a couple of strong and fast current pulses (~1000 A, more current is better, ~100 us, half-sine) to a coil in rapid succession. The purpose is to provide a magnetic 'kick' to a cloud of cold atoms. My idea is to use a large capacitor bank to quickly charge/recharge a smaller capacitor bank which stores the energy for the pulse. This idea is outlined in words below and drawn in a block diagram in the attached hand drawn schematic. The sequence for a single pulse would be:

For multiple pulses, steps 2) and 3) could be repeated. 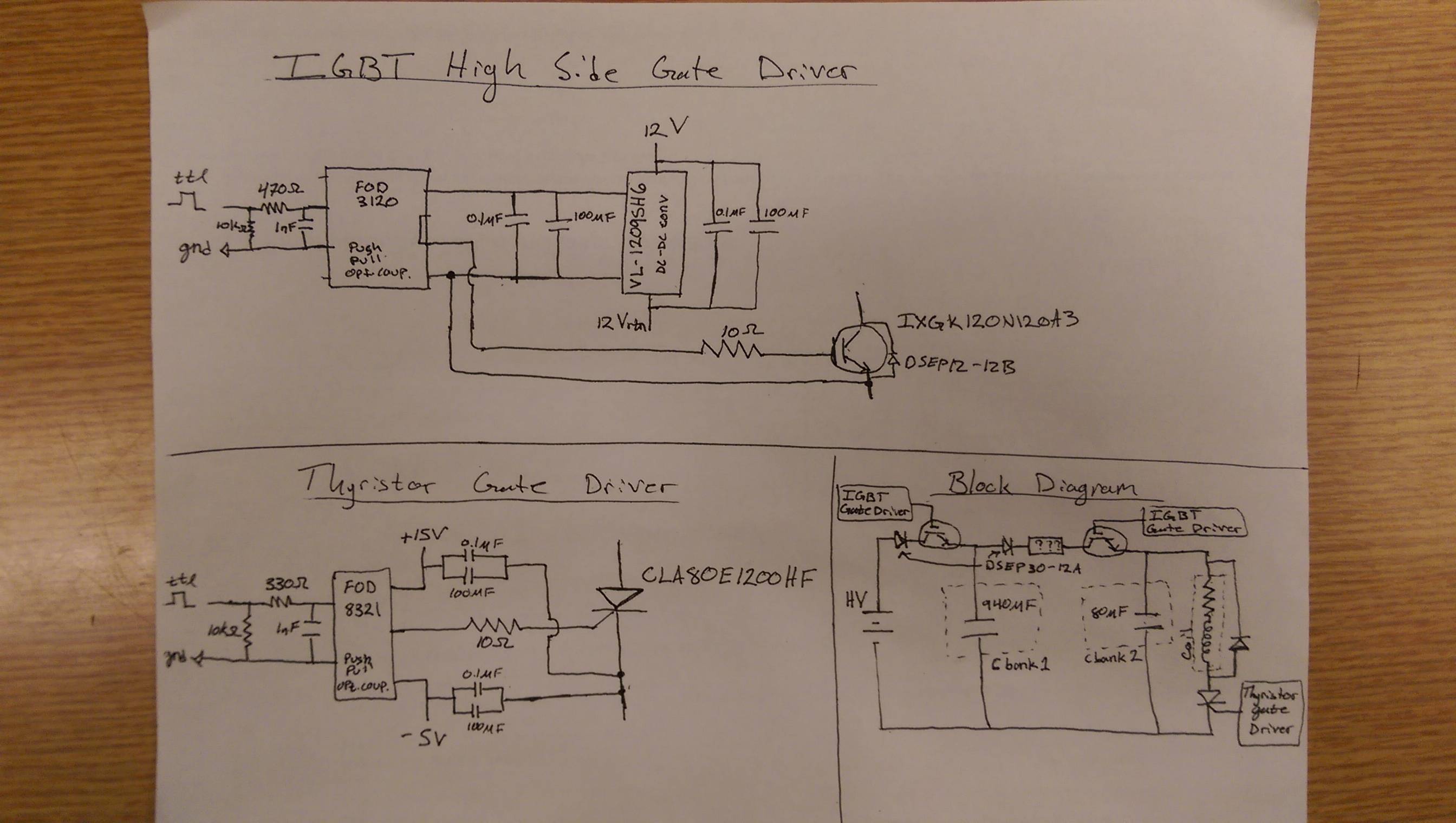 I worked out some details of gate driving the thyristor and IGBTs and had a PCB printed with all the switches and screw terminals for connecting up the power supply, capacitor banks, and coil.

More on the what I mean by "fail." During the capacitor-to-capacitor charge transfer, there is a transient on the thyristor gate line. The transient lasts as long as it takes to transfer the charge. The transient is not noisy or high frequency since the IGBT is toggled at effectively zero current so I don't think adding a snubber could help much (I am also unsure of the design for a high side IGBT snubber). The transient scales with the applied HV, and at about 200 V, it becomes large enough to trigger the thyristor. When the thyristor triggers at the same time as the charge transfer, the large capacitor bank is allowed to discharge completely through coil which burns out my charge transfer IGBT. The only way I have found to affect this transient is by changing the capacitor to capacitor coupling element, labeled as ??? in the hand drawn schematic. The transient can look like a single half sine pulse if I couple the two capacitors with an inductor (18 uH) and looks like a decaying exponential when I couple the capacitors with a resistor (4 ohm).

My question: Given that the circuit worked great before but is now failing due to transients, I suspect either a grounding problem, a problem in the way I'm driving the gates of the IGBTs/thyristor, or a problem with my capacitor-to-capacitor coupling element. The details of my gate driving are also specified in the attached hand drawn schematic. Note that the 12 V supply is floating and powers the DC-DC converter with +12 V and 12Vrtn. I use the same 12 V supply for both IGBT gate drive circuits. The -5 V and +15 V supplies powering the thyristor's optocoupler are referenced to ground. Any advice would be greatly appreciated, especially if there is something obviously wrong with my method of gate driving.

I've tried adjusting grounding and adding a capacitor between the thyristor gate and cathode (0.1 uF and 2 uF) per SCR circuit falsely triggered during capacitor charging

Let me know if you would like any other information (data sheets, scope traces, pictures of my capacitor banks or set up, etc).

I've solved the problem up to 650 V (current transducer gave 1500 A) by adding an RC snubber across the thyrisotor AND coil. I used 100 nF and 20 Ohm. I'm not sure why it helped to go across the coil, but hopefully I can optimize R and C values to push the voltage higher. 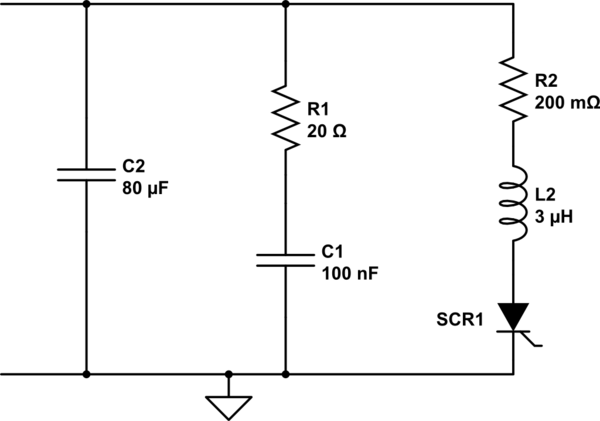 Are you using GroundPlanes? At 5 MHz frequency content (100 ns edges), the copper foil begins BEGINS to provide some magnetic shielding.

One square of copper foil, default thickness of 35 micron (1.4 mils) of weight 1 ounce/foor^2 has resistance of 1/2,000th ohm. A current of 1,000Amps thru that one square produces 0.5 volts. And 3 squares of such foil, any size squares, produces 1.5 volts upset, adequate to invalidate many a "logic" control signal for your high-current devices.

Draw the Grounding, the RETURNS, using a quadrille path (lots of squares), to scale. Count the squares, understanding each is 0.0005 ohms.

3
What does this IGBT data sheet mean by "transient" gate voltage?
0
Capacitor discharge: Is gate voltage on IGBT proportional to collector?
1
How to create high voltage levels for high side input of a driver?
0
Negative gate SCR
1
HV capacitor switch
1
Transfer Function of Controlled Capacitor Discharge
1
IGBT operation failure at high current
2
Why did my IGBT die? What did I do wrong?
1
High Side Driving of IGBT
5
Floating high-side thyristor switch is destroyed by massive gate voltage undershoots