Accuracy of a single to differential ended circuit

I have single-ended senors/transducers which are hooked up to a DAC in single-ended configuration. The transducers are calibrated by another company with certificates and they can output from -10V to +10V DC.

For mitigating common mode noise issues I want to convert these transducer outputs to differential ended. Currently I'm using coaxial cable with BNC connectors in single-ended earth referenced configuration and the sources/transducers are floating. I want to switch to diff. ended configuration and plan to use twisted shielded cable with BNC connectors. Below illustration roughly shows the current and planned cases: 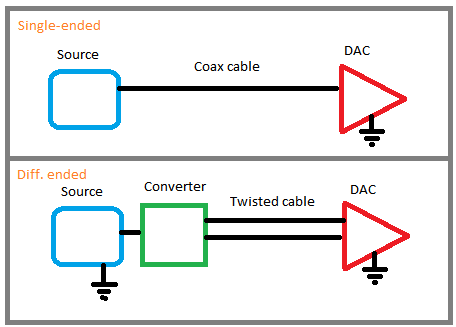 After some research I found the following topology for single to differential conversion. LT1054 is just there to create negative supply for the opamp rails.

My questions are the following:

1) Now the voltage measured by the DAC which is Vo+ - Vo- is two tiimes the transducer's output voltage. I can see this is expected because of mirrored outputs. In this case should I reduce R3, R4, R5, R6 to 5k or simply divide the voltage by two in software end? Which is more common or convenient? (edit: I forgot to mention the DAC range is -10 to +10V so for 7V transducer output it will be in trouble to measure 14V)

2) My concern is that in this topology one solders the resistors himself. So the resistor tolerances and accuracy would effect the output. I mean if the transducer outputs 1V the diff output is 2V in simulation. That's alright and expected. But in real those resistors together with wires will not be exactly 10k. So instead of 2V it might read 2.1V which is quite large error. So Im wondering: Am I in wrong direction when trying to convert accuracy important single ended sensors to diff. ended myself this way? Or should I use a ready chip? When trying to mitigate common mode noise I dont want to introduce offset error to the transducer output by this circuit.

For the constraints you have, I would suggest using chopper or autozero opamps. If noise is an issue for you, then go for the LTC2057. If noise is not too much of an issue, then almost any of them would do. But do yourself a favor and stay with Linear and Analog. TI's opamps are not as good when it comes to precision applications.

For the resistors I suggest using a matched resistor array like the LT5400. The LT5400 gives you better than 0.05% matching over temperature and humidity. If you don't need the high specs, then there are cheaper options.

Please note that chopper and autozero opamps have a noise spike somewhere in the 1-100kHz region. Your ADC has to either reject them (which delta sigma ADCs do) or you need to filter it at the output using a small RC filter.

You also want make use of the LT1054's feedback to stabilize its output voltage. Or even use an negative voltage LDO like the LT1964.

Not the answer you're looking for? Browse other questions tagged operational-amplifier common-mode or ask your own question.