I'm using an nrf52 and an OPR5005 reflective optical sensor which takes roughly 20mA. In the design I have only 30mmx30mm space, so only suitable battery is cr2032 or cr2477 so far. The question is how far I can go without switching the sensor on and off? (sensor should be always open)

EDIT : Here is my final schematic file after answers below. I decide to go with nrf24l01 and for mcu I put a stm8l also I add a load switch to on/off the sensor

stm8l : 3.7uA at sleep, 0.5mA at run mode (it will wake every 25ms and will enable sensor and record the data to eeprom and will sleep again. It will take almost 5ms estimated, including settling times) 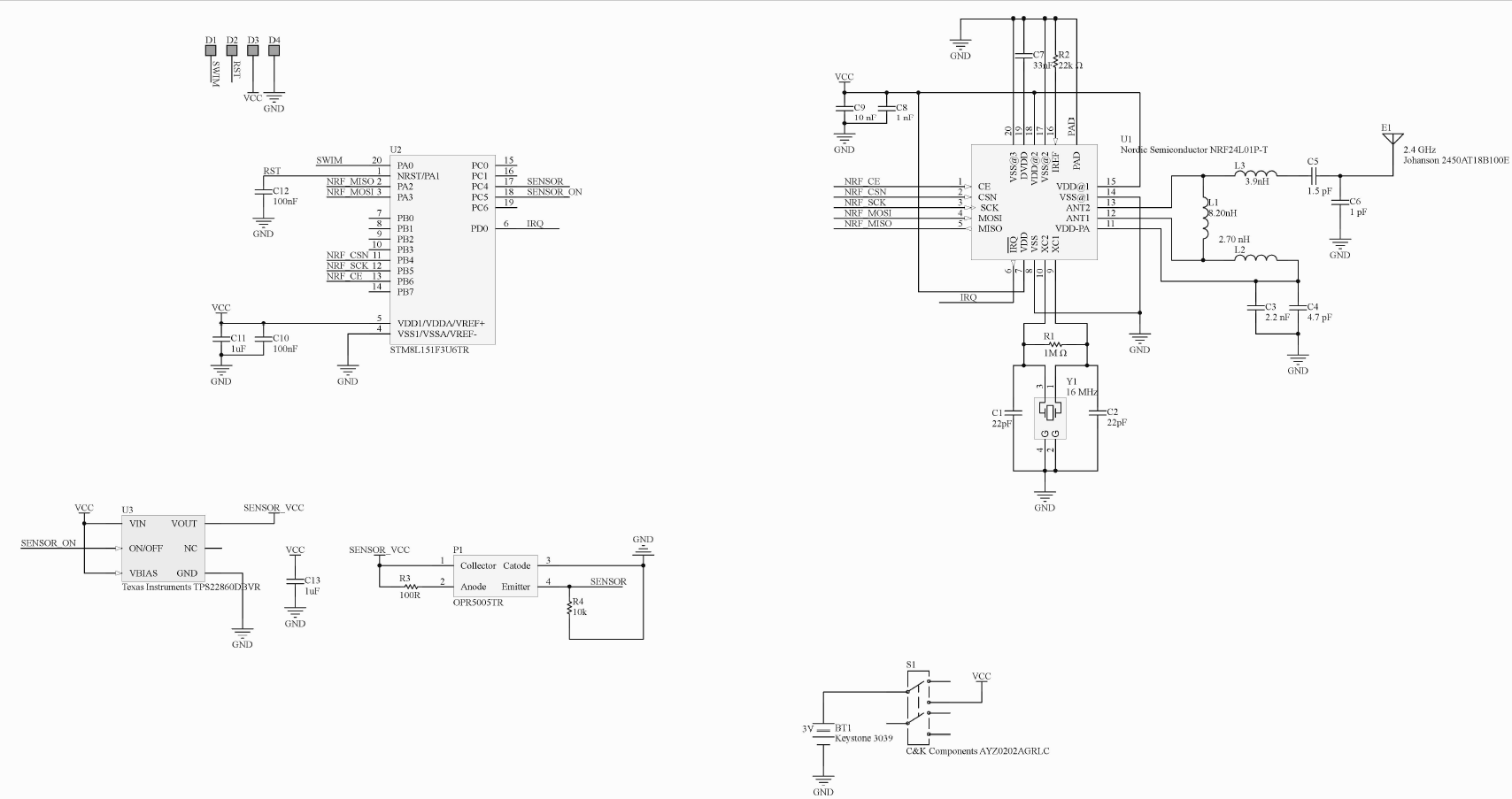 A human eye blink is almost always longer than 50 ms. If you're only counting eye blinks, you only need a few measurements during each blink—one measurement every 15 ms would be plenty. The datasheet for the OPR5005 shows typical rise and fall times of below 100 μs as easily achievable, so having the sensor on for 300 μs before each measurement should be plenty to allow it to settle.

[The answer is more stark than the O.P. thinks.]

A CR2032 and CR2477 cells can supply only 0.2mA and 1mA continuous current, respectively. They will not be able to provide 20mA for the OPR5005 sensor to work. For are Lithium Manganese Dioxide batteries it's normal to have very low output currents.

The CR2477 has over 3 times the capacity of the CR2302 so seems a better target battery for your project. You can draw many mA from the battery if you are willing to sacrifice long use times.

Even though you are measuring eye blinks it seems it would still be possible to use a sleep mode for your MCU and turn off the LED in the OPR5005 to reduce power consumption.
If you were to come out of MCU sleep at several hundred Hz, measure eyelid open/closed status (perhaps no more than 50-100 us on time) and go back to sleep you may be able to reduce your power by almost 100:1.
If you characterize the LED/phototransistor pair then you can find more accurately the current you need to run the LED at. Perhaps this may be closer to 10 mA than 20 mA (and any gain is worthwhile).

To deal with the pulse current drawn from the battery all you need is a large value capacitor across it. The battery keeps the capacitor fully charged and will supply current far beyond the 1 mA use to measure it's load longevity. As an example folks use CR2302 with a LED strapped directly across them and get lifetimes of 10's hours even though it is a serious abuse of the battery.

Your power draw is essentially a constant current when on (dominated by the LED) so you can use a simple CC discharge form such as dV = (I*t)/C to work out the change in terminal voltage (here I'm simply ignoring the current from the battery, and initial conditions are fully charged C).

So for an MCU/LED on time of 1 ms and a terminal voltage change of say 0.2 V at 20 mA you need a minimum of 100 uf. I would fit the largest value capacitor you can across your battery given your limited space.

I assume in all of this you want to transfer the data from the (head mounted?) measuring platform to your PC. Spending most of your MCU time in sleep probably means losing your BT connection, but perhaps you can simply store the data locally for most of the time. On occasions, you could come out of sleep and power up the BT connection to transfer data.

I know it's not your chosen components, but I'd be tempted to use an NRF24L01+ in burst mode to transfer data. These are easy to initialize and provide a reliable link (retransmit) without needing connection oriented protocols.
For the MCU a small ATTiny85 might suffice, though I have no idea how much code you need to run in your MCU.

A much better attempt at a viable circuit. 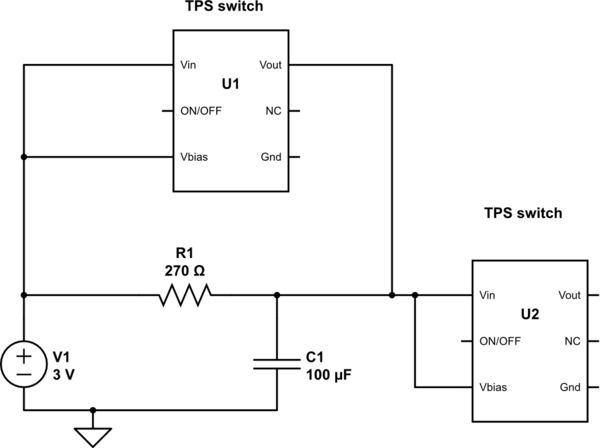 You have a switch to turn your unit off/on (I did not show it here). With 100 uf direct across the battery supply and a high output resistance (relatively) battery the capacitance is enough to cause the supply voltage to rise slowly.
In the extreme it (as the battery is consumed and it's internal resistance rises) this may be enough to cause the MCU to misbehave on power up.
If both switches are off on power-up then the current to charge the cap is through the R1 resistor. When the cap is fully charged (you could use the A/D to test it perhaps?) then turn on the first switch, U1. Now when you turn on the second switch (U2) the R1 resistor is shorted (by U1) to share the sensor current from the cap and the battery.

Not the answer you're looking for? Browse other questions tagged batteries sensor low-power bluetooth-low-energy or ask your own question.