What is the effect of a triac on a torque/speed curve? 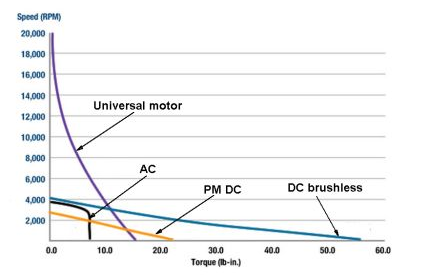 Now let's say I only squeeze the trigger down 50% so that the waveform now is chopped up by the triac. What happens to that curve?

Another way to ask the question is does a triac change the speed more, the torque more, or both in some proportion?

With reduced voltage, the curves for all the motors except the AC induction motor will move downward with approximately an equal speed reduction for every speed. For the universal motor, that approximation may be a bit crude.

For the induction motor, reduced voltage will reduce the torque at every point approximately proportional to the per-unit voltage squared.

Not the answer you're looking for? Browse other questions tagged motor triac motor-controller or ask your own question.

3
Is it possible to change the speed of an AC motor(drill press) without losing too much torque?
2
Significantly reducing speed of single-phase AC motor
7
Is there a good reason to use an SCR based speed controller instead of a TRIAC?
1
FAN NOISE issue in triac phase angle dimming
0
Controlling a PSC motor with a triac thermostat
0
AC induction motor controlled by TWO TRIACS. They blow down
0
How does a generator not stop itself?
0
Phase control universal motor dimmer
2
Controlling speed of PSC induction motor (Questions about operating at high slip)