In clock recovery, how is the recovered clock used to recover data?

I've been refreshing my memory on clock recovery, and I've hit some issues trying to understand how the recovered clock can be practically used to latch data bits from the input data stream.

For simplicity, let's assume a NRZ line code, such as 8b10b. Because of NRZ encoding, the data stream will transition if a logical 0 follows a logical 1 or vice versa. Any transition on a wire carrying NRZ data will be due to the transmitter clock latching a new bit to be sent.

In a traditional clock recovery setup using a PLL/edge detector, the recovered clock's positive edge will eventually align to the transitions in the received bit stream, and thus be aligned to the transmitter's clock.

The problem I see with aligning to the transmitter's clock is that when using the recovered clock to latch the input data into a flip-flop, immediately after latching (or possibly even before due to jitter! A PLL can't lock on to the exact frequency), the data stream as seen by the flip-flop's input will transition. Although small, this is a hold (setup) time violation for the flip-flop. Additionally, I recall that sampling as far away from transitions as possible is ideal to accommodate for jitter.

The naive solution I would use would be to "invert the recovered clock before feeding it to the flip flop which latches the input data". Assuming the problem I perceive exists, what solutions are used to work around the issue?

I think this may be glossed over in some of the literature because obviously you want to sample the data in the middle of the data bit (sampling accurately in the middle of the data bit is a large part of ensuring high jitter tolerance), so obviously you're going to phase shift or delay the clock or the data somewhere along the line by 90 or 180 degrees, so it's not necessarily mentioned. There are a bunch of ways of doing that. Invert the clock is one. Fixed phase shift with an analog technique such as a filter, hybrid coupler, or delay line also works. Quadrature or differential outputs on the VCO is another option. If you're not using a PLL but are instead using phase interpolators or tapped delay lines, the usual solution is to use two phase interpolators or delay line taps that are held 90 degrees apart by the control logic, one to look at the edges and the other to look at the data.

Let's take a look at a couple of commercial parts and see how they do it. First, a 30 Gbps GTY transciever out of a Xilinx Ultrascale FPGA (from UG578 page 192):

There you have it, two phase interpolators, one looking at edges and one looking at data. The control logic detects transitions and checks to see if it's sampling the edges too early or too late and adjusts the phase interpolator taps accordingly, keeping a 90 degree offset between the two so the data is always sampled exactly half way between the transitions that it has locked on to. It can track a frequency difference between the internally generated reference frequency (half line rate) and the actual receive line rate of up to +/- 200 ppm (above 8 Gbps). 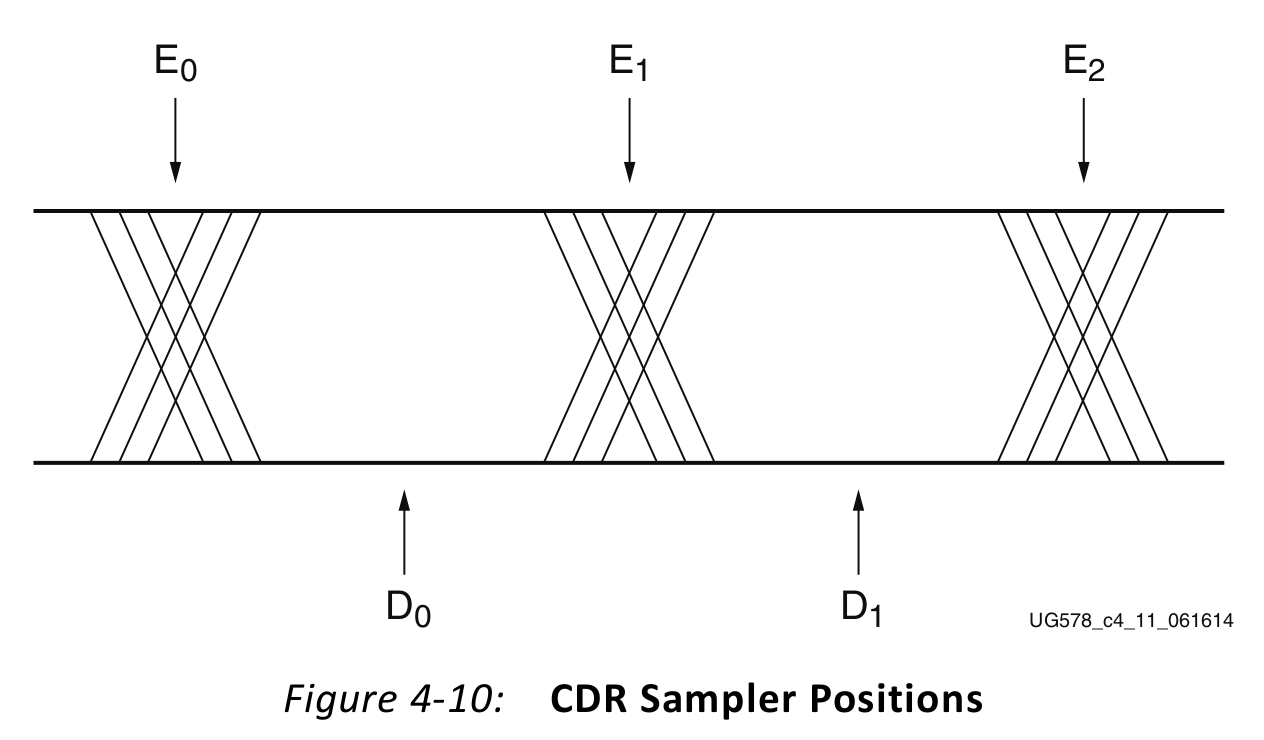 How about a part that actually uses a PLL with a VCO to recover the data? Well, this technique seems to have fallen out of favor, at least for modern high speed serial stuff. Not entirely sure why, but I presume it's beause building VCOs is a pain and if you use phase interpolators then you can share a VCO across several transmitters and receivers instead of requiring one per receiver. Anyway, here is the block diagram for a Lucent LG1600FXH, an older (1999!) part for retiming SONET up to 5.5 Gbps (LG1600FXH datasheet, page 2): 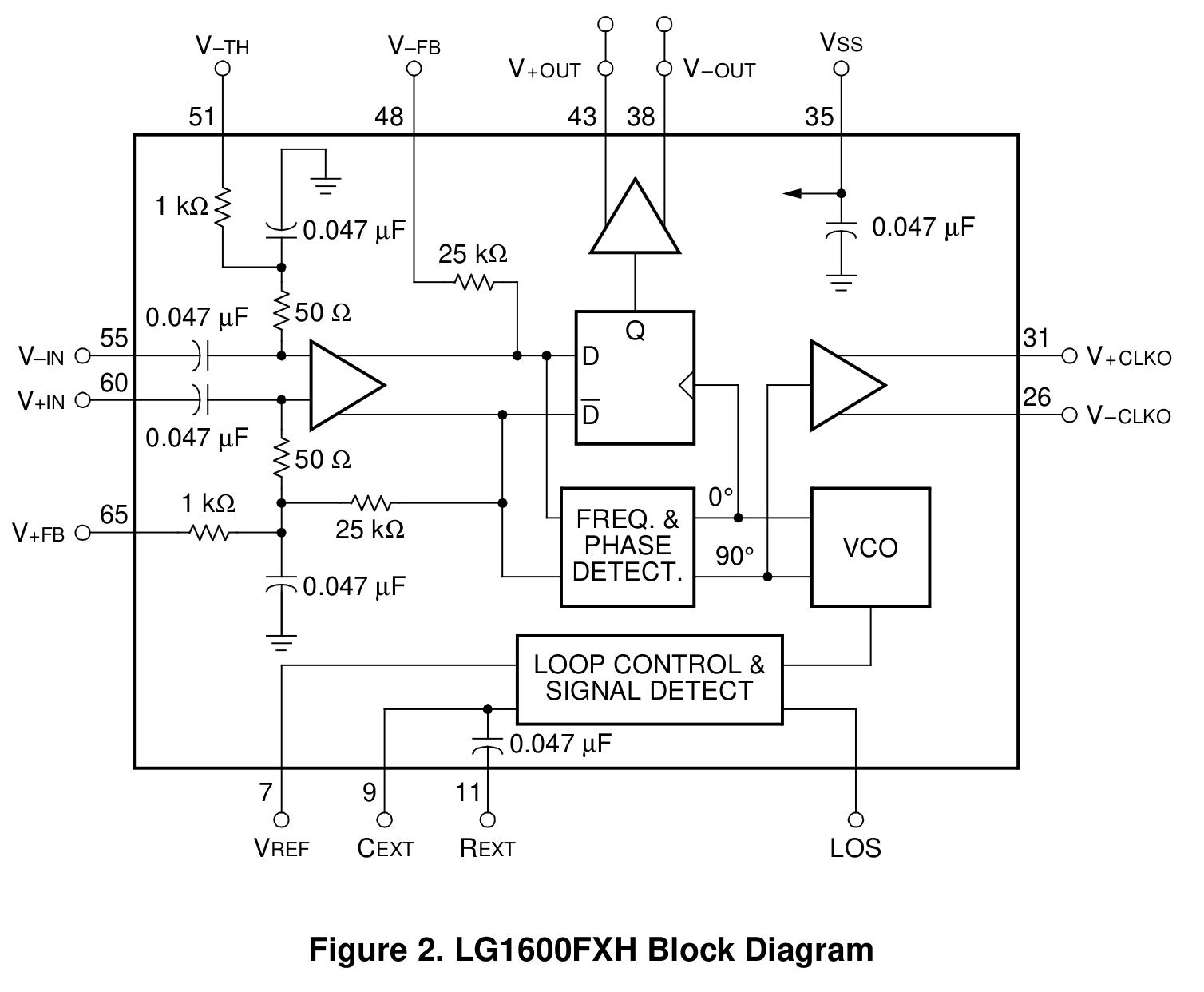 Hey, look at that, their VCO has quadrature outputs! Actually, that's a bit of a red herring. In this case they are using the in-phase output to clock the capture flip-flop, but they also aren't locking the VCO onto the data directly, they're locking onto the output of an edge detector (LG1600FXH datasheet, page 3): 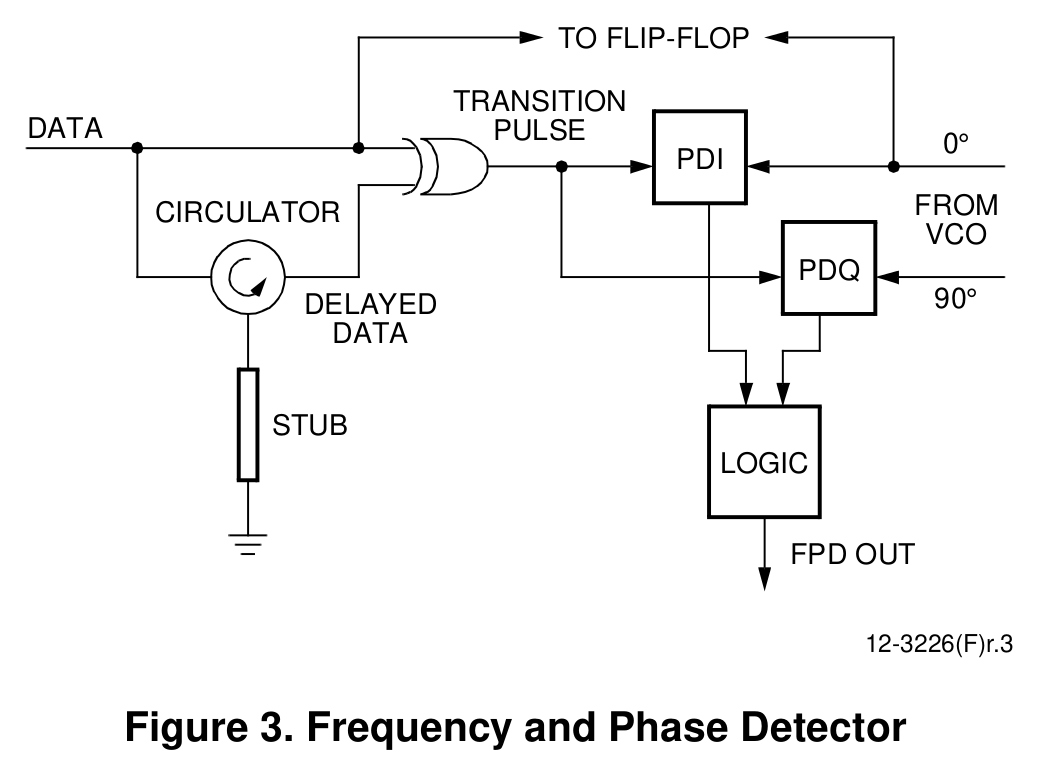 The edge detector uses a tuned delay line and an XOR gate to produce pulses that the PLL locks on to. These pulses start on transitions, but the pulses are tuned by the delay line to be exactly half of the data bit width (LG1600FXH datasheet, page 3): 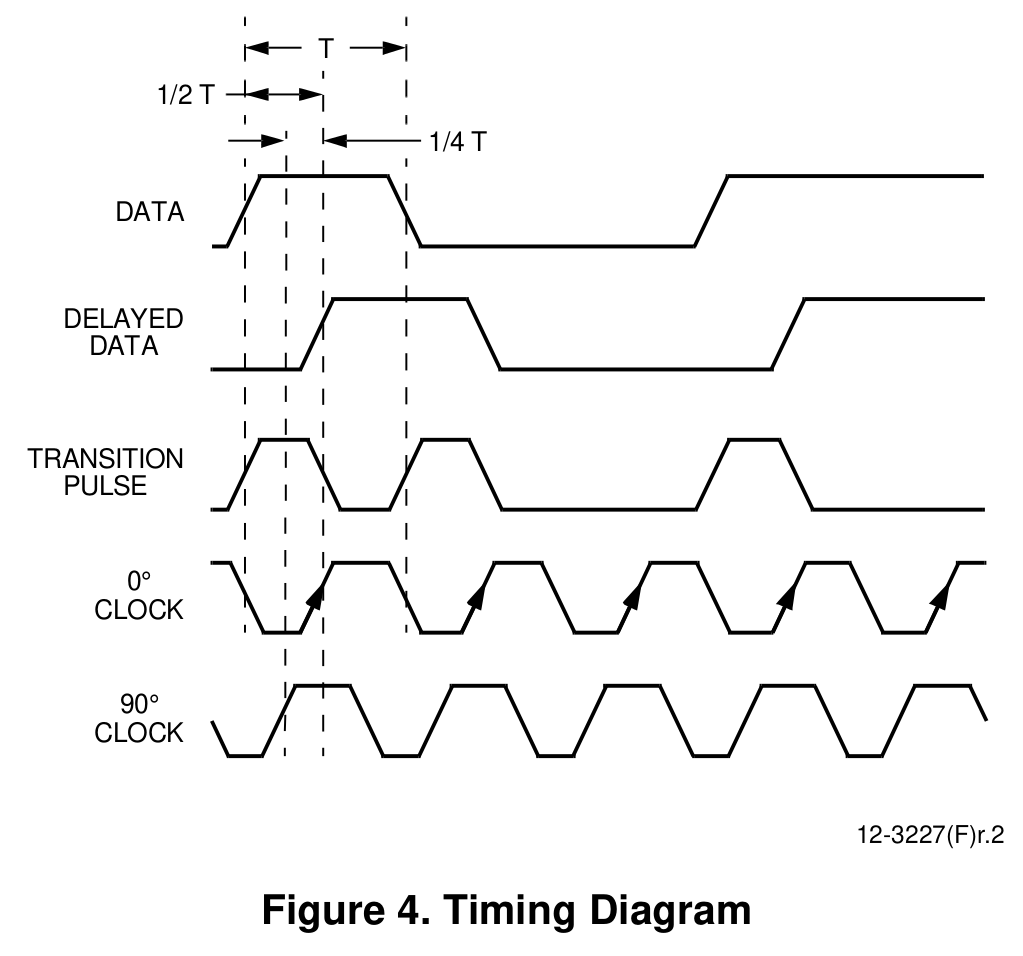 It looks like with the way the phase detection logic works out, the PLL actually locks inverted with respect to the edge pulses. Because of the tuned delay from the edge detector, the PLL locks with the in-phase output rising edge smack in the middle of the data bit.

I will also note that the LG1600FXH is actually a hybrid integrated circuit with several discrete components on a ceramic substrate. That's probably the only real way to get away with building a stub delay line based edge detector like that. The LG1600FXH datasheet also has a rather extensive theory of operation section; I recommend taking a look at it.

A major advantage of the phase interpolator based CDR circuits is that they are usually capable of operating over a very wide range of line rates, and they are relatively easy to reconfigure for a different line rate. For example, the GTY transceivers in the Xilinx Ultrasacale series FPGAs are capable of covering essentially the entire range of 500 Mbps to 30 Gbps, switching between two different PLLs and several divider settings as necessary. PCI express links always come up initially in gen 1 mode (2.5 Gbps per lane), and then negotiate up to higher speeds (gen 2 at 5 Gbps or gen 3 at 8 Gbps per lane). The links can also be renegotiated on-the-fly for power/performance trade-offs (for example, a laptop discrete GPU falling down to gen 1 when not being actively used, then switching to gen 2 or gen 3 when watching a video or playing a game).

For the LG1600FXH and other CDRs based on analog delay methods, the problem is that the edge detector generates pulses of a fixed duration. The result of this is that the range is much more limited, only a handful percent around the design line rate. As the line rate diverges from the design line rate, the jitter performance will degrade as the data sampling point moves away from the center. Even further out, and the edge detector and phase detectors won't work properly, causing the PLL to not lock reliably. And the delay line cannot be re-tuned as it's physically cut to length during manufacture.

Use a Ring Oscillator with differential inputs and output. A 2-stage Ring Oscillator provides all 4 quadrature choices of clocking, and the differential nature provides substantial rejection of GND and VDD noise. As the highest operating frequencies, the generation of rail-rail clocks is very difficult, and CML current-mode-design should be considered.

I did a design where we inverted the clock to solve this. But then you have negedge flops which cause other problems. You can also use a b latch to get the same effect. Usually we just let the physical design team treat it as a timing constraint and make sure the data doesn't violate the setup/hold window.

The clock and data recovery or CDR needs to achieve frequency lock before it can achieve phase lock and retime the input data.

Frequency acquisition is accomplished with two key sections. The first section is a secondary frequency lock loop (FLL) that drives the VCO towards the desired frequency. A lock detector then enables a PLL. Data activity must be present with 50% transition density for the CDR to function.

The Phase error is used to correct the clock phase by an averaged amount of phase error to reduce the jitter from tracking data symbol jitter. This is optimized based on the system parameters.

The exact means of phase lock may be patented and proprietary. Some may be digital and use both edges and levels to integrate the phase error over the entire symbol and others may only be dependent on data edge transitions.

In general FLL and PLL designs depend on the frequency stability of the source and phase stability in the channel with resulting SNR, jitter margin and phase error margin for low error rates (BER).

For example I once designed an NRZ CDR with video quality SNR that only relied on a short sync pattern and then 1 bit transition per 1000 bits (not 50%) because the clock stability and signal SNR were good. Thus phase correction could be done easily.

Not the answer you're looking for? Browse other questions tagged clock flipflop pll clock-recovery or ask your own question.

5
If the output of a D type flip-flop appears immediately on the clock edge, how can the previous output be used?
1
Flip Flops and Propagation Delay
1
Does the output of JK Flip Flop toggle continously?
2
Reconize JK Flip-Flop operating edge: rising or falling?
3
Why is D flip-flop positive edge triggered instead of level triggered?
3
Difference between latch and flip-flop
1
crystal oscillator as backup (or with sync)
3
Flip-flop vs latch: Do flip-flops have an edge detector integrated?
0
Modelling digital DLL for CDR for simulation/modelling purposes only
0
Clock data recovery waveform