What is AC actually?

What is actually alternating current (AC)? And direct current (DC)? I've been reading several books about basic electric circuits analysis and they are contradictory.

I'm inclined to think that in practice wins the first option but maybe it's better the etymology of the second option.

Some other cuestions have relation to this:

AC does not have a precise meaning, its meaning can be context dependent. It's probably better to identify various waveforms and ask whether they could be called AC.

A sinewave waveform with a zero average would certainly count as AC.

A square, triangle or any other waveshape with a zero average would also count as AC.

If any of these waveforms had a small non-zero average, they could be described as AC with a small DC component.

Generally with AC, the 'alternating' part of the description suggests (but it's only as weak as suggests) that the waveform reverses polarity from time to time. If one of the waveforms above had a large DC average, such that it didn't reverse, then it could be described as fluctuating DC, or DC with ripple (as Michael K points out), or could be called AC on top of DC, or AC with a large DC component. All would be correct, or at least, none of them are wrong.

In all cases, if it really matters what the waveform is, then describe the waveform voltage as a function of time, don't get hung up on how different people try to name it. If it's in an exam or class assignment, then memorise what your tutor expects to see (it will be in their notes), and just reproduce that for the marks.

That's actually a more complex question than you imagine.

As @ThePhoton mentions, in reality all voltages can be expressed as having two components. A DC part and some AC time function. The time function can be anything. A simple sine, a triangle, pulse wave, anything you like with an average amplitude of zero.

Obviously the wall socket has, or should have, a zero DC part, and the battery should have a zero AC function. However, in reality most every signal has both to some extent or another.

In practice whether we call a signal AC or DC depends to the most part on what information the signal is carrying and how we intend to use it.

Example 1: Consider the output of a bridge rectifier.

Obviously the input here is AC, but what do we call the output.

If we are going to use it for the regular function to generate a DC power source, we call it DC, despite the fact it is really an AC function with a DC component.

If however we intended to feed that full rectified wave into an amplifier as a signal we would call it an AC signal. 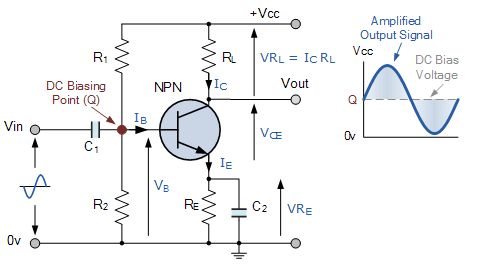 Again the input is obviously classical AC, but in order to function correctly, a DC voltage component is added and the output ends up with a DC component of Q. However we would still call the output an AC signal despite the bias.

In fact this still holds true even if the input signal is removed. On the scope the output may look like a DC voltage, but we would refer to it as a zero amplitude (biased) AC signal. 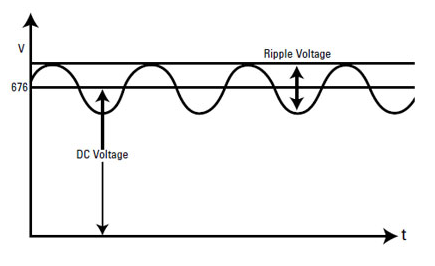 Either could be correct. Which one is more correct depends entirely on how the signal is being used. In some applications, both could even be true.

Other than the simplest examples of line and battery voltages the terms AC and DC are relative and application specific. Which term you use or hear should invoke a certain higher utilitarian meaning.

There are two different definitions of AC and DC that don't entirely agree with each other.

I don't know where the first definition comes from or what sub-field prefers it, but I have seen it used and vigorously defended a few times on Stackexchange and other online sites.

The second definition is the one used in circuit theory and most academic work in EE, in my experience. The value of this definition is that any signal can be broken down into AC and a DC components like

With these definitions, we can in many circuits find ways to understand the circuit behavior by analyzing the effects of the DC and AC components of the signal separately. For example, if the amplitude of the AC component is small, it might be possible to analyze its behavior in a linearized model of a circuit, even if the circuit is a nonlinear one.

As you've noticed, "AC" is a term with multiple definitions.

Avoid stupid arguments, and always beware of chasing after the "Single True Meaning" of words. That's called a "Swiftian Battle."

This was well parodied in Gulliver's Travels, where the Liliputians had a war between Big-endians and Little-endians. Looks like Johnathan Swift could see the future and the internet coming. The stupid Liliputian war involved: vast and teeming hoards ...of tiny little people ...at each others' throats ...fighting about the One True Way way to crack an egg.

Current is the movement of charge. The charge carriers in a conducting material such as a copper wire are electrons.

If there is a force on an electron it will move. When dealing with electricity we are concerned with the electromagnetic force.

For direct current, the electrons on average go in one direction.

Not the answer you're looking for? Browse other questions tagged circuit-analysis terminology or ask your own question.

-2
What kind of power supply do you run through a metal detector coil?
-7
Why graphical representation of a DC current/voltage is a straight line?
0
Why does current associated with a rectifier said to have both ac and dc components?

9
What are sacrificial components?
2
circuit analysis of DC-source, inductance and modulated resistance
5
What actually happens in a RC circuit?
1
What do you actually mean by DC voltage gain and AC voltage gain?
0
How does one relate an RC circuit's time domain solution to phasors?
5
What is this kind of symbol meant to be?
0
Capacitor Discharging Time under a Sinusoidal Voltage Source
11
Do electrons actually jump across contacts?