I'm playing around with opamps trying to build power supply for lead acid battery charger, but in general I want to learn a bit about opamp based design. I'm stuck with constant current mode. 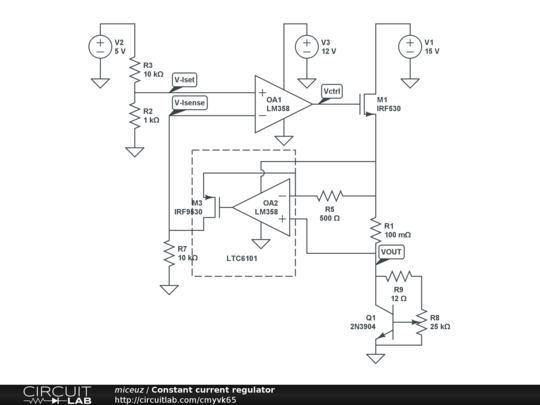 So, OA2 and M3 are here to designate current sense amplifier IC that outputs voltage proportional to voltage drop on R1.

My problem is that whatever I do, it either oscillates or does not limit current from some point.

I've tried slowing down OA1 by adding a capacitor on negative feedback path or a low pass filter after current sense amp output, but then, either oscillations become worse, or, when I increase the load, OA1 stops decreasing its output at some point, voltage at output of M1 becomes fixed and I have no regulation.

The best I could achieve was by using high speed opamp such as LM8262 as OA1 and small (1nF) cap across the current sense amp output. On the maximum load, the system was oscillating a bit, but average current was somewhat right.

My suspicion is that mentioned current sense amplifiers are not designed to work in linear regulation, but rather as current feedback for some ADC to read (at least, all of them have such application as typical in their datasheets). What I suspect is that phase shift from them is too big. Am I right?

Can anyone recommend a better option for high side current sensing/limiting or some procedure for stabilizing the circuit?

For reference here and because it may change, the circuit you are currently asking about is: 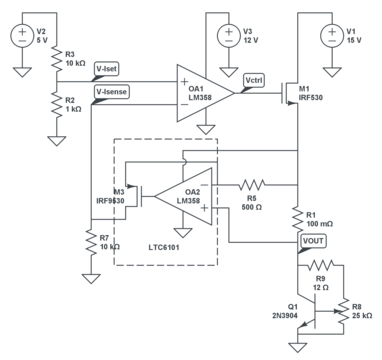 This is supposed to regulate output current, but the complaint is that it is unstable. R1 is meant to be a high side current sense resistor. You say this is for charging 12 V lead acid batteries. You don't say what current, but probably a few amps. In that case 100 mΩ seems rather large. Note that at 5 A it will dissipate 2.5 W.

However, the large current sense resistor should only make measuring the current easier. It looks like your intent is that OA2 provide a ground-referenced voltage proportional to the current thru R1. That concept is good, but the implementation is flawed.

What you need is a "diff amp" that has some finite gain. The differential part eliminates the common mode voltage on R1, but the finite gain part is also important. As it is now, OA2 is being used open loop as a comparator. It's output will quickly switch between full high and full low as the current goes slightly above and below the regulation threshold.

Another problem is that the top of M3 is not connected anywhere, so it can't source any current onto R7. I don't know what that dashed line is supposed to show. Usually if things are connected to it like that it means a conductive case, but you show nothing else connected to it. A case is usually grounded, which is certainly not what you want the source of M3 (strange designator for a FET) connected to. It also makes no sense that you need to buffer the output of OA2 amplifier. I didn't look up a LM358, but if that does not have a push pull output stage, get one that does.

All in all, I'd lose the wierd current sense amp circuit as it is now. There are diff amp chips that do what you want directly. Sometimes they are called instrumentation amplifiers. These have a truly differential input, finite and sometimes adjustable gain, and the output can be referenced to some other voltage like ground.

Driving power MOSFETs directly from OpAmp outputs may or may not work. The problem could be hidden in the MOSFETs' input capacitances. This value, called Ciss in the data sheets, is likely in the range of 0.5 nF to 2 nF. If you think of these capacitors paralleled to your gate and source terminals, you see how you may have created an oscillator.

What may work to prevent this problem is boosting your OpAmps' outputs with transistor stages, probably as in here: https://electronics.stackexchange.com/a/13377/930

Also, your NMOS (M1) rides on top of the load, which puts further challenges onto the driving circuit. Typically, you put an NMOS' source at GND and connect the load above, or you use a PMOS with the source at the supply rail and connect the load between the PMOS and GND. The goal is to have the source at a stable rail because then, you are able to drive the gate with regard to this stable rail. In theory, VGS will be the same whether or not you put this differential voltage VG-VS on top of a common-mode signal, but for practical designs, things become way better when VS=0

I've tried slowing down OA1 by adding a capacitor on negative feedback path or a low pass filter after current sense amp output, but then, either oscillations become worse, or, when i increase the load, OA1 stops decreasing it's output at some point, voltage at output of M1 becomes fixed and i have no regulation.

The feedback compensation needs to be between the inverting input and the output of OA1.

This Intersil app note describes a proper type-2 compensator, which should do what you need: 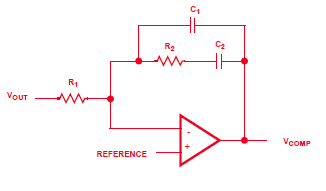 You can always start with just a capacitor (C1) and add the R2-C2 branch if needed.

Another thing to remember is that your circuit has a fixed current reference (R3 / R2 divider). Once the battery approaches its charged state and the current starts to drop, your loop will send the control to the rail to try and continue delivering the target current. You need some logic to break out of constant-current mode and into topping charge mode. (See this app note for details.)

I've finaly got it!

thank you all for suggestions, i've learned a great deal!

Not the answer you're looking for? Browse other questions tagged power-supply current operational-amplifier or ask your own question.