If anyone can take a crack at explaining, it would be greatly appreciated.

Just to be sure, I understand what the process is, in terms of current flow and from input to output and vice versa. Just not getting why one is preferred over the other, and what it has to do with having a floating Hi input or why I wouldn't want to have a floating Hi.

Input would be greatly appreciated.

longer version: The following is a practical explanation of current-sources/sinks as used in microcontrollers & TTL logic. For a more theoretical description, see the Wikipedia page on current source.

Those devices that are good connecting to ground are called current sinks; those good at connecting to Vcc are called current sources. Until recently (the last decade or so), it was unusual for integrated circuits to be good at being both. Most were good at being current sinks but were terrible at being current sources. So at lot of circuits were designed so all the chip had to do was connect to ground to make the circuit do its thing. Many chips still have an asymmetric current drive ability and function better switching to ground than switching to Vcc.

Why you choose one over the other often depends on the capabilities of the parts available to you. For instance, an RGB LED is often a "common-anode" type where the anode (positive lead) is connected on all three LED elements, so to turn on an element you need to connect its lead to ground. You can use three pins on a microcontroller to do this (or three NPN transistors) and they would be acting as current sinks.

Current sources and current sinks both have these valves at the output, to either block current or allow current from outside devices. The difference is simple:

If you connect a current sink to a component that's connected to a low pressure, nothing will happen. Both sides are at the same pressure, so it doesn't matter whether the valve is open or closed, no current will flow. 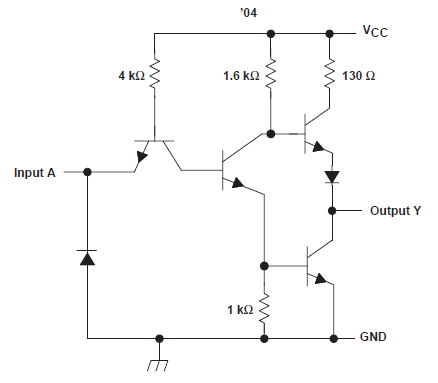 To start with, the floating input. In TTL floating inputs are the same as high, and they're not bad, as they are in CMOS. If you leave the input floating or make it high the second transistor will get current through the input transistor's base-collector junction, so the second transistor will conduct, and create a voltage drop over the 1k\$\Omega\$ resistor, which in turn will cause the lower output transistor to pull the output low. So it's indeed working as an inverter.

The output configuration is known as a totem-pole. It's kind of a push-pull, but with a difference: instead of a complementary NPN-PNP pair it uses two NPN transistors, and the diode an 130\$\Omega\$ resistor make it even more asymmetrical.
As a consequence a TTL totem-pole will be able to sink much more current than it can source, typically 16mA vs 0.4mA. So if you want to use TTL to control LEDs you'll want to connect the LED's anode via a resistor to \$V_{CC}\$ and sink the current.

Adding to todbot's answer. The reason you see thinks better at current sinking was not arbitrary, the transistor is physically one step faster to make with older processes. I also believe it's mobility of electrons is higher, but that is probably a bit too much device physics. -Max

A floating line is one that has a high impedance to the supply/ground system. Floating inputs can behave a bit like little antennas, and pick up random noise from your circuit. This is why unused inputs should either be pulled to +V or ground. Most inputs are high impedance anyway.

A problem you might encounter, though, is when you have an 'open collector' (OC) or 'open drain' (OD) output stage. These devices basically only have the capability to pull the output to ground. When the output is at logic low, zero volts, the next device's input will be held at ground as the output sinks current. But when the output needs to be a logic '1', the output transistor shuts off, leaving you with .. a floating input. So with this kind of connection, you usually see a pull-up resistor to ensure that the voltage on the input doesn't wag around in response to whatever EMI is at hand. The resistor value is usually toward the smaller end of what you can get away with to not overwhelm the current sink capability of the OC/OD output.

The other common situation is 'tri-state' outputs. These are devices that have two transistor output stages, so they can drive '0' or '1' logic levels without aid of a pull-up resistor, but internally to the device there are controls that can turn off BOTH output transistors, resulting in the 'hi-Z' output condition. If you connect a single tri-stateable output to a single input, and conditions allow the output to go into tri-state mode, you get another case of floating input. You'd probably see a pull-up resistor under these circumstances too, for the same reasons as for the OC device. However, tri-stateable outputs are most often seen in 'bus' situations, where one of several devices asserts the logic level, and all others sit in their hi-Z state. Examine the schematic and there's usually a pull-up resistor on that line somewhere.

Here are two images of current sink and current source (e.g in a PLC device):

Note that current sink is often used with micro controllers that may have problem sourcing current.

Figure 1 shows a sinking digital output that is connected to a sourcing digital input.

In this circuit, the load is pulled to ground because of the sinking digital input provided. 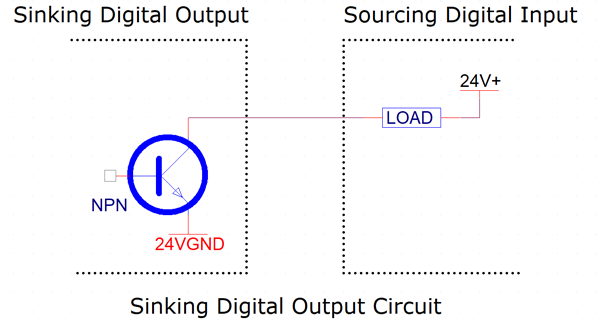 Figure 2 shows a sourcing digital output that is connected to a sinking digital input.

In this circuit, the load is pulled up to receive voltage because the sourcing digital input has been provided. 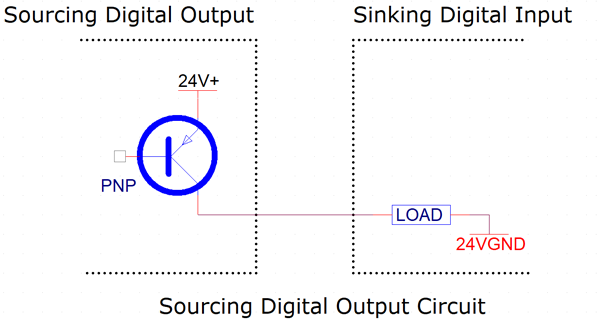 Not the answer you're looking for? Browse other questions tagged led current sourcing sinking or ask your own question.