The following is for hobbyist work and I have no commercial intentions at all. Only a handful (two?) will be built. (I use these for part testing and curve generation, though with the higher voltage compliances I may find still more uses than before.) 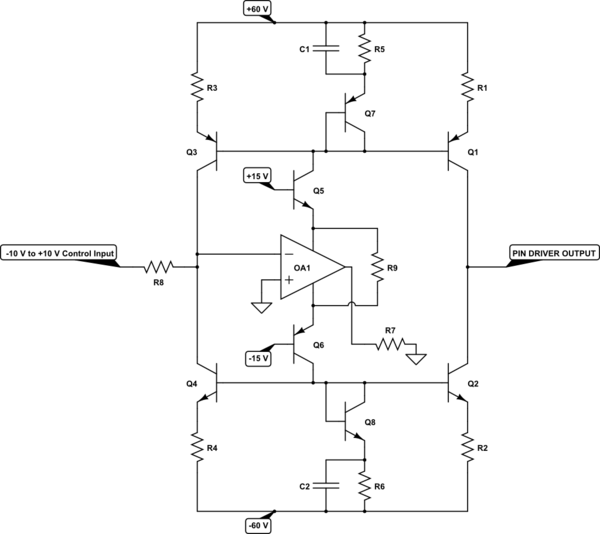 I can imagine setting up yet another pair of voltage rails (close to the high voltage rails, but perhaps \$40\:\textrm{V}\$ closer to ground) and using a cascoded design (using four more BJTs) in order to protect the high and low side matched mirror pairs. That added voltage supply wouldn't need to handle more than \$10\:\mu\textrm{A}\$ or thereabouts, so it may not be all that difficult to construct out of the new high voltage supply rails. But if there are other/better thoughts about the topology I'd like to hear them.

Here's what I mean: 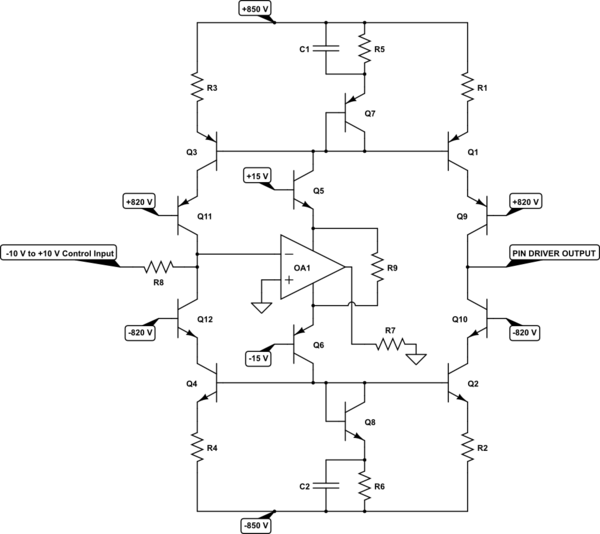 Is there a problem I missed thinking about here, or can I do better? Does anyone have a suggestion of any process by any FAB for discrete BJTs I might consider for the cascodes here?

I also know that I will also face entirely different problems related to clearances and creepage, that I didn't have to face here before. That's a different topic though, which I'll address separately and later. Right now, I'm focused on how to get the significantly higher voltage compliances I'd like to achieve.

The above circuits are also good for another purpose. If I remove (by replacing it with \$0\:\Omega\$) \$R_8\$ and use the inverting input of the opamp as a node into which I can sink or source current, and if I also then place a known precision resistor from the output to ground, then the bipolar voltage at the output will depend on the bipolar current to ground.

It's actually a rather versatile module.

Your circuit looks fine .HV pnp BJTs will be hard to find .I use 600V types for other jobs ,they are cheap and easy to find and reliable .You could series connect them .I have connected up to 4 of these in series without any problems .Otherwise you could go to an all NPN design like something based on a SRPP .I have used cheap 800 V N channel mosfets 2 series per bridge leg to make up to +/- 500 VDC at 1 Ma.

Since there's no inrush of answers:

How sensitive is your application to ripple (~ amplitude, you already mentioned bandwidth)?

Now, you'd control these switches based on the pulse position of when the current across Rmeas crosses the full 1mA (as observed by D2). Calibration might (ok, will) be necessary, but assuming that at a switching rate of maybe 50 kHz is totally sufficient for this application (and that already isn't all that easy, considering you need to drive the gates or bases of the high- and low-side switch at that rate), modern MCUs will be up to the task. I'm sure you'd be able come up with an analog design that might be cleverer than my proposed software one (albeit doing it in software, despite having quantization problems, will definitely make it easy to incorporate calibration data).

I gave the Rectifier* an asterisk because it's not really like I really recommend you'd use a PN diode bridge rectifier here – that won't work, since the diode currents will likely be larger than the measurement currents. An opamp-based precision rectifier on a floating supply might be the solution here (and could be built, cost-efficiently, at the expense of beautiful design, with a battery...). In any case, the whole rectifier – optocoupler – Zener circuit is really just a 1 bit sign-ignoring voltage ADC; a window comparator, or even a proper amperemeter IC with e.g. a digital optical link to the controlling MCU would probably do better.

Obviously, the single-stage RC (1.6kΩ ł 100nF) LPF is just a quick'n'dirty approach here; however, it does exhibit -36dB magnitude attenuation at my 50 kHz switching frequency (and my guess was that this is enough for you) whilst relying on a capacitor value that is still available as a film capacitor for >1kV with a 5% tolerance.

My motivation for this is that it's probably easier to address switching transistors in a finely enough timed manner than to control transistors in a linear enough fashion at the voltages at hand.

Not the answer you're looking for? Browse other questions tagged bjt high-voltage current-source or ask your own question.