Convert 2s pulse into short pulse to wake up ESP8266

I have an ESP8266 that does something, then goes to sleep.

The ESP wakes up when RST pin goes low. I use the PIR output to drive a transistor to pull down the RST pin.

This works fine, the problem is, the ESP only wakes up once the 2 second pulse is over, and this slow wake-up delays the ESP's response. IOW: the ESP needs a short negative pulse to wake up, but only wakes up when the RST pin goes high again. While it is low, it will not wake.

How can I convert the 2s pulse from the PIR into a short pulse, to trigger the transistor, and wake up the ESP faster?

This is a low power battery-driven application (hence the sleep), so I hope there is a simple low-tech solution to this problem which won't blow my power budget.

The LED shown lights up as status to show when the ESP is awake.

The 47k resistor between power rail and RST keeps the RST pin high during normal operation.

Here's the schematic I had mentioned in the comments: 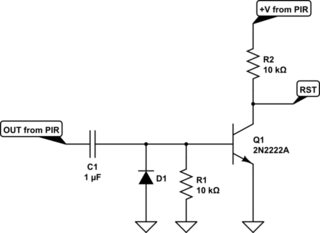 Once \$C_1\$ has developed a charge across it, and \$R_1\$ has helped to fully complete that job, \$Q_1\$ has to completely turn off and the RST line goes back high, again. It will stay there until there is another high-going edge at the left of \$C_1\$.

The pulse width should be on the order of hundreds of microseconds -- long enough to get the job done, I think. 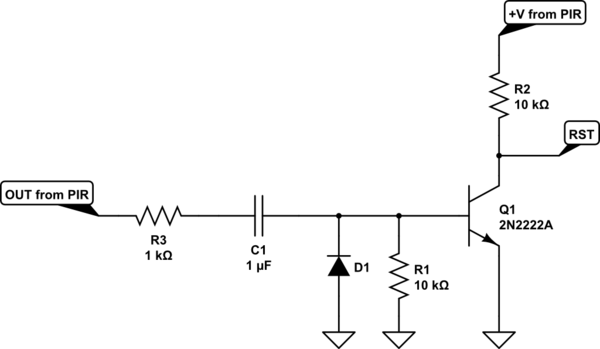 Roughly \$1\:\textrm{k}\Omega\$ should be fine. A little less, if you like. This will limit the base current into \$Q_1\$ and decrease the charging rate, widening the pulse and helping make the behavior better managed than before.

There are other ways that are technically superior. Assuming that the output from the PIR may need to be "shaped," it's output might be fed to a Schmitt trigger circuit with that being followed by a one-shot timer (such as a 74LS121, for example.) Or, with a clean enough output from the PIR (probable here), just the 74LS121 would be enough. These can be set up to trigger on the rising or falling edge of their input (A vs B) and the timing of their output can be adjusted using an RC timing pair. You can choose the sense of the output, as well. So they are quite good for something like this.

But the above circuit might work okay for you. It's cheap and I suspect you already have the parts on hand. So that's nice, if it does work out.

You could of course wake up from Deep-sleep based on the RTC clock instead of reset. Set the clock to say 100 ms and test the movement detector output when you wake. This would give reasonably low power operation and you don't need any extra components at all.

You could also use Light-sleep and a GPIO pin change to wake the MCU, but this will have a higher base level of sleep current at about 900 uA.

See the sleep documentation and here for calculations.

This will differentiate the leading edge of the long pulse into something that still is negative going, but now its trailing edge will occur in only about 5 milliseconds. Adjust the values of the existing 47 K resistor and the new 0.1 uF capacitor for other pulse widths.

Next time, consider posting an actual schematic, with a unique reference designator for each component. This prevents misunderstandings about which components are being discussed.

Not the answer you're looking for? Browse other questions tagged esp8266 pulse pir or ask your own question.

0
Trying to power on/off esp8266 power with a 2n2222a NPN transistor
2
I need a switch that not only detects open/close, but also sends a pulse to wake up an ESP8266 whenever the (debounced) state changes
0
Waking ESP8266 from Deep Sleep Using a Motion Detector
3
How to connect GPIO16 and RST of ESP8266?
5
Reset pulse generator for ESP8266
1
PIR sensor outputs HIGH for too many seconds
2
button which wakes up the esp8266 from deep sleep, but can be used as common button
3
Wake ESP8266 based MCU on contact close/open