1/4 W and 1/2 W are the absolute maximum power ratings. If the resistor is forced to dissipate more than that it will burn.

The forward voltage of the LED is irrelevant for the resistor. But you really need to know the supply voltage you've intended to use. 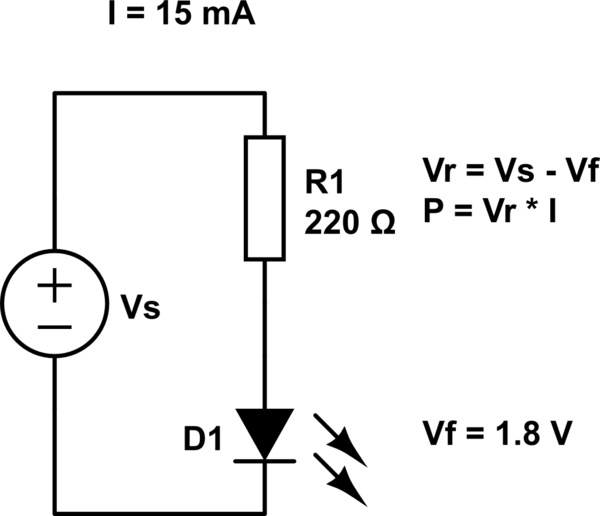 As you see, Vf is irrelevant for the resistor. You need to consider the current and the voltage drop of the resistor.

A 1/4 W rating should be enough to power a LED, if it's not, you're doing something wrong. Do the maths.

As others have said, the power rating is how much power the ressitor can dissipate. There are a few catches tho:

Temprature Coefficient: As a resistor (or any component) gets hot, it's behaviour changes slightly. Semiconductors become more conductive at higher temperatures, metals become less conductive. How much they change is given in a temperature coefficient - how much change per unit temperature. This means that some resistor might be rated to a very high power, but it gets very hot when it dissipates that power. This can be a cause of error in a circuit.

In addition, there is the temperature they are specified at.

Some power resistors, such as metal film or metal wire wound resistors on a ceramic substrate are rated to temperatures as high as a few hundred degrees Celsius. Others, such as carbon film in epoxy, might not tolerate much past 100 degrees Celsius.

Why does this matter?

If you are planning on operating a resistor that is rated to 300 degrees Celsius, you need to make sure that all surrounding circuits can also take this. Electrolytic capacitors will dry out, polyester capacitors might fail short as their film melts, transistors could fail, etc. In fact, this resistor could start desoldering itself because it gets so warm!

Moral of the story: there is more to that power rating than you might think.

So for your application, calculate the power consumption of your LED and select the appropriate resistor. Power_dc = voltage * Current (watts)

Along with all the nice explanations, there is the size factor which is often overlooked by designers. In having 2 options to chose, each one varying in size but both rated to the same power, in general they would prefer the one with the smaller size. However, the smaller body means the same amount of heat accross a smaller surface, which means a higher temperature. In shorts, if you whant to preserve the surrounding devices of the board, whenever possible, select the one with the biggest size.

The power dissipated by a resistor can be calculated two different ways. The first way uses resistor voltage:

The second way is to use the current through the resistor.

Whenever current flows through the resistor there is a voltage drop across it and some amount of power is dissipated across a resistor in form of heat.

Depending on the size and design of the resistor there is a limit to the maximum power that it can dissipate without getting permanently damaged.

Not the answer you're looking for? Browse other questions tagged power-electronics electronic-load or ask your own question.

2
Current controller circuit to drive solenoid bank
1
How is the gate trigger resistor value calculated for a triac
2
How to determine forward voltage for overdriven LEDs
0
Unable to supply FONA 32u4 3.5 v through circuit
0
Battery wasting via voltage regulator
0
R-Cd parallel damping during power on
2
DC current source into capacitor - does capacitor voltage rise infinitely?
0
Setting the output voltage of MAX8792