Does the MOSFET gate have an absolute maximum gate voltage? 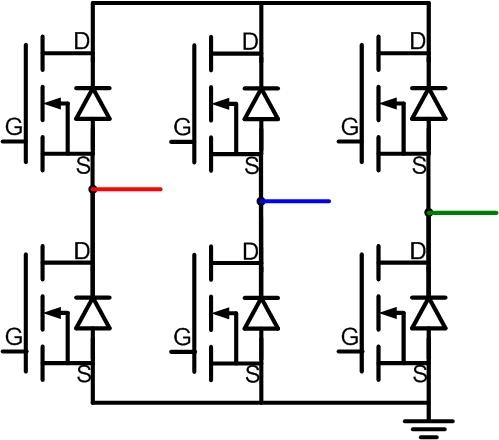 Considering this full bridge circuit , if the bus voltage is about 400 v, Do I need a higher voltage at the gate to turn the mosfet on (to make the gate voltage higher than the source voltage)?

The datasheet specifies the maximum gate source voltage at +-20 v , Does that mean that I maximum voltage at the gate would be 420 v (for example) ? or would that destroy the mosfet ? and can I use a lower voltage than 400 v to turn it on ? 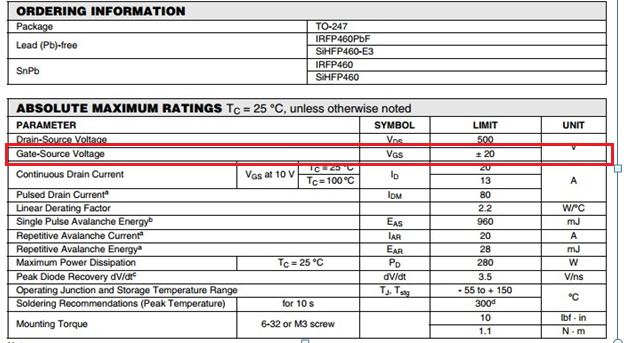 I haven't found any absolute value for the gate voltage in the datasheet and I'm kinda lost.

Voltage is always specified with respect to a reference. Often that is ground, but there's no such thing as an absolute voltage without a reference.

To get good enhancement (low RDSon) your gate must be at least several volts higher than the threshold voltage, so you will need to drive the gate higher than 400V if the source is at 400V.

This is a special case on MOSFET driver. The complication arises when implementing the gate turn on circuit, since the voltage required will be higher than the DC bus voltage.

One of the basic implementations is by means of pulse transformers, so that the secondary of the transformer is referred to the MOSFET source.

Another possibility is the use of integrated circuits, such as the IR2110, which allow floating outputs for the turn on pulses.

For these two forms, the basic principle is the same. It is about having floating outputs that can be referenced to the transistor's source.

The datasheet specifies the maximum gate source voltage at +-20 v

As others have mentioned, the gate voltage can NOT vary beyond the source voltage by more than +-20V in this case, which is by the way a common range.

As such to turn it on you need to apply a voltage greater than the Vgs threshold voltage but not more than than 20V more.

However, stating that is 420V is not quite accurate. When off, the voltage on the source of the high side gates will be near ground, since, presumably, the other end of the load is being pulled low by one of the other channels.

As such, initially you can not exceed 20V relative to ground. Lets say you apply 10V absolute. As the device turns on, you want the source voltage will rapidly rise to 400V, which means the gate voltage needs to rise at the same rate to 410V.

Similarly, when turning the thing off you need to initially drop it to 400V, or more accurately no more than 20V less than the 400V, then have it follow the source voltage as it falls when the load or lower transistor pulls the source down.

Just to add another wrinkle... when initially powered up with all devices deactivated, or when they are all turned off, the sources will be floating at some voltage dictated by the capacitances of the MOSFETS.

I'm sure you are already asking yourself... "How the expletive do I do that!" It is a bit tricky but fortunately there are numerous drivers specifically designed for the purpose that basically provide a gate voltage that is a voltage ADDED to the current source voltage.

4
MOSFET Gate Saturation Voltage Threshold?
3
Understanding MOSFET gate characteristics
1
Does MOSFET switching gate drive current depend on supply voltage?
1
Does this MOSFET datasheet contain missing data?
3
Why does the signal MOSFET keep failing in this circuit?
0
Identify the Maximum Voltage that can be applied across Zener, MOSFET and Transistor
0
Doubts in using UCC27537 Gate driver to drive IPA60R120P7XKSA1 MOSFET
0
H-Bridge chip burning up when applying less voltage than the absolute maximum